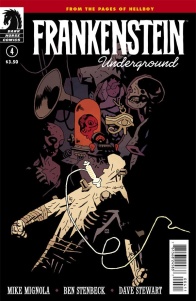 Deep underground, Frankenstein’s monster is taken captive by the Heliopic Brotherhood of Ra. But while their master shares his story, the monster discovers the true history of the lost city and the powers that inhabit it.

In the last issue, Frankenstein’s Creature was captured by a subterranean race (different from the subterranean race we’ve seen before in Witchfinder and B.P.R.D.) and taken to the remains of a Hyperborean city far underground. Surprisingly, there were humans were living there. Well, two of them were living. The rest were kind of undead… 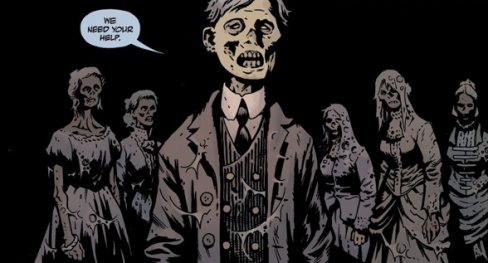 They were also a part of the Heliopic Brotherhood of Ra, and last month’s issue took this opportunity to explore this secret society more than I think Mignola’s books have before.

Even more than the last issue, this one is wrapped up in history and the backstory of its characters. There’s a bit more about the Brotherhood, but its real focus is on the previous inhabitants of the underground Hyperborean city, exploring the history of King Thoth, the spread of the Hyperborean Empire, different masters of Vril, including priests of the Black Goddess. Again, this issue delves deep into history, so for someone like me this was all fascinating stuff.

Finally, there’s the Frankenstein Creature’s history too. It won’t be a surprise to anyone familiar with Mary Shelley’s original novel, but it does cast the character in a different light. It shows how he was once very different from how he is now. He was once much more verbose and angrier. He had a fire in him. The 1956 version of the Frankenstein Creature has been broken, not just by the way he’s been treated and hunted, but by the things he’s done when lashing out at a world that had scorned him. It shows where his reluctance to fight has come from. Frankenstein has a darkness in him, and I’m not talking about a brooding melancholy. He can be cruel and vicious. For those unfamiliar with Shelley’s novel, this issue will explore the source of the Frankenstein Creature’s self-loathing. It provides context for his bitter thoughts in issue two.

Dave Stewart’s colors serve as a guide through these various histories on parade. Yellows for the history of the Hyperboreans, greens for the corruption of the Black Goddess Cult, deep blues for the Black Goddess herself, sepia for the Heliopic Brotherhood of Ra, pale, cold blues for Frankenstein, and black and stony grey for the present. Whenever the events of the present reference these elements, their colors bleed into the scene. Stewart’s colors stitch everything together, which is a good thing, because a book exploring three backstories one after the other could have gone in too many directions. The colors keep everything focused and smoothly transitioning from one story element to another.

Ben Stenbeck had quite a challenge for him in this issue. Significant portions of this issue read like a history lesson, chiefly concerned with what happened. This is completely appropriate for the story, mind you. However, it means that Stenbeck’s work could have easily veered into being simply illustrations of this history and been a very dry reading experience. Instead, he introduces other elements not in the narration. He creates the feelings of these histories. He gives us emotional reactions to the events as they unfold, the scale of the scene, and even a few visual links to previous stories. (Seriously, go back and read Abe Sapien: The Drowning. There’s a certain artifact in play in that story, and there’s another very similar in this one. It’ll give you a sense of what Frankenstein is really dealing with here.)

Of course, this also comes down to the writing. Mike Mignola has made sure that there’s a lot more going on in these histories than just what the narration is saying. He’s made this a very rewarding read for those familiar with his broader universe. This book connects to Witchfinder (A LOT), to B.P.R.D., to Abe Sapien, to Hellboy in Hell (indirectly)… maybe there’s even a Lobster Johnson connection I missed. It wouldn’t surprise me. (There was as Ben Stenbeck pointed out later. Page two of issue one. How could I forget about that?)

Yes, this book can be read by people completely unfamiliar with the Hellboy Universe, but there’s a lot more to it for those that are familiar, and I have a strong feeling there’s even more connections here to future stories.

And on that note, let’s verge into spoiler territory. Jump ahead if you haven’t read the issue yet. Or it you want to avoid my mad rambling… 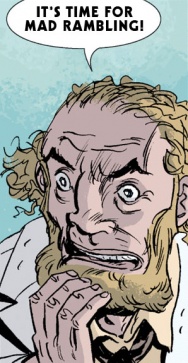 In the beginning of this issue, King Thoth sent seven women to be the hearts of the new Hyperborean cities, women blessed with the power of Vril. By the end of this issue we know what happened to one of them, but not the other six. I can’t help but think one of them is somehow tied up in the origins of Elizabeth Sherman’s powers. I’ve no idea how. Although we do know from B.P.R.D. Hell on Earth: Flesh and Stone that Gall Dennar and his fellow prehistoric humans lived on ancient North America, and we know from B.P.R.D. Hell on Earth: The Abyss of Time that Gall Dennar’s grandfather discovered his Hyperborean blade in the ruins of a Hyperborean city… so it’s very likely that there are the ruins of a Hyperborean city in North America somewhere.

More and more Liz is a big question. In the early days I didn’t question her powers much. I just thought occasionally people were born with odd powers. People like the psychic Izar Hoffman and “the human metal detector” Sidney Leech. Over time though, it’s become apparent her power is unusual and very significant.

I can see the bigger picture of why Memnan Saa took her to Thadrethes in B.P.R.D.: The Black Goddess. It wasn’t just to fight the frog monsters and Servants of the Left Hand. I’m pretty sure he was going to make her the heart of his newly risen city.

Liz’s power isn’t the sort of thing she was just born with by some fluke of genetic lottery. Somehow she’s connected to Hyperborea. What that connection might be, I have no idea. If anyone has any theories though, I’d love to hear them.

Spoilers and general mad ramblings over.

Frankenstein Underground really is an odd book, and I mean that in a good way. At first it seems like it’s at the periphery of the Hellboy Universe, but it’s actually tangled up in the foundation of its mythology. With only one issue to go I’m very curious to see where it goes next. With all this set-up, it feels like it must be something quite grand in scope.