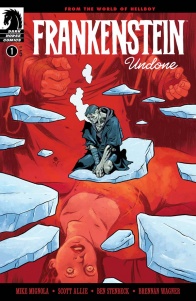 Frankenstein’s creator lies dead in the icy grip of the Arctic, and the monster searches for a new purpose. Just as he thinks he’s found one with a group of unlikely companions, disaster strikes—and the monster is catapulted out of Mary Shelley’s novel and into the world of Hellboy.

Mark Tweedale: This may be a weird way to kick off a review, but this is something that I thought was a weird way to kick off “Frankenstein Undone”: On the interior cover where the creatives involved are listed, there was no mention whatsoever of Mary Shelley. Considering that a significant portion of the first issue is an adaptation of the final scene in Mary Shelley’s novella, including large portions of the Frankenstein monster’s final speech, this felt like a bizarre oversight, and something I hope Dark Horse will fix for the trade paperback.

Christopher Lewis: I didn’t realize the beginning narrative and dialogue was from Shelley’s Frankenstein. It makes sense now that you say it, as the vernacular and cadence at the beginning of the story is very different as compared to Mignola’s writing style, and changed once Frankenstein left the ship. Since it directly bridges Shelley’s story to “Frankenstein Undone,” it is a no brainer to give her credit.

Mark: They’re not coy about that. The solicitation for this issue was quite explicit, so it just seems like an oversight. The introduction threw me a little bit at first, because I only had a very hazy memory of it in my head. The last version I read of it was Junji Ito’s manga adaptation, which did away with the final scene. Frankenstein’s monster simply feels Dr. Frankenstein’s passing and wails in the snow before disappearing forever, and while that doesn’t sound like much, the visuals were so striking they’d sort of replaced the novel’s ending in my head.

There have been so many versions of Frankenstein, that I’m not sure many people will recognize the scene for what it is. The line, “I shall seek the most northern extremity of the globe, and collect my funeral pile, and consume to ashes this miserable frame,” was what finally jogged my memory.

Chris: The part that impressed me the most was the transition from Shelley’s story to the beginning of Mignola’s. A lot of credit has to be given to Ben Stenbeck here who is a master of facial expressions and staging. At the beginning of the story Stenbeck presents Franky looking like a despicable monster with harsh features. At no time did Stenbeck show Franky’s eyes, which gives him a kind of distance from the reader. I mean there is only one close up of Franky’s face at this point and I immediately thought he looked like a killer.

Then Stenbeck transforms Shelley’s ‘Monster’ into Mignola’s Frankenstein during the polar bear scene. There were no words, just Franky’s face softening and his tortured eyes emerging as he was accepted by the bears. The art said everything and at this point I finally recognized the Franky from “Frankenstein Underground.” Stenbeck really knocked it out of the park.

Mark: I agree. Something that becomes apparent very quickly in this issue is that Frankenstein isn’t the Frankenstein we know from “Frankenstein Underground.” Shelley’s take on Frankenstein’s monster really put the emphasis on the monster aspect. He’s a far less sympathetic character than later interpretations were, such as James Whale and Boris Karloff’s, which I believe is where Mignola drew much of his inspiration.

So Stenbeck and Allie have to bridge this transition from Shelley’s monster to Mignola’s Frankenstein, and it’s not a task they take lightly. The conflict between these two versions of the character is the heart of this first issue. I couldn’t help but notice the care they took with some details, such as Frankenstein’s “long locks of ragged hair,” as described by Mary Shelley in the novel, rather than the shorter hair Frankenstein had in “Hellboy: House of the Living Dead,” and “Frankenstein Underground.”

Chris: For sure. The change is deeper than physical characteristics, Stenbeck and Allie also modify Franky’s posture to be more tense and appear like he is ready to attack versus the beat-down Franky from “Frankenstein Underground.” The only time I saw a glimpse of the Franky we know was during the polar bear scene.

Mark: That ended up being my favorite part of the issue. About a week after I read this issue, I was looking online for a “Frankenstein Undone” cover and I couldn’t find it. That’s because the image I had in mind had never been a cover, but rather a panel from this sequence. That’s how iconic some of the moments were in this sequence—they had the impact of a cover. 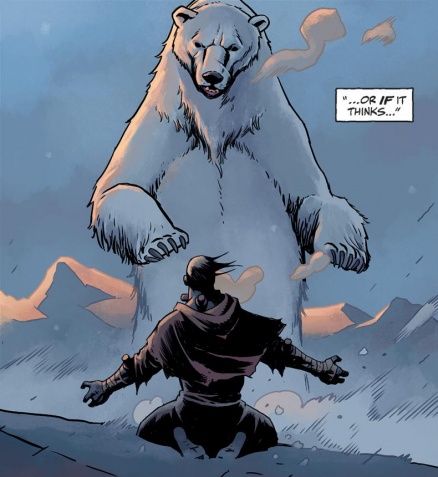 It’s fantastic that such a large portion of this book lets Stenbeck’s work takes the wheel. Colorist Brennan Wagner’s and letterer Clem Robins’ work push it to another level too. I’ll have to talk about Wagner’s work in greater detail in a future review when we’re delving deeper into spoiler territory, but I want to focus on Robins’ work here. Often, a letterer’s work ends up being an invisible part of the reading experience—it simply works without consciously jumping out at us—so it’s easy to overlook what it’s doing. In this sequence, however, we’re meant to consciously notice the sound effects. They’re a major part of the storytelling in this sequence.

Notice Robins’ isn’t switching up the lettering style massively during this sequence. A “ROAWR” is still the same style as a “SNORT,” and that’s important because it makes the subtle differences more important. A “SNORT” is written in an even line, whereas a “ROAWR” has a turbulent line. A “KRACK” has the text more compacted, as though it’s been crushed by the force of Frankenstein’s punch. Robins’ doesn’t just give us sounds that look cool, he gives us sounds that evoke their texture and emotional qualities, and in a sequence as emotionally driven as the polar bears one, the strength of his work comes through loud and clear.

Chris: Something has been nagging at me. The writing credits for this comic go to both Allie and Mignola, however based on the pacing, panel layout, and dialogue; this feels completely like Mignola written story. Did you get the same vibe?

Mark: No, it was a mix of both for me. In a way, I think “Frankenstein Undone” is better suited to Allie’s writing style than “B.P.R.D.,” since I’ve found he’s at his best in scenes with only a few characters. His work becomes more focused. Also, I think he’s got good instincts for what images alone can communicate (maybe this comes from his editing background), so he tends to write scenes with minimal dialogue well, and that definitely came through in the polar bear section for me. It reminded me of the best of the “Abe Sapien: Dark and Terrible” cycle.

I sense Mignola in the layouts, but then that could just be Stenbeck. They’ve worked together for so long, Stenbeck has an impeccable understanding for how Mignola would layout a page without being a mimic. Especially with those beats of black panels, that feels like a Mignola book immediately.

Anyway, let’s get to grading. What are you giving this?

Chris: I am going to have to give this one a 9. I was thoroughly impressed with all aspects of the book and am looking forward to the next issue.

Mark: I’m giving it an 8. Everything is great, but I get the feeling the opening is a bit of a hurdle for people unfamiliar with Shelley’s book.

Final verdict: 8.5 – This was a great issue from the entire creative team—writing and art, this book is firing on all cylinders.