It’s always nice to see obscure characters get their time to shine. You can read about Superman anytime. The Dark Knight’s not going anywhere. Come read the adventures of the Freedom Fighters! Doll Woman! Human Bomb! Phantom Lady! Black Condor! Not to mention the Yankee Doodle Dandy himself, Uncle Sam! 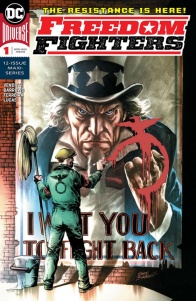 Written by Robert Venditti
Penciled by Eddy Barrows
Inked by Eber Ferreira
Lettered by Deron Bennett
Colored by Adriano Lucas
Line up for this all-new maxiseries set on Earth X, where the Nazis won World War II! Twenty years after invading and occupying America, Germany wiped out all metahuman resistance, including the original Freedom Fighters.

Fast-forward to the present day, and a new team of Freedom Fighters emerges to challenge the Nazi occupation once again. But if they’re to have any chance of victory, they’re going to need Uncle Sam-who disappeared after his original team was killed. The 12-part epic “Death of a Nation” storyline kicks off here!

I am morbidly curious as to how the neo-nazi, alt-right movement gained so much traction in recent history. I mean, Nazis are horrible. Emphatically, undeniably monstrous. The United States of America has been and is divided on many issues. Liberals and conservatives often don’t see eye to eye. However,everybody in the country collectively agreed that Nazis were bad. Comic books were all on the same page too and reflected the time. You can’t get any more clear than Captain America socking Hitler in the jaw. Today, unfortunately, such fascism is starting to loom its ugly head again. Once more, the comics comment on the times in “Freedom Fighters” #1.

The basic conceit of “Freedom Fighters” is that Hitler won World War II and took over America. The bulk of the issue is setting up the history of this alternate reality and getting the readers caught up to the present day where the action will take place. In 1963, the last vestiges of the American Resistance Underground meet in secret with leader Jesse Owens (who famously embarrassed Germany at the 1936 Berlin Summer Olympics), the Human Bomb, Doll Man and Black Condor. They are ambushed by Nazi metahumans and executed, save for Jesse Owens, who is given hard labor. A disheveled Uncle Sam watches in horror and is similarly ambushed. Instead of being captured, he simply fades away.

In the present on Earth-X, America is firmly under Nazi control. The Freedom Fighters’ execution, or the ‘Red Friday Massacre’, is now a national holiday and the twisted fascists have converted the Resistance hideout into a Nazi museum. General Sauer, who burned the Human Bomb to death, is given a private tour of the museum so he can muse over past victories. A new Human Bomb sneaks in and explodes, burning Sauer in revenge. He is joined by the rest of the new Freedom Fighters and they make their public debut. While some of the people are swayed by their words, the Nazis are not. The issue ends with the Freedom Fighters at the mercy of a giant Nazi war machine.

One of the things that struck me about this comic is there is absolutely no gray area. Good is good and evil is evil. There are no morally complex villain in the vein of Black Adam or Magneto. The Nazis are malicious, sinister and sure in their self-perceived superiority. They don’t let children play baseball because it is an ‘American’ pastime. General Sauer is all but too happy to regale others with his atrocities. The Nazi metahumans, the Plastic Men, wipe out the Resistance with wicked glee. Upon Jesse Owens’s capture, the news anchor taunts “How does first place feel now, Mr. Owens? You could run, but you couldn’t hide.”.

On the other side of the coin, the good guys are straightforward too. They hate ‘ratzis’ and love freedom. The most straightforward of them is Uncle Sam. This hero makes Captain America look tame by comparison. Steve Rogers can run around with the Avengers and do the superhero thing without waxing poetic about the country. With Uncle Sam, it’s USA, 24/7. He’s dressed in red, white and blue from head to toe and rocking a top hat, there’s not much subtlety there. Uncle Sam is over the top, in the very best way. Shouting “You want one last piece of apple pie?” as he wallops a ‘ratzi thug’ is very fitting for his character.

The artwork in “Freedom Fighters” #1 pulls no punches. The opening ambush by the Plastic Men is the stuff of nightmares. While Eel O’Brien uses his powers for comedy, the Nazis use theirs for horror. The inhumanly wide grins and shadowed faces are terrifying. The way they reveal they were hiding in plain sight as a flag or door. There’s one panel where a Plastic Man unhinges his jaw and swallows Doll Man whole that makes me shudder.

Reader be warned, the art depicts the horrors of war in graphic detail too. It’s upsetting to see the execution of the Freedom Fighters. The Human Bomb is clearly screaming in agony and Doll Man’s head has been detached from his body, blood splatter everywhere. General Sauer and his lackeys were evil but I could definitely have done without seeing their charred corpses. Still, this was a very gripping issue that had me invested from the very beginning. There isn’t a dull moment from start to finish. This marks a strong start for the maxi-series.

Final Verdict: 8.0 – The Freedom Fighters take the fight to those Ratzi thugs!