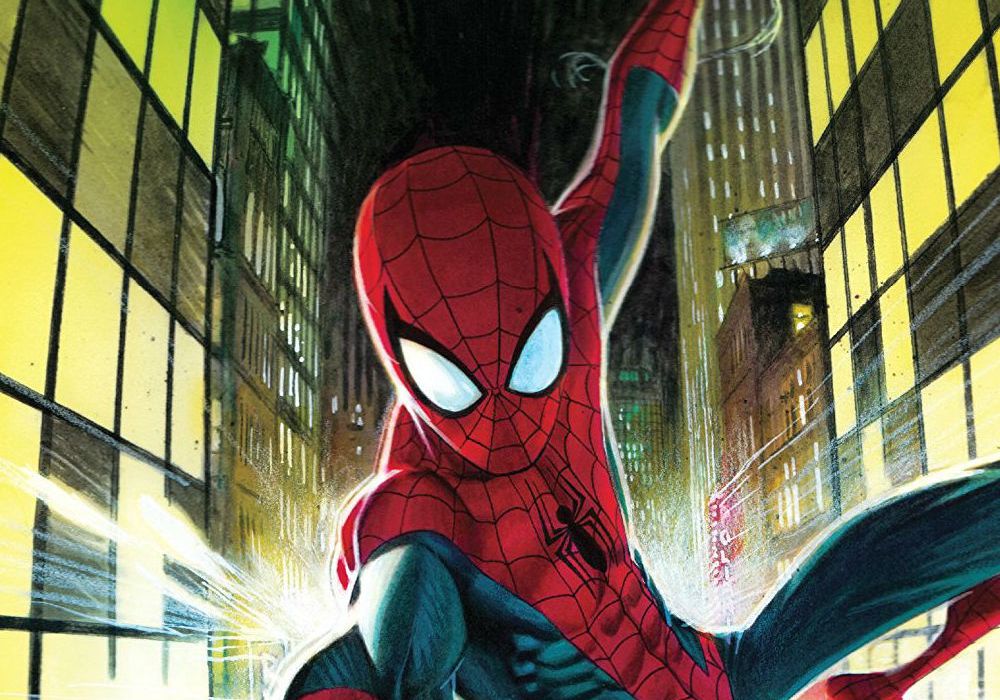 Spider-Man is probably (if not definitely) Marvel’s most popular superhero. Sure, over the past decade, the likes of Iron Man and Captain America have had surges in mainstream popularity but the webhead’s been an American icon for generations. It’s no wonder that Sony has been so reluctant to share. Since he’s so well-known and beloved, many writers and artists are eager to get their turn with Peter Parker. Tom Taylor is the latest writer to get handed the keys to the proverbial ‘spider-mobile’ and seems to be off to a great start. 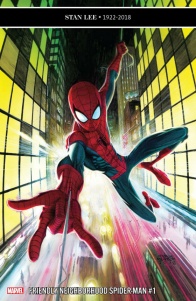 Written by Tom Taylor
Illustrated by Juann Cabal and Marcelo Ferreira
Lettered by VC’s Travis Lanham
Colored by Nolan Woodard and Jim Campbell
Spider-Man is the worst neighbor EVER! There are always crazy villains and property damage and drama and…and he CATCHES the villains. And he tries to fix the damage and he helps carry your groceries and actually that property damage keeps the rents down. You know what? Spider-Man is the best neighbor ever and this book will give you a closer look at Spider-Man’s (and Peter Parker’s) neighborhood than any book ever. Also, it wouldn’t be a Spider-Man adventure without a threat that could destroy not only Spider-Man, but all his neighbors.

Tom Taylor has been writing comics for years, though I’m not all that familiar with his bibliography. Reading this comic reminded me of one of his few works that I do know well, “Injustice: Gods Among Us: Year Four Annual” #1. That pick is probably a bit random, but I can’t recommend the issue highly enough. It’s hilarious with very strong characterization, focusing all on the DC character Plastic Man. I didn’t even like Plas’ but Tom Taylor brought me around.

There’s strong characterization in “Friendly Neighborhood Spider-Man” #1 as well. It’s always great when creators focus on the ‘friendly neighborhood’ part of Spidey. Peter can go on outer-space missions with the Avengers or be a loner but Spidey’s always been a man of the people. That’s why Tom Holland’s Spider-Man will do a flip to amuse a street vendor and why you can high-five civilians in the PS4 game. It’s an essential part of the character and it’s heavily focused on in this issue.

#1 opens with Peter leaping into action to save a father and daughter from a fiery car crash. When offered money from the grateful father, Spidey declines and directs the man to give to some homeless veterans instead. The webslinger hurries back to his apartment building just to help an older neighbor carry up her groceries. When this neighbor, Marnie, directs him to another neighbor who may be in trouble, the hero doesn’t hesitate to help out. When he leaves her alone for a little bit, shady characters snatch her up. She did manage to leave behind a clue though, two (Inhuman? Mutant? Alien?) children. It’s a strange curveball that I’m anxious to see expanded upon in following issues.

This issue may be a more low-key affair than “Amazing Spider-Man” by Nick Spencer but it is by no means boring. Taylor has a good grip on what makes Peter Parker tick. He was selfish once in his life and it led to tragedy. Ever since, Spidey has been selfless. The comic reflects that, focusing on him helping people every step of the way through this issue. Even in Peter’s opening narration, he explains how he initially got over his fear of being Spider-Man by focusing on others who need him. I’m also hoping to see more of his neighbors. Of course, the titular character gets the spotlight but Marnie is great in her supporting role and even Boomerang is hilarious in the one page he’s given to shine.

Juann Cabal’s art is great too. Using Boomerang’s page as an example, the little touches make it funnier and sell how big of a jerk he is. The sleazy haircut, half-eaten food everywhere,’Skrullcandy’ headphones, his unashamed expression when busted for wearing someone else’s underwear. That opening spread is absolutely gorgeous too. Spider-Man swings through the city while iconic moments of his life are shown on skyscrapers behind him. There’s the initial spider-bite, Gwen Stacy’s death, his first meeting with MJ and the ‘Spider-Man No More!’ moment just to name a few.

I loved the back-up story as well. It goes along great with the main tale, also devoted to showing quieter, more human Spidey moments. It opens with a quiet skyscraper breakfast between Peter and Mary Jane that’s cute and much appreciated (heaven knows that relationship has been a roller-coaster). Peter ends up being late to meet with Aunt May, who’s on edge and secretive as she heads out. The webslinger tries to follow but stops to help out a boy being picked on. The hero ends up getting sidetracked, riding with the youths to teach them about bullying. It’s definitely a uniquely Spider-Man think to do. It’s an earnest, small thing but I can’t imagine Batman or Iron Man doing the same. May arrives at a hospital where Wilson Fisk is having a photo op. She pauses to tell him off for a moment before heading inside. Unfortunately, it seems she’s ill again. It isn’t necessarily new territory, but I do want to see where Taylor is headed with it. Time reading “Friendly Neighborhood Spider-Man” #1 is time well spent. It’s an engaging read that hooks its audience and is a great jumping on point for new readers. I can’t wait to see where this all goes.

Final Verdict: 8.0 – “Friendly Neighborhood Spider-Man” #1 brings readers a Spidey for the people, by the people.