When the Hate Monger (THE HATE MONGER) tries to ignite a race war that would change American history, Nick Fury Sr. and Jr. team up to save America. Check out our review below the jump and be wary of minor spoilers. 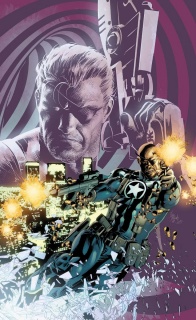 Written by David Walker
Illustrated by Scott Hepburn
• A mission 50 years in the making!
• When a villain from the past shows up in the present day, Nick Fury is forced to team-up with Nick Fury Sr.!
• Will the Nick Fury of the present be able to work alongside his father?

You’d think, after making such a big deal out of putting Nick Fury Jr. into the spotlight they would try to do as much as they could with the character. And while he played an ensemble role in “Secret Avengers” and yelled at someone in “AXIS”, Jr. hasn’t really done much since his dad turned into a crazy moon voyeur (don’t ask). “Fury: SHIELD 50th Anniversary” (or just “Fury”) tries to bridge the gap between the two superspies by teaming them up on a time traveling adventure. And while it’s not the story that’s going to put Fury Jr. on the map, “Fury” #1 is still a nice one shot that helps flesh out the modern character while tying the older one into some relevant political discussion.

After the Hate-Monger sends himself and Fury Jr. into 1965, Fury Classic agrees to help Fury Jr. stop Hate-Monger from aggravating the Watts riots. The riots actually get tied pretty nicely into the story as the two Furys remarking how things never change in America when it comes to police violence against African-Americans. The Watts rebellion is never cheapened as a plot device, but used as a conversation piece that links the two Furys as two weary men tired of all the fighting and corruption in America. It’s a genuinely insightful moment into Fury Jr’s mindset and one that helped him seem closer to his predecessor without being a carbon copy.

Aside from the Furys having a father-son bonding experience, the major plot of “Fury” revolves around the Hate-Monger’s evil plan which is confused at best. He’s trying to kill a child named Barry and there’s no real explanation of who the child is? Like I can’t tell if he’s meant to be a young Marvel character or a historical figure. I’m glad they didn’t go overboard and throw in something like “Thanks for saving my baby, Mr. Fury! His name is MALCOM X!” But a quick footnote for the slower of us would have been nice. Otherwise Hate-Monger’s plan was to just go around stabbing people which doesn’t seem like the operation HYDRA would put money towards. Nah, they probably would. To be fair, Hate-Monger’s not alone in terms of having crazy moments. When pulling a gun on a child he insists “THIS IS FOR AMERICA!” before Fury Jr. rushes in, says “No, THIS IS FOR AMERICA!” and punches him in the face. Because nothing defined this country like beating up people with clear mental health problems and one-liners.

As clunky as the dialogue can be at time, Scott Hepburn’s able to conjure some powerful imagery, especially the page with a fist-clenched Fury ranting against how the Watts protest is “meant to be” according to SHIELD’s timeline protocols. The violent images behind him are the type that could apply to 1965 or 2015, and it’s that ambiguity that really helps sell the idea that both men are fighting a problem with no foreseeable solution. Both Furys are men looking for peace, and that’s a sentiment nicely illustrated in the final page when Fury Jr. raises a glass to his absent dad. It’s a small moment, but one that helps humanize Fury Jr. more than his countless trying of guest appearances. And it’s the type of moment that’s going to be needed more and more often if we want Fury to remain a vital player to the future of Marvel.

Final Verdict: 7.1 – Despite some clunky dialogue and a vague plot, “Fury” #1 does a strong job of showing why Nick Fury is a character who matters. Hopefully other writers will pick up on the characteristics present in this issue and do more to flesh Fury out as a person. “Fury” #1 isn’t the best Nick Fury story by a long shot, but it’s a nice cornerstone towards making Nick Fury Jr. feel like a viable successor to the Fury mantle.