Of all of the books that DC is launching as part of their new Hanna-Barbera initiative, “Future” Quest” is the only one that doesn’t totally throw out all that has come before. When reading this first issue, it becomes clear that the creators have a deep affection for these characters, and that is infectious for the reader. Keep reading for our spoiler free review. 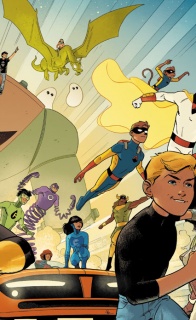 When the adventurous and inquisitive Jonny Quest and his adoptive brother Hadji make a startling discovery in the swamplands of Florida, they are pulled into an epic struggle between the Space Rangers and a dangerous villain who threatens the galaxy. Now it’s up to the combined forces of Team Quest, Inter-Nation Security, Space Ghost, and a host of Hanna-Barbera’s greatest action heroes to stop him and save their universe!

Don’t miss the start of this new, monthly series that features character designs by comics superstar Darwyn Cooke and kicks off with an extra-sized story and a wraparound cover!

A couple of years ago, Parker and Shaner came together to work on “Flash Gordon,” a Dynamite series that revitalized the King Syndicate character, while bringing old school Flash fans, like myself, out of the woodwork to celebrate a character that hadn’t had a great comic story in a long, long time.

Parker and Shaner are given a similar task here, to bring the Hanna-Barbera adventure heroes out of the woodwork (and off of the Cartoon Network), and return them to an action-packed comic that reminds people why these characters were so successful at one point. The challenge, as it was with “Flash Gordon,” is getting people who have no affinity for these characters to dig in and pick up the book. In this first issue, they do a fine job of establishing a world that is equally as inviting as it is exciting.

The main characters of this issue, and seemingly the book as a whole, are the Quests – Jonny and adopted brother Hadji, as well as their scientist father, and adventuring bodyguard, Race. In many ways, this also reflects “Flash Gordon,” as we have a scientist father and his adventuring son, but the additional presence of Hadji and Race bring something really interesting to the table. As Parker told me earlier this month, Hadji takes after Dr. Quest, whereas Jonny takes after Race. This little bit of information colors the interactions in a really fun way.

And speaking of fun, Shaner does incredible work making the boys act like boys. When they’re taking jet packs out for a spin, each of their personalities shine through – Jonny is doing crazy stuff, and Hadji is being far more careful and restrained. But even Hadji, while being cautious, still is enjoying his time flying around the Everglades. These aren’t the dour kids of recent “Teen Titans” runs, or the sullen, ‘tough’ kids we see in many X-books. These are happy kids, and their energy is infectious.

And that is one of the keys to this book – there are big things happening, big, scary things, but the sense of hope and joy is never lost. To reveal too much about the actual plot would be a little too spoiler-y for my taste, but I can say this: there are strange occurrences that blur the line between our world and others, and while the Quests are exploring these, they are doing so with a wonder that draws you right in.

One of the most important aspects of this book, to me, and what sets it apart from “Scooby Apocalypse” and the like is this: these characters might be updated, but they aren’t really changed. Sure, the looks are slightly tweaked (by the late, great Darwyn Cooke), but they are tweaked to highlight what makes them special, not just give them a silly mustache. Shaner (as well as Steve Rude, who does a few pages in this issue) manages to draw books that feel timeless, equal parts retro and modern. This book wouldn’t have looked really out of place at any point in the last thirty years or so; that’s a wonderful thing, and allows these characters, many of which debuted in the 60s and 70s, feel perfectly at home.

I don’t want to reveal which of the sprawling cast shows up in this first issue, but let’s say that you’ll recognize at least two of them from popular culture. And pop culture has an interesting place in this story; for many folks, Harvey Birdman: Attorney at Law, Space Ghost: Coast to Coast, and, tangentially, The Venture Brothers are the way that these characters are familiar to the masses. Well, this book isn’t a farce, and it doesn’t reference those comedic tropes from those series. It might be weird to learn, for instance, that Birdman’s first name isn’t really Harvey.

But the book isn’t a stone cold serious affair, either. Because of the joyous tone, the book never feels dour, and so it isn’t as jarring as seeing Space Ghost show up in, say, the New 52. The tone may not be the same as those shows, but the similar look and lighter tone (in places) can make the transition pretty smooth for new readers who have watched those shows.

But the real selling point – no offense, Jeff – is the incredible art. Shaner and Rude are among the best in all of comics, and their work here (stitched together by the not-unsubstantial contributions of colorist Jordie Bellaire) is full of life and vibrancy. There isn’t a single page in this issue that doesn’t draw you into this world, whether an alien past or sunny Florida, and make you want to learn more about the characters and the world.

In fact, my only real criticism of the book is that, given the press and the cover, it feels a little smaller than I hoped it would be. I have no doubt that the book will get there, but right now, it seems like a tease to have a cover that full of amazing characters, and only meeting a handful of them. I know this is for the best, but I want my adventure, and I want it now!

Final Verdict: 8.2 – A strong start that only scratches the surface of what “Future Quest” can be.