Post ‘Revoloution,’ IDW’s Hasbro properties have seen an upheaval as they become more interconnected. “G.I. Joe”, the self-proclaimed Crown Jewel of the Hasbro Universe, has so far been a consistent heavy hitter of good quality comics. Let’s see if they can continue to capture the magic that made this property so beloved. 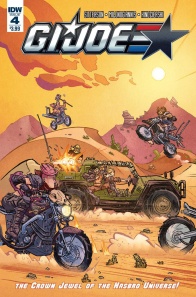 Outnumbered and outgunned, the G.I. Joe field team hits the road with a captive and ranting Crystal Ball, but the Dreadnoks are hot on their heels! Meanwhile, Lady Jaye & Gung-Ho, with their cover blown, struggle to fight their way out of Athens. And a terrifying new threat rears its head in the Crown Jewel of the Hasbro Universe! From the explosive creative team of Aubrey Sitterson (Street Fighter x G.I. Joe) and Giannis Milonogiannis (Prophet).

Aubrey Sitterson doesn’t hold anything back here, delivering the most balls-to-the-wall script this series has seen yet. As someone who’s never been particularly interested in G.I. Joe before (i.e. a Millenial) I was immediately immersed and thrust into their world. There’s some great character moments here, especially Quick Kick’s mid issue ‘METEOR HAMMER’. Sitterson truly embraces the campy 80’s roots of the series with these quirky additions, like the Joes’ oversized artillery and Buzzer’s double-sided chainsaw staff. It’s clear he’s having a ball writing this script, and this type of infectious fun translates over to the reading experience.

On top of this, I love the interconnected Hasbro Universe experience in this comic. The addition of the Decipticon Skyward into the team adds a great contrast to the generally optimistically minded Joes. The team dynamic this creates is pinpoint perfect as Rock asks Skywarp at the end of the mission awkwardly if he could turn into a jet and transport them home instead of waiting for transport. Similarly, the addition of Dire Wraiths as antagonists raise the stakes as opposed to rehashing the usual villains. On top of being powerful aliens, their ability to camouflage with humanity makes them more dangerous and original.

I should mention that as fun as this comic is, it can be a little hard to follow at the best of times. In the middle of the issue, a literal ancient God pops out from under the earth and scrapes away the Dreadnoks like it’s no big deal. But it disappears after two pages of screen time and little explanation as to what it was, leaving me with a kind of disoriented feel. The large cast of characters is also a little unbalanced, as fun as they are to watch in a firefight. I found myself constantly having to look back through the comic to remember not only names but what each person specifically did, especially Roadblock, who served as the driver for most of the comic. It might work better for older fans or readers, but as a new reader it was a little unfriendly.

Giannis Milonogiannis has an incredibly fluid and sharp style that works perfectly for the setting of this comic. Every character is distinctively rendered and feels layered – the most obvious being Scarlett right from the start as she’s burdened with some tough decisions. She doesn’t appear a lot in this issue, but it’s interesting seeing her mood change with her decisions – her uncertainty with the issue of Doc changes into a steely cold sharpness at the end of the issue. It’s interesting to see in this very scene that Roadblock almost takes the burden from her – Milonogiannis draws him with a lot of hesitation and anger in his expression as he grapples with the task of apprehending Doc.

The real visual treat here is of course the Mongolia car chase scene. Milonogiannis gets to go crazy with insanely fun vehicles, weaponry and action scenes. He has a strong sense of motion in sequential storytelling, particularly when Buzzer goes to cut the Joes’ wheels and Quick Kick jumps onto the sawblade, runs up the staff in the next panel and knees Buzzer with a satisfying KRAKT in the final panel. It’s cinematic and creates a lot of momentum in the scene, making the final payoff all the more satisfying. On top of this I love how the Joes’ arsenal verges on 90’s Liefeld “X-Force” in terms of sheer size and ridiculousness. It pairs up well with the overall aesthetic and tone and makes the action a lot more fun, rightfully climaxing as we’re given a half page splash of the Joes standing in line and firing at the camera.

Another thing Milonogiannis nails is his sense of scale. Throughout, we’re treated to not one, but TWO massively imposing figures in Skywarp and the Ancient God, and both feel suitable intimidating. One of the subtle touches I like with this is right at the beginning, the first scene has Skywarp’s foot silhouetted as he’s too big to fit in the actual scene, giving off a very immense feeling. A more immediate and impactful use of this occurs just as Skywarp arrives in Mongolia, he lands behind the team of Joes with a huge THOOM, and towering at least three times their size even when kneeling. This works just as well on the Ancient God, who gets a complete splash page to erupt from a fissure and literally explode onto the scene. It’s beautiful cinematic storytelling, but only in a way that the comic book medium could pull off.

In a comic like “G.I. Joe” that revels in its neon aesthetic, it’s important to have a strong colorist, and Lovern Kindzierski works wonders. One of the best aspects of his work is how every punch, kick or “METEOR HAMMER” super move is highlighted with a yellow or orange palette, separating it from the largely grounded real-world palette surrounding them. But I do love his ability to convey tone, especially in the Ancient God reveal. The whole scene is dowsed in a sinister set of oranges and purples, which flashes for the time the God is present and fades back to normal cleverly as he disappears. It’s a great way to tell the story without directly alluding to it through the script, and Kindzierski clearly knows his stuff.

While it may not be the most new-user-friendly comic around, “G.I. Joe” #4 knows what it’s fans wants, and delivers. Each page exudes a confidence and polish that immediately sets it above other licensed properties. Sitterson’s script is the best type of infectious fun that caters brilliantly for Milonogiannis’ hyperkinetic art and Kindzierski’s boldly neon coloring. If this is the direction IDW’s Hasbro universe is heading in, I’m onboard for the ride.

Final Verdict: 8.1 – A sublime action experience that although is light on character work, takes full advantage of its source material with balls-to-the-wall fun.