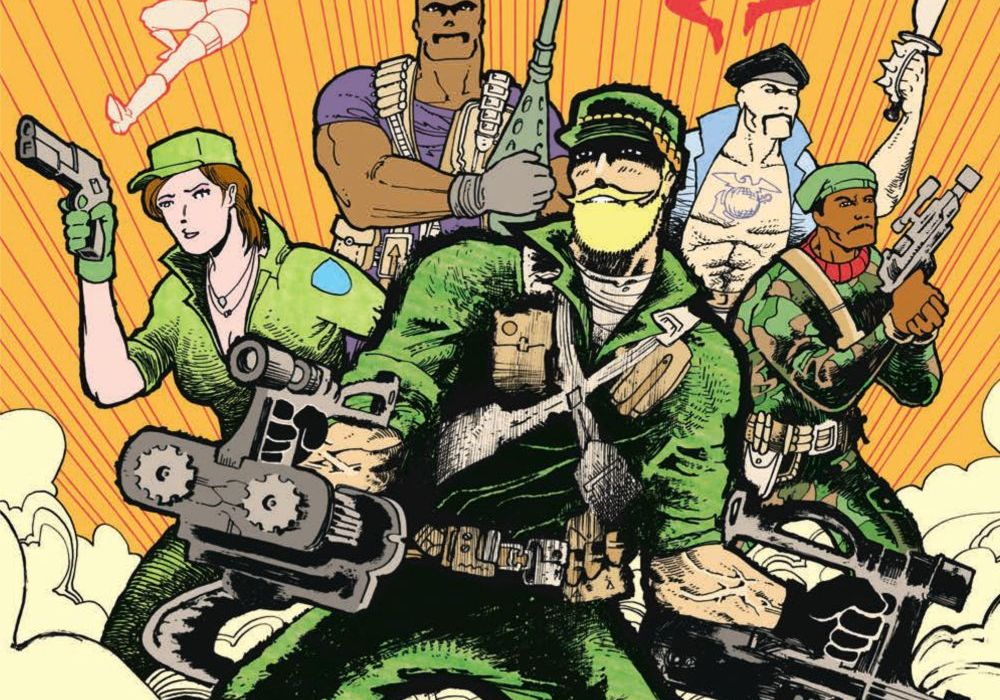 Self-publishing success story Michel Fiffe gets to take a crack at some real American heroes in IDW’s first issue of a three-issue limited series “G.I. Joe: Sierra Muerte.” Comic book nerds in the know have been whispering Fiffe’s name for a while now on the basis of his increasing list of credits but mostly on the virtue of his well-received Suicide Squad-inspired series “COPRA.” So a jump to handling pre-existing licensed characters seems natural, even inevitable, but does Fiffe stick the landing? 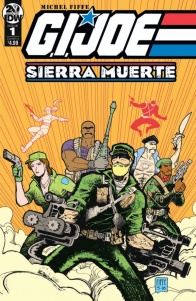 From the mind of comic book auteur Michel Fiffe comes a brilliant, contemporary and loving homage to all things G.I. Joe! Eccentric soldiers dominating bizarre terrorists are showcased in this bombastic account of G.I. Joe’s quintessential mission against Cobra! Through a beachside ambush, a compromised manhunt, and a revenge plan that backfires, America’s fighting elite risk life, love, and honor in this brutal globe-spanning adventure. From the creative mind that brought you COPRA! Visionary creator Michel Fiffe unleashes his imagination on the thrilling, amazing, and wonderful world of G.I. Joe! Each extra-length issue features an in-depth exploration of Larry Hama’s G.I. Joe: A Real American Hero comic book series, including an interview with Larry Hama himself! All conducted by former Youngblood and current Sleepwalker scribe, Chad Bowers!

For many comic readers of a certain age, G.I. Joe was a gateway to the medium as well the Mount Everest of ’80s synergy between comics, toys, and television. Transformers would be the Mount Kilimanjaro. (I know there are a few in between. Don’t @ me, topographers.) Before IDW’s curatorship of the property, Marvel’s “G.I. Joe: A Real American Hero” ran for 155 issues from 1982 until it was canceled in 1994 due to lagging sales. It was impressive run for a licensed book, and not coincidentally, the line of toys was canceled the same year. Born in 1979, Fiffe would have been at the epicenter of G.I. Joe-mania during his formative years, and that ’80s and early-’90s influence clearly extends to the pages of his over-the-top “G.I. Joe: Sierra Muerte.”

At first blush (and for the uninitiated) the self-taught Fiffe’s artwork might look amateurish, but it is deceptively sophisticated, drawing on some innate knack for graphic design as well as a refreshingly unorthodox approach to sequential storytelling. Fans of Tom Scioli (another creator who’s had his hands on the wheel of a G.I. Joe MOBAT) will feel right at home here. Fiffe eschews intricate, highly-detailed linework in favor of big, bold shapes created using a myriad of techniques and line weights. The minimalistic colors (by modern comic standards) are flat and laid down in large patches and help focus reader’s attention. Backgrounds are oftentimes mere suggestions. It’s all in service to the movement in every panel that Fiffe’s script demands. This is one chaotic story with skirmishes breaking out on multiple fronts all the while reintroducing classic G.I. Joe and Cobra members at breakneck speed, and often in the form of isolations, heroically posed and extended across Fiffe’s panel borders and bounded by thick black lines (suitable for cutting out?). The issue really moves at a blistering pace, and speed lines and puffs of dust and dirt abound as if Fiffe is urging readers to turn the pages even faster. For all the storytelling space between the panels, it was easy to imagine the action in these panels as being in motion. If a Joe story were animated in this style, filmmakers could turn to this for initial storyboards and character models, but this is the kind of experimental aesthetic that makes people nervous outside of comic book pages. Hell, it even makes people nervous inside comic book covers. IDW should be applauded for championing such an auteur-driven piece. We need more of this in comics.

Insofar as it really matters, the issue begins with Duke, Flint, Lady Jaye, Doc and Storm Shadow launching a surprise attack just as Cobra Commander is on the precipice of replenishing his armaments courtesy of Dr. Venom’s abandoned stronghold in Sierra Muerte in order to resume his campaign for global domination. The sneak attack is right out of Cobra’s playbook, and the terrorist organization is caught with its proverbial pants down and, in a nod to Warren Ellis’s underwatched and under appreciated G.I. Joe: Resolute movie, a classically duplicitous mercenary begins the story by nearly biting the dust. In a nearby swamp, Roadblock, Gung-Ho, and Rock ‘n Roll attempt to root out Zartan’s Dreadnoks from their secret lair. And if that wasn’t enough, in a Starbuckless downtown Sierra Muerte, Stalker, Scarlett, and our old pal Snake Eyes attempt to extract a man named Oscar who holds valuable information, but they are blindsided by more of Cobra’s old associates. The issues quietest moment actually carries the most wallop as Cobra Commander is given information by Dr. Mindbender that accelerates the storytelling pace even more in addition to leading to the capture of a fan-favorite character.

At this point, who are we kidding? If people are reading this book, most of these characters are fan favorites. For G.I. Joe’s immense cast, there is no dead weight, and Fiffe clearly has an affinity for all of them, so much so that he likely tries to cram too many and too much into this first issue, but fans of the property will reach the end of this chapter before crying uncle. If there’s a real criticism to be levied here (and consequently it was the same criticism that could have been levied at Scioli’s “Transformers vs. G.I. Joe”) it’s that spectacle has been substituted for story. And by story I don’t mean plot. When Cobra is involved, there’s always a plot, but the issues of Marvel’s “G.I. Joe” from my childhood for which I still have a fondness, the ones that still stick in my memory, were the ones that gave these interchangeable super soldiers some pathos amid the hail of bullets. It’s possible that after this action-packed start that Fiffe may try to infuse his story with more heart, but with only two more issues to go, it’s likely that Fiffe will do something that relies on nostalgia to tug at our heartstrings, if it’s even in the cards at all.

As a fan of the classic G.I. Joe stories, this first issue certainly provided some nostalgic and guiltless pleasures, and the coupling with Fiffe’s indie comic handmade style made for a fresh experience for this classic IP. This first issue even doubles down on our fond memories of Joe lore with a nicely researched text piece on the geography of the world of G.I. Joe by Chad Bowers. It’s an entertaining read that recalls other fictional reference books and fits in nicely with the tradition of the cut-out cards that accompanied the Joe toys, information that was later reprinted in Marvel’s “G.I. Joe: Order of Battle.” In short, readers who have a fondness for G.I. Joe will find little not to like here, while those with little to no experience with the characters may be overwhelmed with the fast and furious introductions and lack of context. Maybe they can come back to this after they’ve read the first 155 issues or at least watched a few episodes of the old cartoon, because knowing is half the battle.

Final Verdict: 8.0 – The first issue of “G.I. Joe: Sierra Muerte” is mostly style over substance, but man, what style!