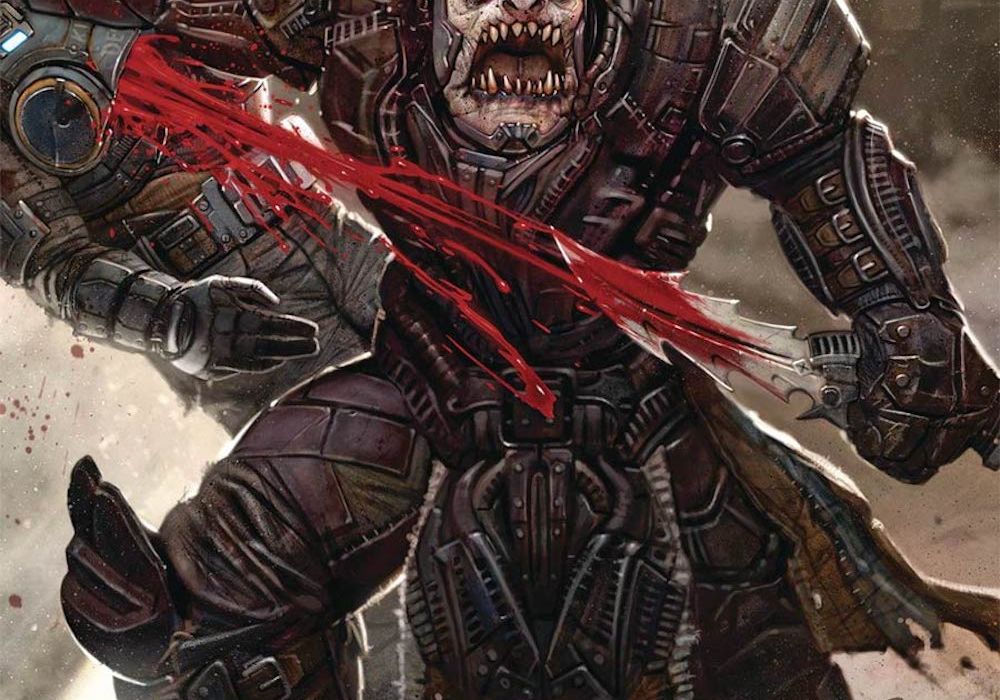 RAAM begins his descent into glory with a fun story that incorporates other major characters, yet doesn’t lock people out of the plot. 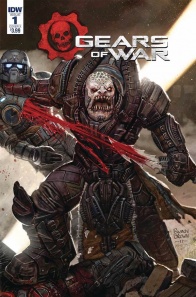 The most iconic villain of the Gears of War universe takes the spotlight! Years before he became the bane of humanity on Emergence Day, RAAM rose through the ranks to take leadership of the Locust Horde armies thanks to his intelligence, strength, and ruthlessness. Now, witness that swift and brutal ascent in… The Rise of RAAM!

As a video game tie-in comic, “Gears of War: The Rise of RAAM” has a lot to live up to. Fortunately, it seems that the creative team put in charge of this project know what they are doing, both for newcomers and returning fans.

Kurtis Wiebe does a good job of setting a backdrop for this origin story by settling on established tropes of fiction. Even though the beats aren’t exactly original, that kind of storytelling is exactly what this plot needs. Rather than delve into the deeper implications of the Lambent pandemic (puns on the nature of the Hollow not intended), Wiebe lets the hordes of Lambent Locust be relegated to the all-too-common zombie apocalypse threat, enabling new readers to grasp the basic concept while refraining from alienating longtime fans of the Gears of War franchise by giving more information in the back matter’s glossary section. Similarly, the interactions between RAAM, Skorge, and Uzil (High General) Sraak help to give the audience a common standpoint on the conflict within the ranks, that of the subordinate protagonist who thinks he knows a lot more than his superiors (regardless of whether or not he does). Rather than needing to give Sraak a fleshed out characterization of his own, Wiebe therefore is able to use a common archetype, even a cliché, to settle things over a new character.

That said, not everything is kept to the old, known character beats of various genres. By casting those known elements, Wiebe is able to grant additional insight to the then-coming war, only granting a very brief look of the human versus human Pendulum Wars on the surface for sake of explaining the timeline. Commonalities seem to be the theme of the day in the Locust Horde’s armed forces. Since the comic is written through the perspective (and language) of the Locust, RAAM and his Bloodied Vanguard unit of Drones are given room to speak for themselves, and seem to have a similar manner of speaking, pseudo-camaraderie, and hatred of authority to Delta-One, the main protagonists of the games. The apparent friendship between Kantus monk Skorge and Vold RAAM is shockingly similar to the fire-forged friendship between the Gears of the Coalition of Ordered Governments, down to some comedic moments and remarks, not to mention time to laugh amongst themselves as friends. While their rhetoric is decidedly anti-human, Wiebe seems to be ready to flesh out the two apparent protagonists of this miniseries as dark, villainous takes on the heroes fans know, but at their core not too different, Skorge’s preaching and proclivity to invoking the Trinity of Worms pantheon notwithstanding.

Max Dunbar’s artistry is well suited to the Gears of War franchise. His thick lines around individuals helps to distinguish them from their surroundings, with the use of light and shadow giving a very foreboding atmosphere, not unlike the franchise’s other trips to the Hollow and in particular the Inner Hollow. His use of shading is very well done, adding to the dark setting and bringing focus on the few bright lights in the Inner Hollow and the Hollow in general. Additionally, the shading serves a secondary purpose of adding an air of menace to the Locust, making sure to show that they are in fact the villains, regardless of whether or not they are at each other’s throats.

Dunbar’s facial artwork is top notch, particularly when it comes to the central characters. RAAM and Skorge’s faces are appropriately hideous due to their extreme detail, whereas Queen Myrrah’s far more humanoid look is borderline uncanny in how familiar it is by contrast. There admittedly is not a lot of difference between the different Drones, from Sraak to RAAM, but the general appearances are enough to determine different types of Locust units, with other elements of their physiology, especially height, making up for any problems with the faces. For example, Sraak is absolutely gigantic, being at least several heads taller than RAAM and twice the size of his queen. Such non-facial differences seem to be the primary way of distinguishing one Drone from another, allowing Dunbar to take a different approach to distinguishing between different people.

Jose Luis Rio’s coloring is very well handled. On the one hand, the color palette fits perfectly with the franchise, using dark tones with orange light of fire for the Hollow, along with the appropriate colors of the various armors and species in the Locust Horde and their Lambent counterparts. On the other, it is the way in which these colors mesh with the deep shadows drawn by Dunbar that make the various characters into frightening entities. The bright, sickening colors of the Lambent clash with the vibrant red of Skorge’s armor and the brown-maroon of the many others of the Bloodied Vanguard, and every member of the Locust society has his own color scheme in accordance with his role, from the Kantus like Skorge to the Drones like RAAM to even the queen herself. The most striking is the fair skin tone of Queen Myrrah herself to contrast with the grays of the rest of the Locust Horde. While it was also seen in the games, her skin color seems to have a bit more in the way of tanning, making her seem more human, and thus an even more deliberate contrast with the mountain of a Locust that is Sraak.

It may be a video game tie-in, but “Gears of War: The Rise of RAAM” #1 seems to be rather inviting for newcomers and returning fans alike.

Final Verdict: 8.0– An accessible story that still invites new ideas to the franchise, “Gears of War: The Rise of RAAM” #1 is a promising new addition to the world of Sera.