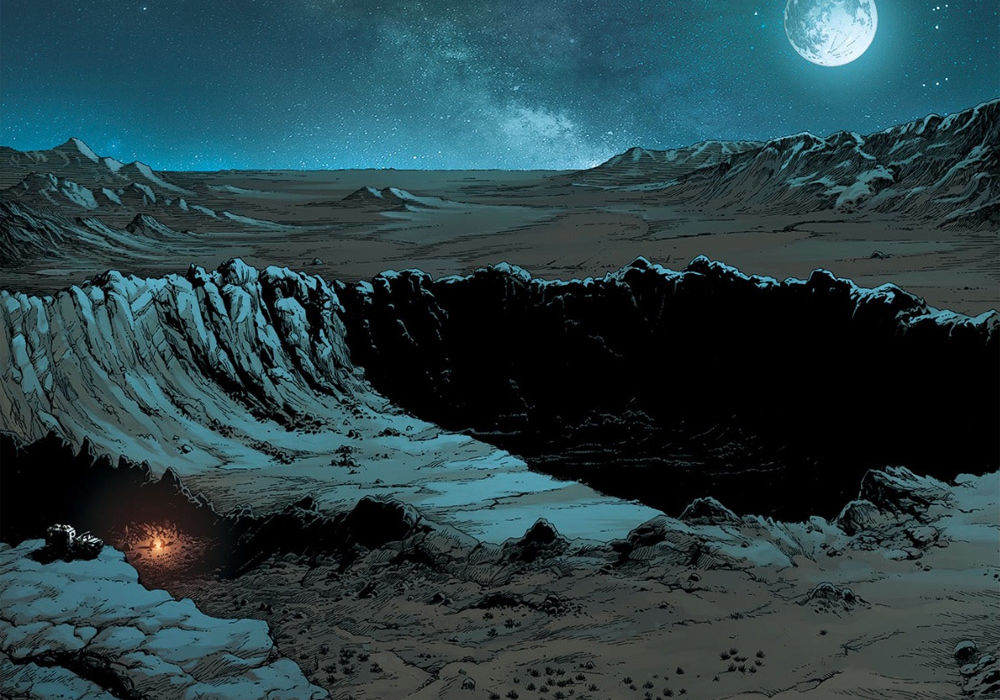 We’re really impressed with “Geiger” #1, which combines the best of Mad Max, The Road, and I Am Legend to deliver a stand out superhero story. “Geiger” #1 manages to sustain a world which mixes over the top, campy, high velocity elements with austere character drama. Always brutal but not always nihilistic in how it depicts the apocalypse, “Geiger” could go in a lot of directions. But given how strong the first entry is, we have an inkling that wherever Geoff Johns and Gary Frank Take us, we’ll follow. Lets dive into this bunker and close the hatch behind us. Warning, some spoilers ahead. 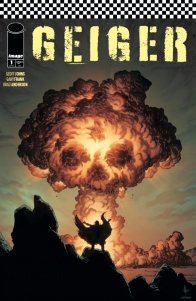 The critically acclaimed team of writer GEOFF JOHNS and artist GARY FRANK unites with superstar colorist BRAD ANDERSON to bring their first creator-owned hero to Image Comics! Set in the years after a nuclear war ravaged the planet, desperate outlaws battle for survival in a world of radioactive chaos. Out past the poisoned wasteland lives a man even the Nightcrawlers and Organ People fear. Some name him Joe Glow, others call him the Meltdown Man. But his name…is Geiger.

“Geiger” #1 opens with a story within a story: a group of wasteland mercenary bivouac by a massive crater, and one asks for a story about the man who wanders the desert, skin bare against the irradiated world. The eldest wanderer then remarks on the titular Geiger, saying everything he did, he did for family. Boom, then comes the flashback to the day the world ended, where Tiraq Geiger meets his destiny. To start, the story within a story frame adds a level of coziness to the narrative, which juxtaposes nicely with the stark landscape depicted at the start of “Gieger” #1. From this beginning, we get the sense that this is a world steeped in lore, rumor, and the kind of disjointed language and storytelling that would be the natural fallout of a civilization post sudden nuclear calamity.

The flashback sequence itself is also a thing of majesty. To summarize, we get a brief blip of news reels, teasing that there’s more to the story than meets the eye. This isn’t just nuclear war; there are mysterious obelisks involved, mass confusion, unknown enemies. This is true fog of war stuff, and it’s terrifying. Just as the last news clip passes, an alert blares and we see Tariq run his family to their bunker, only to be waylaid by gun-toting neighbors who want the shelter for their own. Tariq, shot in the leg, falls as his family runs to safety. Ready to sacrifice himself for his family, everything fades to silver white as a mushroom cloud explodes across the page, filling “Geiger” #1 with a blinding haze of silver, white, gray, and black. Whew. Apologies for the exposition and summary, but one point we want to get across is that us telling you the general plot doesn’t ruin “Geiger” #1, because the shock and awe of the opening and subsequent story isn’t what makes the story sing. Instead, it’s how it’s so expertly written, how finely detailed it all is. It’s in the little snippets of detail we get between action sequences, it’s in the subtexts of Tariq’s relationship with his neighbors, and with his family. It’s in the commentary on doomsday prepping, and so much more. Basically, “Gieger” #1 is one of those stories where we could explain it in a million different ways, and no way would be better than reading it yourself. Really, pick this book up.

Later on in the story it’s revealed that Tariq Geiger, who somehow not only survived the nuclear blast but was empowered by it, has made camp exactly where that flashback sequence occurred. He hasn’t inched from outside his family’s bunker, unable–or refusing–to enter it until the world is safe for them. They can’t hear or see him, and he can’t hear or see them. There is no other way to put it: this set-up is deliciously tragic, and we’re immediately rooting for Tariq and his family. “Geiger” #1 excels on the character front, and we’re totally enthralled.

Gary Frank really excels in “Geiger” #1, adding beautiful pictures that rival the power of the writing. Geiger’s entrance as a radiation infused, dark cloaked badass hero straight up rocks. The costume, which looks like something out of a Batman and Assassin’s Creed crossover (in the best way possible) fits together nicely, and the action sequences are clear. Outside the field of battle, Frank depicts Geiger in more quiet moments, for example when he contemplates a dinner of canned beans with his mutant, two headed wolf-dog companions. It sounds over the top, and it is, but Frank makes it all so poignant. There’s an entire page in “Geiger” #1 full of ten panels, none of which include dialogue or any words at all. Frank, through illustration alone, paints a story full of emotion and nuance. Nobody says anything, but we understand every word. Wow.

Frank’s vision expands at the close of “Geiger” #1 as we’re teased with outlines of Las Vegas, which somehow survived and thrived the apocalypse, becoming a neon den of thieves and opulence. Moments like this flow seamlessly from the starker, wasteland bound scenes earlier in “Geiger” #1. What we’re seeing in “Geiger” #1 is a near perfect synthesis of writing and art, pure and simple.

Finally, it’s worth mentioning Brad Anderson here, who really brings the magic. Colorists are often the unsung heroes of comics, and quite literally set the tone of stories. Anderson does a good job making the colors pop in “Geiger” #1, opting for a bright blues and picturesque desert sunrise pinks and tans for the landscape. The horrors of the wasteland are never lost on us given the narrative of the story, and instead Anderson’s color choices give the story a brightness that lends itself to visual clarity. Wastelands can be monotonous, but not in “Geiger” #1 — and Anderson is to thank for that. Additionally, his ability to capture brightness, be it the unsightly glow of Geiger’s radiation or the the neon glare of new Las Vegas, is unparalleled.

In sum, “Geiger” #1 is an excellent entry into both the post-apocalyptic and super hero genres. The writing is tight, the story unique, and the art top notch. Throw this on your pull list and thank us later.

Final Verdict: 9.5.From character to plot to setting, everything in “Geiger” clicks into place, making for a superb story that just radiates excellence.