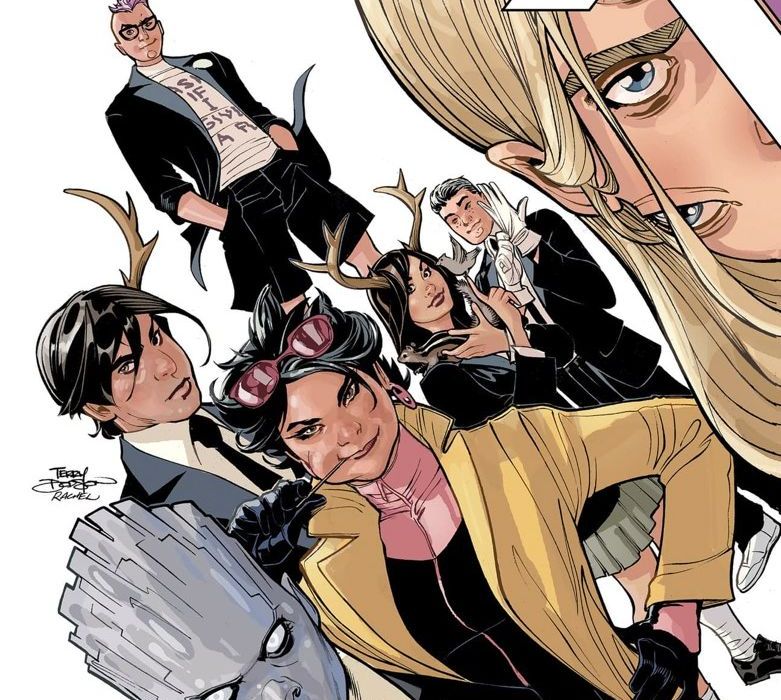 Marvel’s original “Generation X” series set a lofty legacy as one of the 90’s best niche books. It had great stories, incredible early Chris Bachalo art, and believable, relatable characters – something sadly lacking from a lot of that era’s classics. Marvel’s taken the right track with the revamp, bringing aboard Christina Strain, a veteran colorist turned writer who’s worked on “Runaways”, one of Marvel’s biggest YA of the last decade. But can this new series exist out of the shadows of it’s predecessor? 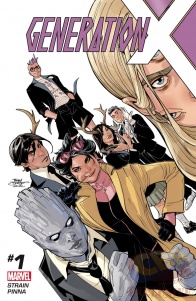 The Xavier Institute for Mutant Education and Outreach has opened its doors and is ready to foster the next generation of heroes and diplomats! But this time around, the X-Men recognize an unfortunate truth: not all mutants are created equal. Some mutants are not made to fight Sentinels or serve as ambassadors on behalf of their kind. Some mutants will just be lucky to survive another day in a world that hates and fears them. And who better to mentor mutantkind’s lovable losers than perpetual sidekick Jubilee? But will Jubilee and GENERATION X survive the experience??

Strain has a great grasp of who her characters are and how they interact with each other here. I love that Jubilee is still sticking with a lot of her character development over the years, having become a vampire and adopted a baby, it creates a lot of consistency within the Marvel canon and makes her as a character more interesting. This is also evident in having Kitty Pride as the principle of the Jean Grey school, although she takes more of a backseat in this series. However, Strain’s own creation, Nathaniel Carver, is a great addition to this series. Carver, for the most part, acts as a view point for the readers to experience the weirdness and wonders of the X-Men’s school. He works as a great newbie character, especially as he stares in wonder while characters like Glob Herman walk past.

However, I think Strain’s decision in having him walk out on the school in the first issue didn’t work well for this character. Carver has a something of a cocky attitude, which is most telling when speculates that Benjamin Deeds, a shapeshifting mutant, must abuse his power on ‘touching up photos for dating apps’. Having him on top of this quit the school because he can’t deal with the environment makes him somewhat unlikeable as well, which in a book like this makes for unpleasant reading. Thankfully, the chaotic environment of the Jean Grey school is well portrayed here. It’s great to see the diverse mutant class brawling and bickering throughout the issue, making the whole setting bustling and suitably lived in.

The way this issue is structured, Strain presents the school almost like a Zoo, where Carver is constantly running into and witnessing exotic events play out. We have him interact with the fickle and invasive Phoebe Cuckoo, a voyeuristic moment as Strain writes her constantly picking at Carver telepathically. The climax of this issue blasts onto the page as Carver watches Bling and Quentin Quire, two terrific X-Men characters, have it out over a pair of Quire’s brogues. The scale and banter is up there with a cosmic level fight, making it tons of fun to read. It’s also worth noting the way Strain uses telling details like Quire’s brogues and Jubilee’s baby bottle filled with blood to give newer readers a feel for this huge cast without overloading with exposition.

Artist Amilcar Pinna is another small-time creator, but works hard to prove his worth in this issue. The most immediate thing I noticed is that, tying in with Strain’s writing, there is always something going on in every panel. Pinna creates an environment that feels busy and interesting from scene to scene, whether it’s Central Park, the Jean Grey school, or it’s courtyard. A great example of this is as Carver’s walking through the school halls, Pinna draws a menagerie of incredible mutants like Genesis and Rockslide into the background. It’s worth noting though that he’s knows when to reign the detailing in, keeping the reader from taking in too many sights at once. The Kitty Pride/Jubilee scene is quieter than the rest of the story, which brings the focus to the two characters, creating intimacy that doesn’t occur through the rest of the story.

Pinna can swing with the best of the brawlers too, delivering an explosive fight scene in the Quire/Bling tussle. As I said, Strain writes this with the feeling of two titans engaged in battle, so Pinna depicts the sequence with dynamic camera angling and dust and debris flying everywhere. Right from the start, Bling bursts into the frame at high speed, with bricks and debris flying out of the panel and seemingly off the page. It’s a technique that tends to be overused in modern comics, but Pinna manages to pull it off with an almost birds-eye-view angle.

In contrast, I love the visualisation of Carver’s psychometric powers. Every time he collides with someone, a half page panel bursts out of Carver’s head with sheer intensity, depicting scenes from the characters past colliding into each other in a mish mash of experiences. It works because we almost get a sense of how Carver it witnessing these psychometric episodes – suddenly, all at once, and without too much context. I do have to point out, however, that some of Pinna’s artwork is a little wonky in the facial areas. Some body parts are out of proportion, and that can be due to Pinna’s intense camera work too. For instance, the first page has an upward view of Jubilee’s face that seems a little unnecessary at first, and her eyes don’t appear to line up. It’s not a huge detail, but in spots like these it can break up the believability and immersion of the story.

Felipe Sobreiro does a good job on coloring over the whole issue. His work has a cel-shaded aesthetic to it, which complements Pinna’s semi realistic art work, balancing the real and the cartoon aspects of the art. However, there are some areas where Sobreiro will make skin look overly shiny and plastic looking, distinctly so in the Carver/Deeds conversation scene. However, Sobreiro’s overall palette works well using more muted colors in contrast with some of the more vibrant characters – we get more visual signs telling us this is a prestigious college, and not a NYC battleground.

“Generation X” delivers a solid start to the latest teen focused X-series. Strain writes believable teenage characters that all feel unique and interesting, falling in line with the characterisation standard of the original series. Pinna presents great art with a modern shine to it, and Sobreiro tops it all off with a mixed muted and vibrant palette. A few setbacks keep this from being an instant classic, but the seeds are here for a great team book to sprout in the future.