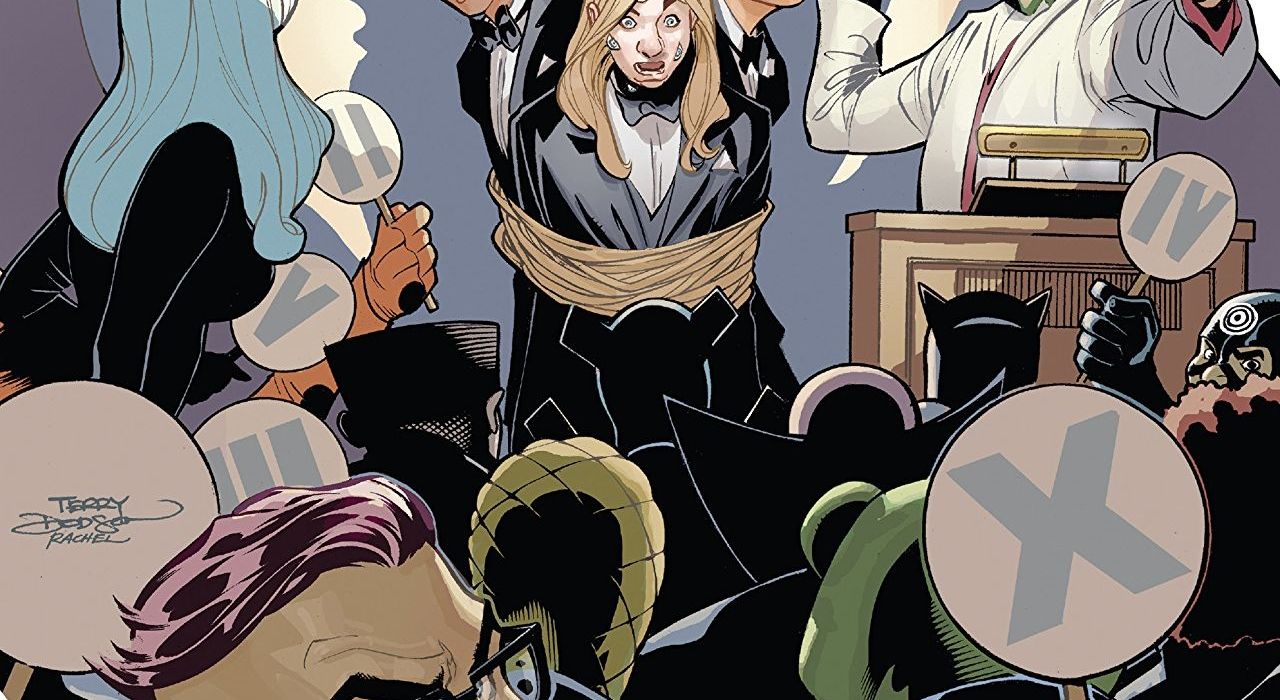 It took a little while to find its voice, but “Generation X” has become the book that X-Fans have been waiting for. Instead of creating a bunch of new mutants to use and forget about, “Generation X” puts the focus on the many, many young mutants the X-Men have collected over the years. By putting the focus on young mutants going to school together, “Generation X” channels the energy of “The New Mutants” and “Academy X” and turns marginalized characters into my new favorites. 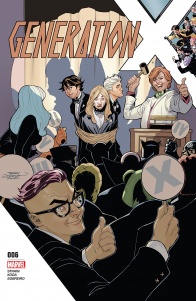 Cover by Terry & Rachel Dodson
Written by Christina Strain
Illustrated by Eric Koda
Colored by Felipe Sobreiro
Lettered by VC’s Clayton Cowles
With a mutant-killing monster loose beneath New York City, the X-Men impose a curfew for the students of the Xavier Institute. But QUENTIN QUIRE’s never much been one to follow rules…
When Quentin convinces his classmates to join him for a night out, they’re in for something a LOT more fearsome than a mutant-killing monster…
They might just find themselves at an auction populated by some of the Marvel Universe’s deadliest villains!

Issue 6 puts the focus on perpetual problem child Quentin Quire, as he takes his roommate, Benjamin Deeds (a.k.a Morph) out night after night. All the karaoke parties are leaving Benjamin exhausted, and their classmate Nathaniel Carver (a.k.a. Hindsight) is worried. The three of them try to work it out, and end up in formal wear at an evil auction, facing off with Hellfire Club brat Kade Killgore.

Even though “Generation X” has a strictly defined team, the book’s willingness to use a larger supporting cast, and yes, the tangled X-continuity, is a huge asset. Quentin’s bad behavior here is implied to be fallout from his failed relationship with Idie Okonkwo (a.k.a. Oya). Idie was introduced as a timid and religious girl in the pages of “Generation Hope,” then she and Quentin found romantic chemistry in “Wolverine and the X-Men,” until Idie finally came into her own in a volume of “All-New X-Men.” If this is your first encounter with the character, it’s clear that Quentin is into her, but she’s the coolest girl in school. If you’ve been following the (relatively minor) character for years, her gradual growth adds tremendous weight to the book. That’s doing continuity right.

This also applies the the B-plot. which focuses on the class adviser Jubilee. Most people probably know Jubilee as a mall babe who loves chili fries in the 1992 cartoon; this character feels ten years older. She’s still an upbeat, yellow-trench-coat-wearing punk, but she’s also a vampire and a single mom. Instead of shying away from those things or resisting them, Christina Strain let’s Jubilee’s experiences give her multiple facets. Jubilee feels like a superhero who’s lived in the dangerous universe of powered conflicts for most of her life. Instead of needing to be reset, she carries her experiences with her, and feels like a more complete character than she has in years.

The school setting was always something that made “X-Men” feel unique, and the absence of kids going to school has been felt in most recent X-comics. Tell me you don’t want to see green potato monster Doop teaching a sex ed class, I dare you! Where most of the line is taking a back to basics approach, “Generation X” is embracing the breadth and depth of comics’s greatest superhero soap opera.

The artwork does a good job at capturing the diverse cast of characters, both in the sense that it needs to convince you that teenagers can grow antlers, and in the sense that the X-Men are a multinational group of superheroes. Jubilee has been white-washed by a slew of artists, but here her Chinese American heritage is readily apparent. The clean character work is achieved through big, close-up panels, which makes the book move along quickly, but conveys a lot of information.

This is most apparent in the crowd scenes. When Quentin and the gang get to the auction, it is full of detail. Instead of giving us a ballroom of shadowy faces, Eric Koda gives us an assemblage of villains that includes Extermanatrix, Hammerhead, Typhoid Mary, and a dozen too obscure for me to I.D. The foreground of the auction scenes are filled with mostly static talking heads, but in the background villains are throwing down and playing out their own miniature narratives. It’s a great use of panel space, and an advanced artistic choice that helps avoid the pitfalls of past superhero books.

Koda also does a great job at conveying motion, which is extra important in an X-Men book. Characters walk with different posture and body language, sometimes even from scene to scene. Quentin looks cowed around Idie (even though he’s still sporting a slimy smirk) but puffs his chest up with confidence in a room full of good guys. Doop floats around like a cartoon character, which he is. The coolest though is Jubilee, who moves like a True Blood vampire, too fast for the eye to follow. One panel of her conveys this with one image and some motion blur, and the image has been stuck in my head since I finished the issue.

“Generation X” #6 isn’t redefining superhero storytelling, it’s restoring it. By merging old story ideas with new comic structures, it feels uniquely modern, which is important in a book filled with so many forgotten characters and plot threads. Many writers have struggled with the “X-Men” in recent years, they should look to “Generation X” as an example of what can be done with Marvel’s merry mutants.

Final Verdict: 8.4 – It turns out mutant teenagers with powers and problems is a winning formula for a comic book.