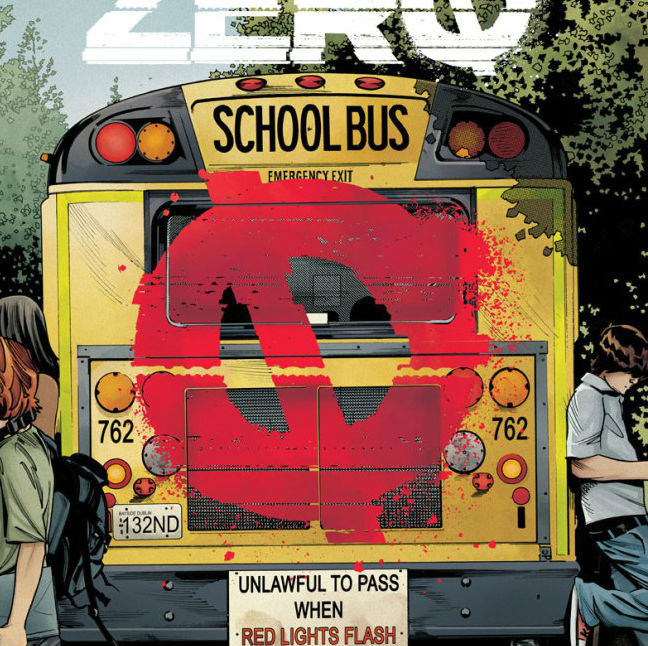 The kids are not alright. After their introduction in “Harbinger Wars” and with the occasional focus over the last few years, the group of psiot child soldiers are finally breaking out into their own ongoing, helping kids who have nowhere else to look. So how does their introduction go? Let’s take a look! 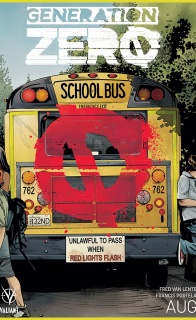 Because you demanded it! Exploding out of the pages of HARBINGER WARS comes AN ALL-NEW ONGOING SERIES starring GENERATION ZERO from New York Times best-selling writer Fred Van Lente (IVAR, TIMEWALKER) and blockbuster artist Francis Portela (FAITH)! If you have a problem… If your parents won’t help? And if your cause is worthy? Log onto network #ZERO?because Generation Zero is listening. Years ago, the children of the experimental strike team known as Generation Zero were taken from their families by Project Rising Spirit, a private weapons contractor, and raised to be psychic soldiers. After years of taking orders, they have fought for and won their freedom. Now, the world’s most wanted teenagers have pledged to protect each other tooth and claw, while using their extraordinary abilities to right wrongs for a generation without a future? To fight for kids, just like them. One of those kids is Keisha Sherman, whose boyfriend just turned up dead after a suspicious car crash in Rook, Michigan – a newly booming tech town that sprang from rags to super-riches seemingly overnight. When Keisha makes a desperate plea into her webcam, the local high school suddenly finds itself with several unusual new students? But as word of Generation Zero’s presence spreads rapidly through the halls, this volatile band of teenage upstarts is about to discover that they’re far from the most extraordinary thing lurking behind Rook’s stainless-steel facade…

Well, it’s finally here. A book I have been waiting for the last two-and-a-half years for. Generation Zero, superpowered kids once under the thumb of Project Rising Spirit, are out on their own and trying to help people in their own special way. But when you have been raised to be weapons, you’re not exactly as optimistic as this books psiot-counterbalance book “Faith”. This is a book that is a bit more cynical in its nature, with this technologically advanced town of Rook, Michigan hiding some real darkness. But the question is, can Van Lente and Portela sell this premise in one issue?

The interesting thing about this book is that it does kind of run parallel, structurally, to the first issue of Van Lente’s previous Valiant book: “Ivar, Timewalker”. In that, this issue does have the titular characters in it, but so minimal with a more focus on their presence, their nature, their mystique. The tidbits we get are meant to entice us. Instead, the beginning focuses on building the world that these characters will inhabit, shown through the lense of a new, “normal” character. In the case of “Timewalker” it was Dr. Neela Sethi and in this case it’s high school student Keisha Sherman. We learn about her and why she’s contacting Generation Zero. Her town of Rook was once a sleepy town in the middle of nowhere, but almost overnight it was transformed into a technological hub, financial stability and a lot of weirdness. But it’s when her boyfriend Stephen, someone who believes he stumbled onto a major secret about Rook’s prosperity, dies in a car accident, she feels desperate enough to get help.

I’ll say this, comparing this to “Timewalker” again, I have to say that while Van Lente does a real good job of setting up Rook itself, there’s still a little bit more to go for Keisha herself. I’m not saying what we get here is bad or that I’m not willing to follow her, but she still has some more fleshing out to do (Neela being immediately unwilling to take the Timewalker’s shit did a lot to endear her). I get it. Young adults, they still are forming identity and it may be a bit more expectant for Keisha to be more enchanted by these mysterious new kids to the town. We do get some tidbits on her father, Rook’s Sheriff, and her little brother Kwame, who is on the autistic spectrum and who may know more about some of the weirdness in Rook than Keisha does.

Speaking of weird, let’s talk about when Generation Zero shows up (in this case, just Cronus, Telic and Animalia). Since it’s still from Keisha’s perspective, we don’t get a look in their heads, but we do get that underlying sense of weirdness, just from little quirks in dialogue (or in Animalia’s case, being blunt as hell) and little winks for fans that have been following these kids prior. But it’s not until Keisha is attacked by the villains of this arc, creatures known as the Cornermen does the veneer of Rook’s wholesomeness begin to get peeled away. It really does show that this book is kind of the psiot counter-balance to “Faith”. Faith’s a bright, optimistic superhero book. This is a cynical horror book. And all the better for it.

This is where Francis Portela and Andrew Dalhouse get to shine. There is a criticism that I really should talk about Portela’s work that I’ve never had a chance to: nearly every character has an incredibly pronounced chin. I know this seems like such a nitpick, but they can be so big that they’re distracting when looking at someone from a side profile and when you’re looking at them directly, it seems like their faces are a bit squished at times. That said, Portela does get to play with a plethora of character designs, considering how cliquey high school is, and Dalhouse provides a very intimate color tones for just before the weird happens.

It’s when the fights begin and the story allows itself to get into the spooky things, the art truly sings. The Cornermen combine eldritch with the dapper in their appearances and their movements and it gets more psychadelic when the psiot children get into the thick of it. They’re brief snippets, again a taste of what they can do. I got to say, Animalia’s cartoon animal here is probably the most blended I’ve seen with the rest of the artwork, not as contrasting as I’ve seen previously. Still a great looking bird, just not sure how I feel about that one aspect.

But it’s that last page that really sold it, where Portela and Dalhouse are in full synch. Maybe it’s just because I’m such a fan of the “Glowing Eyes Take Warning” trope, but it’s such a great scene, radiating the power, horror and even a bit of awe that goes with this group. I would very much like a print of that last page.

There are sometimes where I feel like I’m talking to a brick wall when I talk about Valiant that only got really justified when “Faith” became a big thing. But I’m saying: If you are a fan of “Runaways”, if you are a fan of Life is Strange, if you’re a fan of Stranger Things (which I’ve been mainlining this week) then get on this book because this is cut from that same growing-up/supernatural horror blended cloth. Everything you need to understand this is provided for you here. Give it a chance.