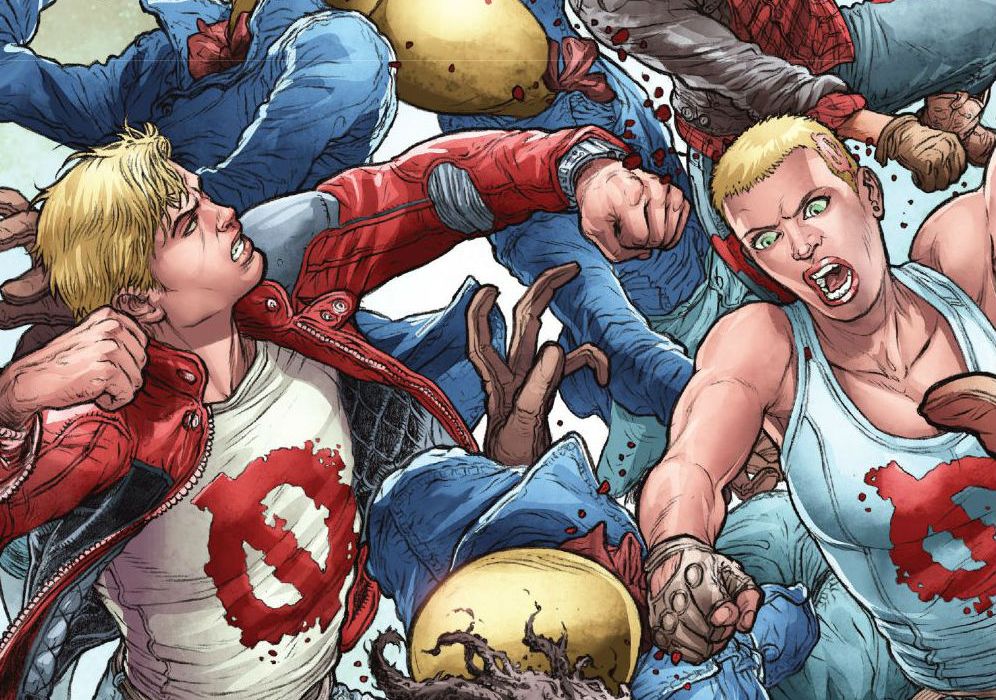 The secrets of Rook are beginning to pour out as the Generation Zero begin a mission to go deeper than they ever anticipated. How does it go? Let’s find out. 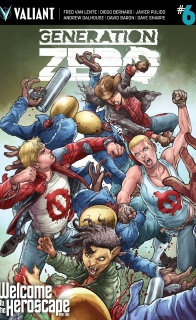 ALL NEW ARC! ALL-NEW JUMPING-ON POINT! Fight your way through the “HEROSCAPE”! Generation Zero managed to survive their first mission, and now duty has called on them to venture deep inside a perilous dimension only known as the Heroscape to see the world through a new set of eyes! They’ll discover their friends’ biggest secrets, their enemies’ darkest fears, and their town’s sinister connection to this imagination-fueled reality. But just because the Heroscape is imaginary, doesn’t mean it can’t kill you? And, from anime-inflected zombie hordes to psychedelic sci-fi warriors, all of Rook, Michigan’s most deeply buried fantasies are about to come roaring out of your daydreams! Dream big because New York Times best-selling writer Fred Van Lente (IVAR, TIMEWALKER) and acclaimed artists Javier Pulido (Daredevil) and Diego Bernard (X-O MANOWAR) are gearing up for a brand-new jumping-on point that’s going to send Valiant’s temperamental teenage time-bombs blasting out of the suburbs and into their most grisly adventure yet!

With the revelations of the previous issue, the remaining members of Generation Zero regroup as the forces that are behind the weird ongoings in Rook also make their own moves to contain the situation. We are introduced to Rook’s leader, Jason Poole, and see how he is connected to Keisha’s father, Sheriff Thomas. We also see the kids at their most vulnerable, in particular James being separated from his psionically-linked sister.

Valiant does a good job of providing jumping-on points for new arcs in the series, but I have to be honest, this doesn’t really feel like one. It wants to, but it does throw so much at the reader, so much information about Rook, about the kids, e.t.c. but a lot of it is nothing without the context of the previous five issues. Sure, we are told about James’ sister, but we don’t see her here. Sure, we are told that Keisha gets the idea to put sheets on the corners of the room from her kidnapped brother, Kwame, but the last several issues was setting that all up. So, in honesty, I would not start here. This is a book that is so dependent on building on itself (not that I’m complaining about that) the notion of “Jumping-On Point!!” feels very quaint.

With that out of the way, this was a real good issue. I think -over the last six issues- I really need to come to appreciate the small moments of this book. The overlying plot, a town with a dark secret, is well-treaded ground. Whether it’s the subtle back-and-forth between Poole and Sheriff Thomas, or to the more emotional with Cronus’ dry, yet also bitter and sad reaction after realizing they could use the unconscious Animalia’s mind to enter the Heroscape or even Cronus trying to comfort the distraught James, even with all that military programing making it difficult.

One particular page of note is just before Keisha, Cronus, James and Telic enter Animalia’s mind where they give out their motivations. Whether it’s Cronus’ desire to protect these soldiers under his command, Keisha’s desire to rescue her family member, James’ desire for self-preservation by saving his sister or Telic’s desire to stomp fascists into the dirt. Now, there is a certain subsection of the fandom that are annoyed because they believe that this series “kiddy-fied” a dark concept such as Generation Zero, especially when compared to Josh Dysart’s writing of the group. I have to disagree, and here’s why. Sure, there are light-hearted moments in this book, but it’s in the face of some very dark and dangerous things. And as someone who is incredibly terrified of what the next few years are going to bring, I can’t help but relate to the motivations these four have and their absolute disdain for unfair and unjust authority. Is the scene a little on the cheesy side, what with Diego Bernard and colorist Andrew Dalhouse have them put their hands into the middle? Sure, but you need heartfelt lividity to combat the dark.

Speaking of Bernard and Dalhouse, let’s talk artwork. Last time I saw Bernard’s work, it was when he was working on “X-O Manowar” with Robert Venditti and I have to say, his artwork has improved a good deal. His linework looks a lot smoother here and is able to bring on some creepy expressions, especially from Gamete, the Super Fetus (I am compelled to bold that because it’s such a crazy concept), but also shows a good capability for subtlety. I spoke before of Cronus’ sadness at having to use Animalia’s unconscious mind above, and a good portion of conveying that is due to Bernard’s pencil work of being able to convey that emotion, even when Cronus’ expression isn’t the focal point of that panel.

Yes, Javier Pulido does a couple pages at the end of this issue (which: feel like a got a bit manipulated since the majority of his pages were the preview of this issue and are the very end of the issue) paired with colorist David Baron. They take on the duty of depicting Animalia’s “Heroscape”, one’s inner world where they are the hero of their own story. It’s a brief segment, heavily inspired by manga (in particular Giant Robot manga with a splash of “Attack on Titan” in there). It provides a fun and energetic look into her mind (also, some nice callbacks to the Perfect Day arc from “Harbinger”) that I only wish was longer and not spoiled by previews.

“Generation Zero #6” is a poor jumping-on point but I’m kind of okay with that. As someone who does appreciate longform style stories, I am more and more enjoying this book as it shakes off the first arc’s clunkiness and necessity to introduce new concepts. We are finally getting into the characters of this group and I’m hoping it only continues to get better.

Final Verdict: 7.9- The big plot of Rook may be a bit derivative, but this book lives and breathes in the character beats Van Lente, Bernard and Pulido provide.