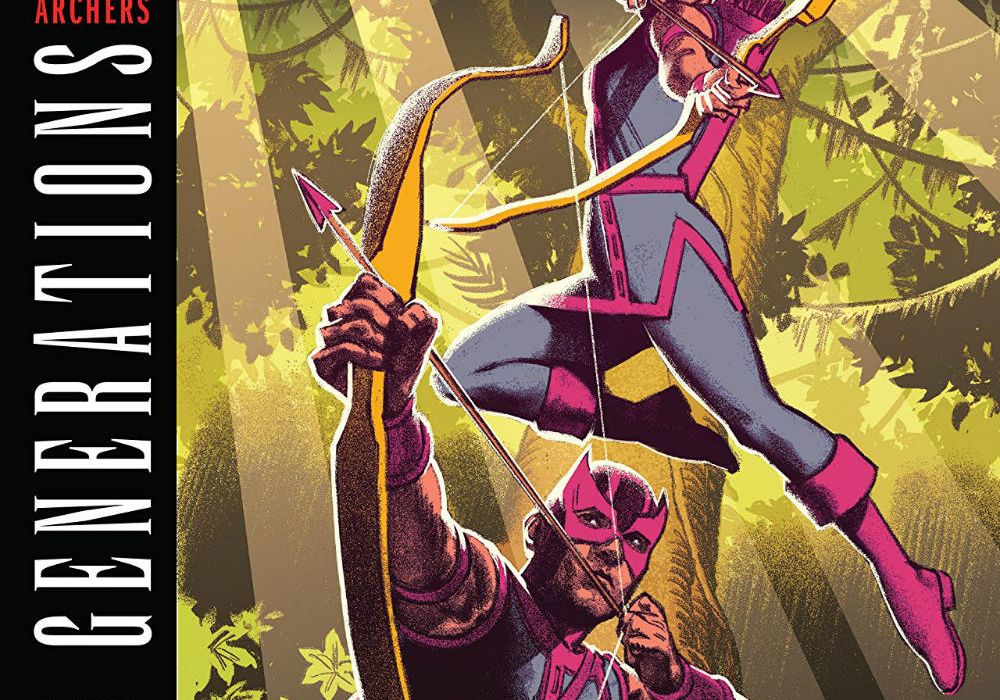 If you had to ask me who the best Hawkeye is, I don’t think I’d be able to answer. Both of them have some fantastic comic runs, have undergone great character development, and are generally enjoyable characters. Actually, scratch that: it’s not just that there’s no one best Hawkeye, but rather, the two are both at their best when they’re on a team. Now we get Kate Bishop meeting a younger Clint Barton, and all the fun that ensues.

Oh, and a little spoiler alert. 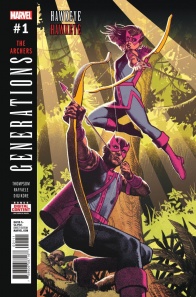 Kate Bishop, A.K.A. Hawkeye, finds herself smack-dab in the middle of a battle royal between the world’s most skilled sharpshooters – including an inexplicably young Clint Barton, A.K.A. the OTHER Hawkeye. The prize? Bragging rights for being named the best, of course – oh, and you get to stay alive! Unfortunately for Clint, several of his competitors are villains he’s taken down, making HIM a primary target. So, on top of figuring out where and WHEN she is, Kate’s got to find a way to win this little contest of skills and keep her not-so-old pal Clint out of the crosshairs… easy peasy.

The “Generations” comics have done a great job bringing together legacy heroes and their older counterparts, and have more or less all been enjoyable reads. Unlike many of the “Generations” heroes, though, Clint and Kate interact with each other fairly often. “Generations: Hawkeye & Hawkeye” averts this by having Kate meet with a younger version of Clint, back in his days of blue and pink (a classic outfit, and a personal favorite).

Thus, we get a somewhat different character dynamic. Kate’s meeting her mentor as a younger, more cocky but less experienced version of the man she knows. Kelly Thompson does a fine job at showing us readers the mix of emotions it brings, as well as Kate’s struggles to not reveal too much about the future.

Speaking of, I love how “Generations: Hawkeye & Hawkeye” has Kate handle her being in the past. She turns to movies to figure that changing the past is a bad idea, and accidentally introduces the word “asshat” a few years early. (Of course, we already know how time travel works in Marvel Comics, following my extensive analysis of their mechanics.)

The dialogue between the characters is fantastic as well. Kelly Thompson has captured the wit and banter of their usual chats, while maintaining the younger voice of this version of Clint Barton and preventing him from acting too familiar to her. There’s a wonderful scene where the two of them are just talking around a campfire, and Kate tries on Clint’s mask. Even though there’s no action, it still provides some great character moments, and the artwork adds nice little details, like Kate roasting a marshmallow on the tip of her arrow.

Come to think of it, where did that marshmallow come from? No matter, it was an amusing addition.

Of course, scenes like this wouldn’t be nearly as good without the artwork. Stefano Raffaele provides some excellent illustrations for the characters and scenery, while Digikore’s color work makes it all pop. It’s vibrant, clear, and colorful, making it a visual treat. Everything flows nicely as well, both in the comic’s pacing and the progression from panel to panel, or even within the same frame.

To see a prime example, look no further than Kate simply notching her bow early on. One panel quickly flows from left to right, as the eye is trained to follow, showing her drawing an arrow, readying it, and drawing it to shoot. With each different moment, she’s slowly rotating to face the right, and the panel gains more action lines and grows more dynamic with each movement. It doesn’t even feel like there are three drawings of the same character within the same panel, thanks to how smoothly it flows.

When we get into combat, the action continues to move at a solid pace. Some fights are hilariously short, others trace the course of an arrow to its target. One noteworthy encounter, where Clint takes on Taskmaster, is composed entirely of two rows of thin panels across a two-page spread, adding to the claustrophobia of close quarters combat. It’s illustrated nicely, and shows off Taskmaster’s style of copying moves he’s seen visually as Taskmaster explains his own ability (as villains are known to do, a habit Kelly Thompson cleverly has Clint note). Admittedly, Taskmaster’s dialogue does feel a tad cliche during that scene, but damn does it look good. The way Clint’s face is illustrated as the fight ends is just great, although overall the characters in “Generations: Hawkeye & Hawkeye” tend to be properly expressive and emotive throughout.

As the plot develops, we see the two Hawkeyes take on a variety of adversaries, using both their wits and unsurpassed archery skills. It shows off their skills while delving into Clint’s history and Kate’s character in a way that carries and complements the story.

It delves into Clint’s history as he’s reunited with his own former mentor, thematically connecting everyone. Once more, Stefano Raffaele’s illustrations manage to take an older design, filled with goofy masks and bright pinks and purple shades, and make it look impressive. Digikore’s color work continues to add life and vibrance to it, adding an air of dignity to even the most goofy of costumes.

Then we get to the scenery. The mountain ranges are beautiful, and the forests are lush, but it’s when we get to the hidden temple/fortress that the artwork really shines. From the towering temple to the monitor-filled catacombs within, the entire thing looks ominous and adds nicely to the mood.

As the story concludes, characters are brought together and everything connects thematically. It’s heavy on the idea of mentors and role models being important for shaping the lives they touch, for better or worse, and it plays on that idea without getting heavy handed or needing to spell it out for the readers.

There’s a final moment near the end where we get a real heart-to-heart from the two Hawkeyes. It’s another scene where they’re just sitting and talking, but the shots are always shifting, keeping the scene active no matter how little they move. We also get some great expressions from Kate (her “Gag. Gross.” face is not to be missed), as each successive panel grows closer to her face the more heartfelt her speech gets. It’s a wonderful character moment, served in both dialogue and art, and concludes the comic perfectly by showing us what these characters mean to each other while still maintaining a bit of good humor.

Overall, “Generations: Hawkeye & Hawkeye” is an excellent ode to two of the best powerless heroes in the Marvel universe. They’re just two people with bows and arrows, but they’ve got wit, heart, and strong character arcs. Back that up with great writing and excellent artwork, and you’ve got a nice addition to the story of whichever Hawkeye may be your favorite.

Final Verdict: 8.2 – A very solid tale in the “Generations” line. Wonderful character moments, good action, and artwork that carries the story from moment to moment; a must for any fan of Hawkeye, Clint or Kate.