Fair warning: This comic portrays and discusses sexual activity in fairly graphic fashion and as a result is for readers over the age of 18.

Comic books, especially American comic books, tend to live off of spectacle and action. For most Americans, the default vision of a comic book usually involves a muscle bound hero/heroine, dressed in very form fitting clothing, punching a bad guy into oblivion while usually representing some sort of moral code or idea.

But if you’re willing to expand your horizons a little bit, there is a whole world of graphic storytelling out there that is dedicated to ordinary people, living ordinary lives, doing ordinary things with interesting results. Sometimes they succeed and get everything they ever wanted, sometimes it all falls apart in spectacular fashion, but most of the time it just..happens, and that’s the kind of story that today’s comic sets out to tell.

Sometimes these stories can reach the pinnacle of graphic storytelling perfection, sometimes they can wind up becoming incredible boring slogs. Let’s see where this week’s book takes us. 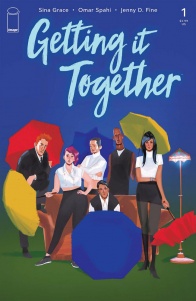 SERIES PREMIERE! Newcomer artist JENNY D. FINE shines alongside Marvel Comics’ Iceman writer SINA GRACE and co-creator OMAR SPAHI in the all-new modern dramedy you didn’t know you needed! Sam and Jack are best friends, and Sam is dating Lauren, Jack’s indie rocker sister and roommate. When Sam and Lauren open up their long-term relationship, skyrocketing tensions send social shockwaves through their friend group and the entire Bay Area. And Jack, caught in the middle of it all, may be forced to take sides in a conflict he never wanted to be a part of. Life gets pretty messy when you’re in your 20s and your friends are your family.

“Getting it Together” #1 is a story about young people living in San Francisco, working the kind of jobs that allow them to afford living in San Francisco, and having enough free time to engage in afternoon sex and very complicated relationship drama. The three principal characters in this drama are Sam: who works at some sort of video production company (I think), Lauren: who is in a band and is currently Sam’s ex girlfriend, and Jack: who is Lauren’s brother and is currently engaged in a relationship with a new guy in town named Colton. Everyone else appears to be supporting characters of varying importance. Feelings are shared, music is played, and everything plays out like a well written sitcom episode about young adults living a pretty easy life in one of the most expensive cities in the world.

Since everyday life has a rather disappointing lack of explosions or super powered fistfights, “Getting it Together” #1 is a comic that lives and dies by the quality of the characters, their relationships, and how relatable the characters sound and feel. Fortunately, co writers Sina Grace and Omar Spahi have a solid knack for dialogue and do a great job of making the characters sound authentic and real without coming off as pretentious or unaware of anyone and/or anything around you. On top of the very good dialogue, everything that happens in the comic is understandable and relatable. There’s no grand proclamations of love, no ridiculous romantic gestures, and no long winded monologues that leave you tired and bored. It’s a comic that sets out to be a nice, low stakes human drama and it succeeds quite nicely.

While “Getting it Together” #1 is a book with well written characters that feel natural and familiar situations, there are some points where the comic does fall apart a bit. For starters, it would be fair to pigeonhole this book as a “dramedy”, a weird combination of drama and comedy that has the unfortunate effect of using simple comedy to dilute the serious moments of the story and the serious moments tend to clash with the comedy. While the book does cover both the comedic and dramatic sides with well written dialogue, there are times when it could have benefited from a firmer commitment to either genre. Also, while the book does a very good job of juggling two co-current plots, there is an apparent flashback near the end that feels confusing and out of place.

You’d think for a comic about people going walking back and forth between parties, work, and coffee shops that do nothing but talk and text to each other that the artwork would be boring, but that’s not the case with “Getting it Together “#1. Artist Jenny D. Fine does a great job of drawing a world where a collection of young people are independent and can afford to live on their own, but haven’t quite figured out how to take care of themselves just yet. Fine forgoes highly detailed character design for a simple, rough, and almost sketchy aesthetic that radiates personality and warmth while allowing an incredible amount of unspoken emotion shine through in the moments where there are no words. On top of excellent character design, Fine’s rough pencils combine with Mx. Struble’s colors to create a warm and inviting feeling that makes the pages feel heavy and luxurious. It’s a comic that knows how to use its rich colors and minimal lines to capture the reader’s attention and not rely on a high octane pace to maintain the reader’s interest.

“Getting it Together” #1 isn’t a grand and epic adventure with high octane stakes and pulse pounding action. There are no heroes, no costumes, no spectacle, and no fantasy. It’s just a bunch of kids, living together, and trying to figure out how their lives are supposed to work and drawn in a way that doesn’t require big explosions or action in order to keep the reader’s eye. It’s a fun little slice of life comic that isn’t trying to take the world by storm, and that’s okay.

Final Verdict: 7.8- With a few noticeable exceptions, it’s a well put together, small stakes, slice of life, sitcom drama comic about people trying to survive and get their lives together, so your mileage may vary.