Artist Brian Churilla makes his debut in the pages of Hellboy. 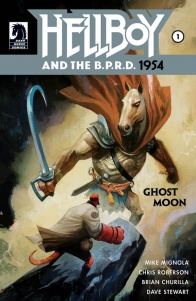 Hellboy hunts ancient Chinese demons in the Walled City of Hong Kong when an old friend of Bruttenholm’s calls in a favor.

A heavily researched look into the early days of the British spy network in the Far East, combined with Mignola’s unique brand of supernatural adventure.

When this story was first announced, I was immediately interested for a number of reasons. First, it’s Hellboy going to China. most “Hellboy” or “B.P.R.D.” stories tend to be set in the Americas or Europe, which makes sense for an organization founded by the U.S. and British governments, but it means we’ve only seen glimpses of certain areas of the world. Asia has barely been touched at all, yet there’s so much there to explore.

Second, this is the debut of Brian Churilla on “Hellboy and the B.P.R.D.,” hopefully the first of many, as both he and Mike Mignola have hinted that he may be a semi-regular artist on the title. This is a very exciting prospect, because while I’ve been enjoying the various artists on the title so far, there’s been a certain lack of visual continuity, which is unusual for a Mignola title. Bruttenholm’s office, for example, keeps changing every time we see it—a different door in a different position, different windows, different chairs… only the lamp on his desk seems to remain the same. Considering this is a location we’ll be seeing again and again throughout “Hellboy and the B.P.R.D.,” I want to see this location’s look and layout tightened up.

But that’s a minor thing compared to the problems with the cast. We all recognize Hellboy from story to story, but some characters are drawn so differently from artist to artist that many readers don’t know who they are until someone mentions them by name. Archie, for example, changes drastically from artist to artist. 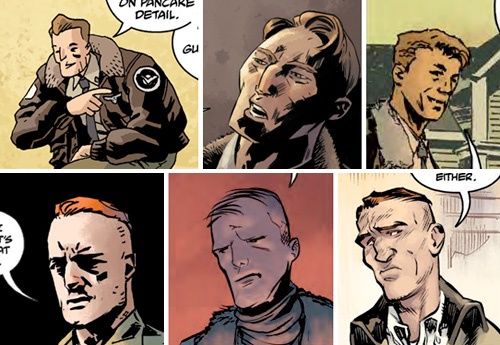 For me, the Archie in my head is Max Fiumara’s from “B.P.R.D.: 1948” because that was the arc where his personality really emerged for the first time. The jaw, cheekbones, and nose still had a consistent look with what Gabriel Bá had drawn before him in “1947.” After that, though, he’s a new character every time we see him.

This is something that stands out, because Mignola’s books are usually pretty careful with this sort of thing, and it’s something that really needs to be reined in. Having a handful of ongoing artists on the series would be very helpful to streamline the look of the human cast and keep them more consistent.

That said, I think Churilla did an excellent job with Susan Xiang, which is a good thing because she’s just as much the lead as Hellboy is here. If I’m nitpicking, the part in her hair keeps changing sides, but otherwise she’s consistent throughout. More importantly, her character comes through very strongly.

Likewise, Churilla really gets Hellboy. His character comes through very strongly in every single panel he’s in.

Churilla has an excellent sense of direction in his visuals too. Throughout the story, Hellboy and company travel from location to location, always moving left to right, so it feels like they are progressing… with one exception. At a certain point, their way is blocked, and for a moment the characters move right to left. It’s a simple touch that immediately makes you feel the characters have had to double back a little bit.

Story wise, this one gets bogged down in exposition right from the start. The first two pages could have almost been cut entirely, and then the story needs to explain the Ghost Moon, then the situation with the British agents, then the history of Kowloon… It’s just a bit too much for a two-issue miniseries. We’ve seen exposition-heavy first issues before in “B.P.R.D.: 1946” and “Hellboy and the B.P.R.D.: 1952,” but those were five-issue stories and they could get away with it a little more. Here, half the issue is spent walking and talking—that’s a quarter of the whole arc. Not to mention there is a lot of redundant dialog. The Bureau was sent to Hong Kong because of a call from Cynthia Eden-Jones. That information could have been covered in a single panel when the team introduce themselves to Roland Childe, but instead it’s spread out piecemeal over several pages.

I’d really like to see these stories trim back the dialog and put a greater emphasis on mood, giving the artist the space not just to show the environment, but to make us feel it. This is becoming a pattern with this title, and I’d really like to see writing lean more on the art to tell the story.

But maybe Chris Roberson’s writing is like this because he’s working with different artists all the time. If he got to know an artist’s strengths over several stories, would his writing lean on them more?

The latter half of the issue is notably stronger than the first. The action picks up and the dialog lessens, and Churilla’s artwork really shines here. Looking at those pages, you can follow the story without reading a single word. He’s clearly a strong visual storyteller, and I’m already eager to see what he’ll do next on the title.

Final verdict: 7. The script is overwrought, but this is a strong Hellboy Universe debut from Brian Churilla.