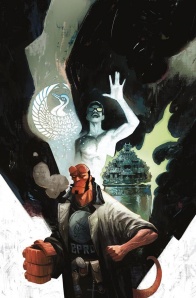 Hellboy squares off against a pair of Chinese demons, while Sue psychically hunts down the source of the supernatural trouble in Hong Kong.

Before I dive into this, I’ve got to say how much I’ve enjoyed Mike Huddleston’s covers for “1954.” They’ve all been fantastic and this one is no exception. I’d love to see him do more.

OK, here’s your warning: this review is full of spoilers.

I had a few problems with the previous issue of “Ghost Moon,” most notably that there was too much explaining going on in a story that was often redundant or spinning its wheels. At the time, I figured it was laying the groundwork for a stronger second issue, but that is sadly not the case.

The second issue of “Ghost Moon” is much worse. There’s more of the same, the redundancy in both plot and dialog, excessive exposition (shockingly so), and too much padding. This last problem was especially baffling, because padding usually shows up in stories without enough story for their length. Here the opposite is true—“Ghost Moon” seems very awkwardly squashed into a two-issue arc. This should have been a three-issue or even four-issue arc. What we’re left with is a comic in which most of the story happens off-page, recapped in clumps of dialog.

The scenes between Roland and Thomas are particularly on the nose as the two blatantly discuss things they both already know, over-explaining both the current situation and their motives while simply just standing opposite each other. That Brian Churilla was able to inject as much life as he did into this sequence is a testament to him as an artist, but it’s not enough.

The thing is, it’s very easy to point at the exposition and say, ‘Ah, that’s the problem,’ but that’s very rarely the case. Excessive exposition is a symptom of a much more fundamental problem. In this case, I believe that problem is the story structure. We have a story in which Hellboy and company arrive in Hong Kong and talk about the plot. They then meet up with Roland who talks to them about the plot. They arrive at the scene of the crime and then split into groups. One group talks about the plot, another group also talks about the plot, and the third engages in a fight which does not progress the story.

I think you can see the pattern. You can get away with a little bit of this (Certainly the scenes with Sue talking to Bao Zhi about the Golden Crane work, especially the way Churilla’s art brings it to life. I particularly liked the way he used Sue’s eye as the eye for the Golden Crane symbol), but this scene is intercut with yet another expository scene. Doing two back to back like this makes for a tedious read. At a time when the story should be brisk and tense, “Ghost Moon” feels like it’s plodding through molasses.

Not only does most of the story happen off-page, but it’s recapped in the most stilted way, devoid of any real emotion. These scenes read like a question and answer segment. In the Sue and Bao Zhi sequence, Sue has a very personal and conflicted relationship to the information that’s being revealed. How does the comic choose to explore this? By literally having the character tell another character that she’s had a conflicted relationship with the subject matter being discussed.

We very rarely get to live an emotional moment through a character in this story. There are a few character beats in there, and I appreciated those, but they’re small moments mostly to add levity rather than gravitas in a story that needed both. 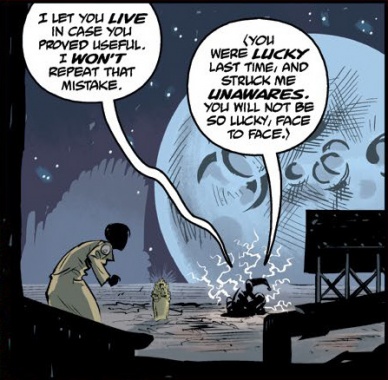 The dialog exists purely so we know how the previous encounter between the two played out… which we already know at this point (or at least it’s so heavily implied it doesn’t need stating). And everything these characters are saying undercuts that they are frantically fighting to get the Hunping. If they’ve got time for long-winded melodrama, they can’t be very engaged by the fight. Not to mention they’re practically talking to themselves since neither one is speaking the other’s language.

I don’t know how this script got approved. It’s a series of red flags. Character and mood are repeatedly sacrificed for plot mechanics. It’s overstuffed, yet full of padding. I mean, the battle with Hellboy, Archie, and the two demons serves very little plot purpose except as a visual for conflict, and it’s so empty it gets repetitive before it’s done. 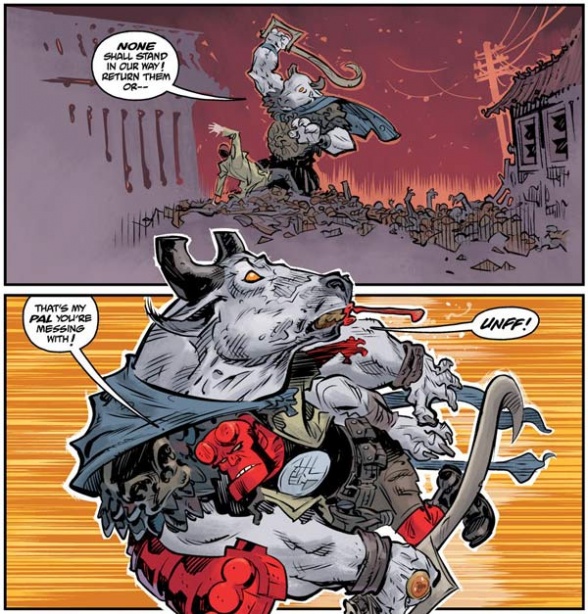 Oh no, Archie’s in danger, but Hellboy saves him. 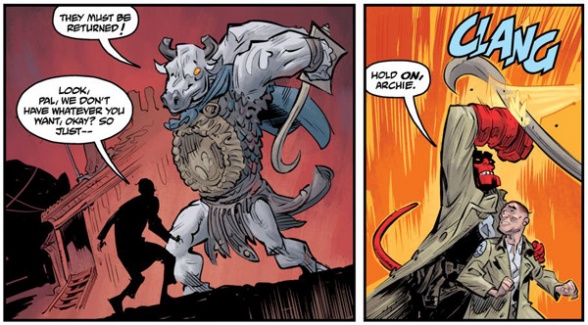 Oh no, Archie’s in danger… again… but Hellboy saves him… again.

And then we have action and reaction moments split apart so that their impact is weakened, such as this moment… 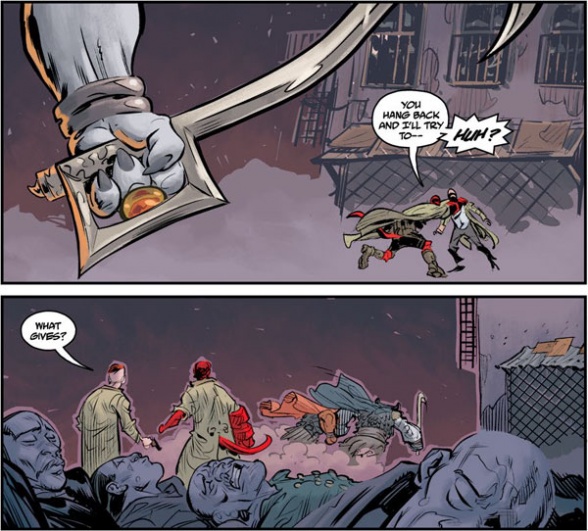 Two pages of plodding dialog separate these two panels. Hellboy’s ‘Huh?’ is all but forgotten by the time we see what he was reacting to. Just by juggling the pages around, the sluggish pacing could be tightened up.

Overall, I really enjoyed Churilla’s art. However, during Hellboy and Archie’s battle with the demons, I felt like the direction wasn’t clearly established. Normally, this wouldn’t be a problem in a fight that’s just about fighting, but a major plot point is that Hellboy and Archie are inadvertently blocking the path of the demons, so the scene direction becomes a crucial point of tension. Especially in scenes when there are great distances between the characters, you’ve got to wonder what was stopping the demons. They had plenty of space to simply walk past. When we find out what the demons really want, we should be able to look back at that sequence and see it on the page, but that’s not the case here.

But I feel like the pieces were there to be used. There is a pile of unconscious bodies nearby that Hellboy and Archie could have been protecting, thinking they need to keep the demons away from them—this sort of visual element could have been used to establish both direction and tension, while also drawing a line through the scene that Hellboy and Archie won’t let the demons cross. It becomes a visual to represent the barrier for both parties. Instead, the bodies don’t appear in the scene until the demons are already running away and the tension’s diffused.

I really get a kick out of Churilla’s Hellboy and Sue though. He’s got good instincts for both these characters. It seems like he’ll be doing more on Mignola’s books too, so I’m really excited by that, especially after seeing Sue’s vision near the end of this issue. I just hope he gets a better script next time.

Again and again in “Ghost Moon” the script hamstrings the artist. The sequence with Sue and Bao Zhi works in spite of the script, not because of it, and the sequence with Roland and Thomas gives the artist very little to work with. Brian Churilla and Dave Stewart are doing the heavy lifting here.

I don’t know why this is happening. I suspect it’s at least partially to do with Roberson’s interest in setting up future plot points, which is fine, except that he doesn’t seem that invested in the set-up. There are bits of this story that feel like they’re there only to service future arcs instead of enriching “Ghost Moon.”

On paper this sounded like a really fun arc, but in execution it’s a soulless mess. If you have multiple scenes with characters talking about the plot, that should be a red flag. If these scenes occur back to back, that’s a major red flag. And if this is occurring throughout your finale, then there’s a good chance you have an anemic second act. I’m very surprised this project wasn’t halted at the script stage and restructured.

Final verdict: 5.5. This was a terrible disappointment. Aside from a few nice character beats, the only good thing about this issue is the art.