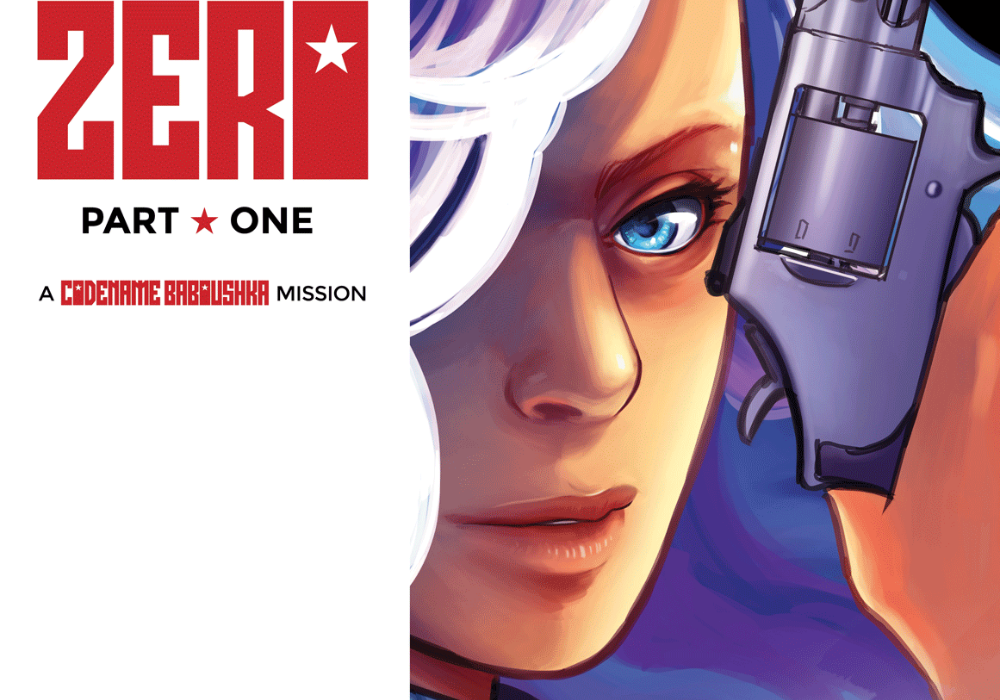 Antony Johnston and Shari Chankhamma’s platinum blonde Bond-shell re-ups and reloads for this latest Codename: Baboushka mission. Is the Russian super-spy back with love, with a vengeance, or with something else entirely? 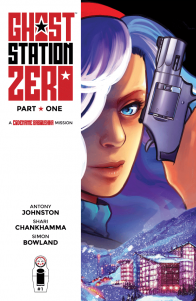 FROM THE CREATOR OF ATOMIC BLONDE – BABOUSHKA’S BACK FOR A BRAND-NEW MISSION! “Ghost Stations” are abandoned Soviet bases from the Cold War, long forgotten and useless…or so people think! When an EON agent goes missing on the trail of a ghost station in the Swiss mountains, Mr. Clay turns to crime-boss-turned-blackmailed-international-superspy BABOUSHKA to investigate—and what she finds is EXPLOSIVE!

“Ghost Station Zero” #1 blows the doors off with the type of cold open that would make the ghost of Cubby Broccoli proud. In the grand tradition of classic 007, Antony Johnston and Shari Chankhamma let Baboushka kick the legs out from under a gang of human traffickers — seemingly unrelated to the rest of the plot — before she leads them on a high-speed chase through Shanghai’s largest shipping container port. It’s an energetic scene that culminates in her launching her sport bike off a bridge and into the Yangtze river, where a submersible getaway vehicle is waiting for her. There’s no gadgets per se, but Johnston and Chankhamma give her a pretty nifty aerial maneuver as she pops open a compartment beneath the bike seat, pulls out a compact scuba mask/oxygen tank, and fits them over her face all before plunging into the river’s icy depths. One could almost expect to see a title card, creator credits, and some form of onomatopoeic depiction of a theme song to follow soon after

Like the staging of that sequence, much of this book feels beholden to Baboushka’s antecedent in MI6. There’s her cleverly phrased ordering of a vodka-based cocktail. Introductions to the first few players wrapped up in her spy game are made in a casino and around a card table. She beds her first female contact within hours of said introduction. And there’s one-liners all throughout. Although, it’s a pretty spotty record here in terms of which ones hit and which ones miss. It’s not as though Johnston makes her speak only in quip, but the cadence with which they’re unleashed – they’re almost exclusively used as scene-cappers – becomes predictable to the point they’re bland instead of bubbly.

When they do hit, though, there’s a liveliness that captures moments of spirited fun in “Ghost Station Zero” #1. “Sleeping isn’t the only way to relax,” Baboushka says, making eyes at her in-flight bartender as a mission debrief with Mr. Clay comes to an end. It comes across with a playful lasciviousness. Of course, much of this effect is due to Chankhamma’s framing within the panel itself. It’s the way that Baboushka subtly tilts her head towards the bartender and the way he smirks back over his shoulder at her that lets us all know this particular spy has vastly different meanings for the words rest and relaxation. Now, if there were more moments like this, I could probably look past what’s setting up to be fairly rote tale of post-Cold War espionage.

But those moments don’t happen near enough. And unfortunately, the art isn’t up to the task of propping up the narrative. While effective in some places — a splash of her busting out of a sea-can on her crotch rocket feels momentous — there’s an overall stiffness to the book. In terms of the action sequences, there are panels that look like they should be more exciting than they actually are. They’re lacking in a certain propulsive quality. To be fair, the storytelling is clear and easy to follow. But it mostly feels like a series of still-life photographs instead of transcendentally conveying a sense of motion.

In terms of the conversational scenes, characters in “Ghost Station Zero” #1 often seem stuck in awkward poses with facial expressions that don’t keep pace with Johnston’s dialog. For Baboushka herself, Chankhamma uses a go-to face where her eyes are squinted, nose is tilted slightly upwards, and lips are a touch open – the cumulative effect makes it seem that she’s perpetually caught in pre-sneeze arrest. Even more detrimental, though, is that overall it feels like the art was rushed. Background characters and details bounce between ill-defined and non-existent. Several times when Chankhamma pulls back for a wider shot, characters lose all definition. And looking at these people with their blank faces makes for an unfortunate gaze across the uncanny valley.

It’s a bit of shame this issue fought against so many misfires. With Atomic Blonde performing at the box office, it would be an opportune time for another Antony Johnston property to catch that momentum. Unfortunately, inconsistencies in the art and a narrative that does little to capture the imagination keep “Ghost Station Zero” #1 from really riding that wave.