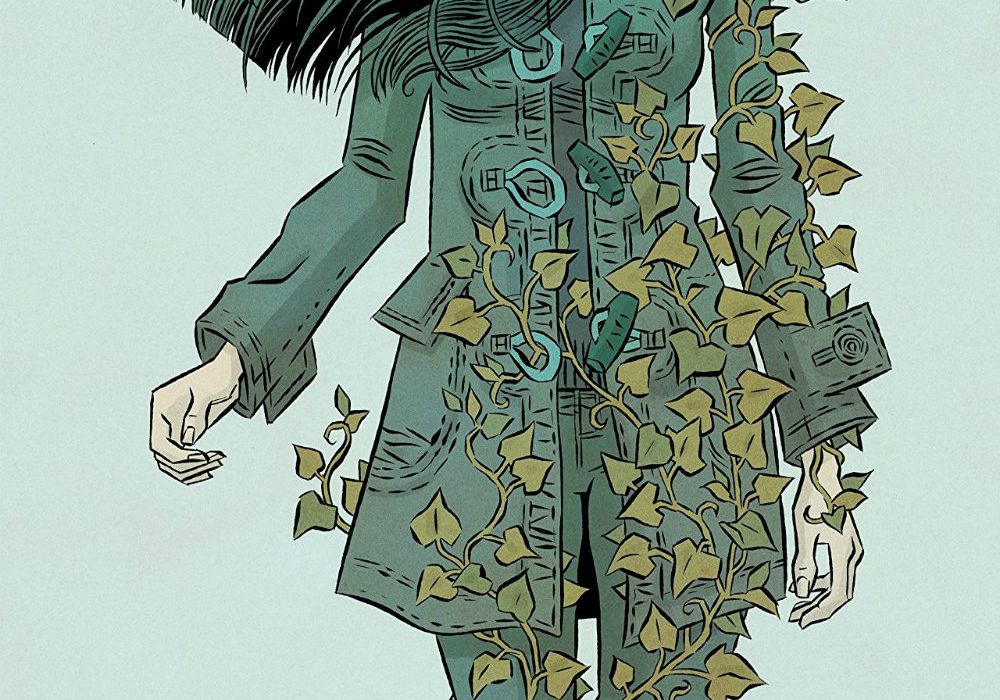 “Ghost Tree” was a thoughtful and interesting take on the protagonist-who-can-talk-to-ghosts trope, with some great family elements woven in. Does the charm of this series hold up into the second issue? 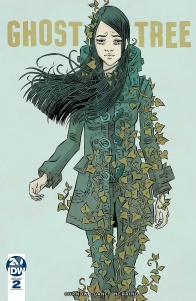 Brandt discovers more about his family’s past as he reels from a surprise return of someone that played a pivotal part in his life. Meanwhile, a malevolent creature begins to stalk the departed denizens of the Ghost Tree…

Brandt talking to ghosts might be one of the most delightful reading experiences I’ve had this year. Curnow opens up the narrative, instantly grabbing you by showing a decapitated samurai ghost holding his head in his hands and preaching of vengeance. Having Brandt rationally reply that he should grasp his new afterlife is so simple and mundane but given the context, it becomes not only relatable but endlessly charming. It not only eases readers into the story’s main concept but gives them a feel for Brandt’s character and how he handles being able to talk to ghosts.

Curnow is also fleshing out this world in subtle yet interesting ways. The idea that ghosts flock to this tree is already a fun idea that gives a place a totemic power, and Curnow builds upon this setting by introducing more rules and characters to it. Demons are introduced as large, floating, centipede-like specters that flock to the ghost tree too. Curnow makes them terrifying by not giving them an agenda – instead of being evil, they are predators, almost a force of nature in their mindlessness. Not only this but Curnow also introduces the element of The Zero, an incorporeal character who disrupts the demons and seems to want to protect Brandt or at least stop demons. We aren’t given any other details about this character, which makes them even more intriguing, and I can’t wait to see how Curnow involves him in future issues.

Curnow also reintroduces a lost love for Brandt in the form of his high school girlfriend Arami as a ghost. This introduces an interesting element for the seemingly pure Brandt: an old flame literally come back to life, who he’s obviously attracted to despite being still (even though unhappily) married. The only problem is that Arami’s scene isn’t as subtly handled as the ghost tree segments are. Curnow is much more heavy-handed in his dialogue, slinging bubbles upon bubbles of speech that slow the pace right down to a halt. There’s still intrigue in finding out the pair’s connection, but it’s revealed at a snail’s pace.

The art here from Simon Gane opens in with some great, adaptive style. From the first sequence of Brandt talking to different kinds of ghosts, I could easily see Gane not only drawing a historical samurai comic in the vein of “Usagi Yojimbo” but also a pulpy horror comic à la Richard Corben. Gane adapts his style very well, from these highly detailed to simple yet gruesome ideas explored in the ghosts. When the demons appear, Gane draws them in a very fantasy-esque style, looking fantastically weird, then proceeds to have them scream at the protagonists with another face popping from their mouths Alien-style. Gane gives the tree setting a very storied history with all these cultures and themes mingling around it.

The setting is also lovingly rendered in the family home nearby the tree. When we first see Brandt walking back to see his Baa-Chan at the house, the little details of the area make it feel authentic, like the dozens of misshapen pots and plants adorning the front porch and the vegetation growing around it but never overtaking it. Inside the house is also a lot of fun. The shot of the family eating together has great little details hidden in the corners, like hanging intricately-designed kitchenware, pots, vases, and dining ware on the table itself. Gane not only makes this feel like a home but a culturally appropriate home, which is just as important and any set designing.

Gane handles subtle emotions with a lot of confidence here, especially during the family dinner scenes. Brandt’s Baa-Chan is one of the more endearing characters of the book just because of how Gane gives here a personality that balances cold annoyance with understanding warmth. There’s a single wordless panel following when Brandt claims that he doesn’t have an agenda, that he’s just happy to be with family, with Baa-Chan giving a face of understanding that he won’t give the real reason for his stay but that she’s appreciative of his presence nonetheless. Gane handles this with subtlety and it’s a moment that is earned without the use of dialogue or narration.

Colors are handled by Ian Herring with assists from Becca Kinzie, and they give the issue a muted, eerily green, yet somehow calming palette. This jade-emerald green tone is present throughout most of the issue, except interestingly enough when the demons arrive. The palette turns an aggressive autumn red, which gives their appearance a lot of narrative importance considering their ability to change the tone of the entire issue, which is clever storytelling on the colorists’ part. Herring and Kinzie also play with this palette changing well, since the only moment we don’t get these almost unearthly tones is when the scene is set within Brandt’s house. The palette is muted, but it’s more homely and welcoming, which also feels like it could be an important narrative decision. In these choices, Herring and Kinzie feel like they are contributing important additions to the story.

“Ghost Tree” #2 is a solid continuation of a great concept, making the world and it’s characters even more charming. There might be some heavy dialogue later in the issue, but every interaction feels endearing and the world is fleshed out very naturally. Similarly, the art is highly adaptable and handles little details deftly to make the world feel truly authentic.

Final Score: 7.8 – “Ghost Tree” #2 continues to be just as charming and even more intriguing in its sophomore issue.