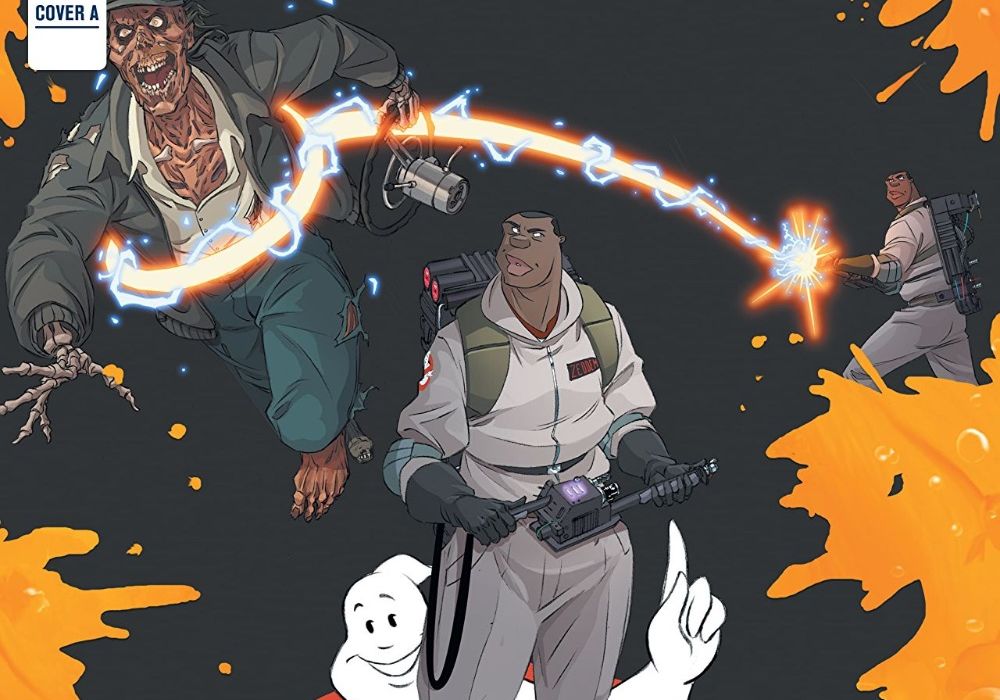 The Ghostbusters phenomenon is one that I never really cashed in on. I do have a soft spot for the original movie, but I’ve never consumed any of the wider media properties surrounding it, including the recent reboot. Now, with another reboot on the horizon, IDW is looking to catch people up on what happened with the original characters in their careers, which is character work I can get behind. Let’s see how “Ghostbusters: Year One” fares with this. 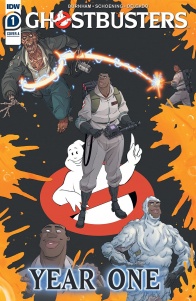 In anticipation of the new Ghostbusters feature film coming to theaters Summer 2020, we look back at the Boys in Grey’s first year on the job, showcasing never before seen adventures! After defeating Gozer and becoming heroes in the city, county, and state of New York, a publisher has decided to cash in with a biography of the Boys in Grey and sends a writer to interview them all for background. He starts with WINSTON ZEDDEMORE, the first ‘buster hired into the supernatural start-up. Winston relates the story of his very first bust, so we can finally know what kind of… ahem, stuff he’s seen that will turn you white!

I love the more personal and singular viewpoint of the Ghostbusters film we get in this comic. Winston Zeddemore, the last member to join the team in that movie, is the focal point in this issue, and he brings a dry, hilarious sense of reality to the original cast. The way that the issue starts out, however, is somewhat rocky. If you’re not instantly familiar with who these characters are that are being introduced in this interview-like format, it can be easy to get lost. Sure, names are given, and with time, the dialogue and events each one talks about are recognizable, but the narrative moves past them so quickly that it makes you wonder if it was really worth setting each scenario up in the first place. All that aside, once we get to Winston’s arc, the voice becomes a lot more clear and enjoyable to follow. Burnham sets Winston up with a voice that feels very family-first-work-second, a true everyman in every sense. I love that the interviewer questions his choice of words when trying out for the job, especially when Winston second-guesses himself for that: it gives him a very human characteristic.

The rest of the story is nicely paced and set up in that it feels like an important mission to Winston, but the rest of the team treat it like any other old job. Having the ghost that the team confronts allegedly be the spirit of Edgar Allen Poe gives the job that kind of celebrity-level notoriety that would make for a memorable story for anyone’s first day at work, and the way Winston accepts the claims about the ghost at face-level makes him very endearing. Once the Poe-ghost disappears causing the team to regroup up in the park to face off with its final-boss form (so to speak), we get some great chemistry between characters that really feels like a bunch of people trying to navigate their professions and come off as interesting. Having Winston acknowledge and accept his fear is a great moment of development for the character that feels natural given how he was setup. Additionally, having a leading character like Peter Venkman say “We’re all still learning, Egon. There’s a curve to this stuff” undercuts his previously established ego with a note of humility that makes him likable.

Schoening has a delightfully animated art-style here that doesn’t try to ape the live-action feel of the movies, but rather replicate the cartoonish tone that the movie embodied. Characters all look interesting and unique because of how specific parts of them are accentuated. Janine Melnitz feels a lot like her movie counterpart not because she looks like an identical copy, but because she always looks jaded and her body language seems to constantly imply she has something more important to be doing. Winston’s look also reflects his past cleverly without accentuating stereotypical ideas of race. He’s well-built and gentle looking because he previously worked in physically demanding jobs that he felt required a sense of morals and strong notions of safety. It’s clever storytelling through character work and defies the need for art to be ‘realistic’ to tell a story.

My thought that I am somewhat mixed on is that whilst Schoening’s characters are lively and interesting, they are static due to the fact that they are so top-heavy. Sure, the characters have exciting facial acting and they are all lively enough with their arms, but you almost never see a character who’s mid-walking or in some kind of forward motion: everyone is firmly planted to the ground. There are moments where this isn’t as much of a problem, like having the whole team assuming a rockstar stance to fire their beams at the Poe-ghost, in which having them grounded seems more like they are trying not to be propelled backward. However, the rest of the issue feels like each character is set up like a figurine on a board game, especially from some of the bird’s eye shots near the end of the issue, which is disconcerting.

Colors here are nicely done by Delgado, who provides a clean, cel-shaded palette for the whole comic. There’s some nice focal work to distinguish characters from the start, like the use of Winston’s bright yellow polo shirt that brings all eyes to focus on him in the panel. Similarly, all the supernatural, ectoplasmic energies have a nice vibrant, otherworldly glow. The energy beams are bright and searing, and the Poe-ghost has an unsettling black/red glow that visually codes him as an antagonist. However, the rest of the colors are a little muted which I feel is a poor way to represent a movie that was so brightly colored from a time period that was known for how bright and vibrant it was. The rooftops, the interiors and the streets all are filled with dull greens and greys, and it’s kind of a bummer for the book as a whole.

“Ghostbusters: Year One” is a decent start with a compelling character-focused premise. Winston is a great opening protagonist to make the series instantly relatable, and Schoening does some great work making each character feel visually distinct. However, there are some storytelling slights from the start of the book and some problems with static storytelling that keep this book from feeling truly great.

Final Score: 6.8 – A solid debut with some storytelling slip-ups, “Ghostbusters: Year One” #1 is enjoyable but much more so to dedicated fans of the franchise.