The familiar faces of G.I. Joe are still there, but the warfare is decidedly modern. 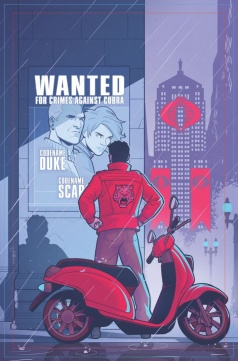 Tyranny is on the rise as Cobra topples governments and spreads its ruthless power across the globe. In these trying times, desperate measures are taken. The new G.I. Joe program recruits civilian spies and saboteurs: ordinary people living in occupied territories who will put their lives on the line to strike back through clandestine but high-impact missions. Join these new recruits as they resist Cobra control, fight to make a better world for all, and find out just what they are capable of.

G.I. Joe is one of those properties that can be problematic for a modern reinvention.  The core themes of heroism and loyalty do carry from generation to generation. But the military roots of G.I. Joe run the risk of having the series come across as cartoonish, over-the-top glorification of the military industrial complex.  Add to this a general sense of reboot fatigue permeating pop culture and the struggles the franchise has have over the years in both film and comics, and one certainly has the justification to hesitate on more G.I. Joe.

But interest remains, evidenced by the continuation of Marvel’s 1980s comic series by IDW and a few new films in development.  What’s the secret to reinvent this franchise for readers who want sophisticated storytelling, but may not be comfortable with a celebration military might? For this series, the solution is to dial down those military aspects and dial up the espionage and spy aspects, all while retaining some of those classic tentpoles. It’s a series for those that miss that USS Flagg toy from their childhood, but also watch Homeland and The Americans while they’re surfing eBay for that Flagg.

Cobra now has the upper hand around the globe, and the G.I. Joe program is now more James Bond than Omaha Beach, recruiting citizens for spy missions to topple Cobra from within. The first of these citizens we meet is Tiger, a young man in Chicago who lost both his parents and boyfriend in an unnamed massacre in Indianapolis that was part of Cobra’s rise to power. Angered at this state of the world, Tiger resists with his delivery service, smuggling contraband in between the aboveground business.  After finding himself in the wrong place at the wrong time witnessing a confrontation between Cobra and Duke, Tiger is now inspired to fight.  The current Joes aren’t so sure if he’s up for the rigor, but recent developments show they now will need every one they can get to throw at the Cobra threat.

Much like his 2016 series “Tet,” Allor’s emphasizes the human side of wartime: substitute teachers turned super commandos, team infighting, the youthful zest to #resist.  It’s decidedly more character moments and conversations than fast-paced action, but this is a new generation for G.I. Joe, so a slower pace is necessary to set up the world. But if the series stays at this pace, that can end up turning readers off. I hope that Allor doesn’t sacrifice too much of the action for the quieter moments. We’re also thrust into a world post-Cobra insurrection.  What are the forces that led to Cobra’s rise? What led the G.I. Joe team underground? Such a backstory would be fascinating to explore in future issues (or even a spin-off).

Longtime G.I. Joe fans will welcome classic characters and old friends such as Duke, Scarlett, and Roadblock, but those new to the universe won’t feel lost in continuity as all of these folks are introduced at the ground floor.  There’s also a fair bit of “show, don’t tell” in this issue with wordless action setting the stage just as well as dialogue. Those who find text-heavy exposition dumps their biggest pet peeve of debut issues will definitely find that appealing.

Chris Evenhuis’s artwork has the flat and two-dimensional look that FX/FXX’s Archer uses so well. Block shading adds depth and dimension when it is needed. Sharp transitions from scene to scene add the cartoon feel, and keep up the pace without sacrificing the personal side of Allor’s script. Small Cobra touches, such as logos on a banner or atop of a building, send the message of just how integrated Cobra has become in this world. And the rest of this world is what we would call normal and contemporary.  It’s not a war-torn landscape, it’s not a desolate wasteland – – it looks just like a Chicago of 2019.  We haven’t seen a single member of Cobra yet, no Baroness, no Cobra Commander – – but small reminders remind us of this “new” normal . . . that’s really not so normal.

In keeping with the character focus, Evenhuis gives significant love and care to facial expressions and making each member of the team his or her own person. And these are heroes that look like America: Tiger is Cambodian, Roadblock is African-American. Scarlett herself is drawn with power and strength: intimidating to Tiger, respected by her peers, not dressed purely for cheesecake (hurrah for action hero women that wear appropriate clothing and footwear for their jobs!) and certainly not without her signature ginger tresses  – – though a touch more pink this time.  Right now, she’s the only woman on these pages, and I remain hopeful that representation I praised earlier will extend to gender.

What surprised me most is that this was quite a colorful book. Like “Blade Runner 2019,” this could be one of the prettiest dystopias I have seen. Resorting to a gritter, washed out palette would be the easy way out, but sticking with bright but not too bright and varied colors emphasizes just how much this Cobra world is the “new normal,” and how easy it can be to get complacent in that new normal.

The Handmaid’s Tale (and its new sequel, The Testaments) make resisting a tyrannical government a hot property right now. And the continued popularity of aforementioned spy properties from James Bond to The Americans show readers have no less interest or enthusiasm for espionage. Coupled with G.I. Joe’s legacy history, Allor and Evenhuis are starting off this fight against Cobra in attack mode with the upper hand.

Final Verdict: 7.5 – This isn’t your parents or grandparents’ G.I. Joe, for sure.  New threats mean new warfare, and the team is ready with a story that pays homage to a half century of history while bringing the Fighting Joes front and center into 2019.

“G.I. Joe” #1 will be available from IDW Publishing on September 18th.