Allison and Treiman’s first issue is a heartwarming, authentic glimpse at university life. Laid back and understated? yes. But brilliant nonetheless. 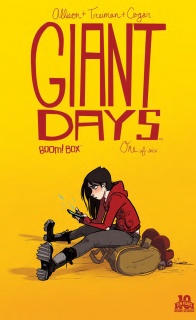 Susan, Esther, and Daisy started at university three weeks ago and became fast friends because their dorm rooms were next to each other. Now, away from home for the first time, all three want to reinvent themselves. But in the face of hand-wringing boys, “personal experimentation,” influenza, mystery-mold, nu-chauvinism, and the willful, unwanted intrusion of “academia,” they may be lucky just to make it to spring alive.

In today’s comic book climate of earth-shattering calamities and mind-boggling superpowers, it can sometimes feel like character development takes a back seat in favour of breakneck stories packed with twists and turns. Allison and Treiman have teamed up to buck this trend and bring the sweet, stylish world of Allison’s webcomic ‘Giant Days’ to the page for the first time.

There is a certain immediate familiarity that comes from Allison’s writing style that makes for a really enjoyable first issue. His three main characters, first year uni students Susan, Esther, and Daisy, may have known each other less than a month but, within the first couple of pages of effortless, open dialogue, it’s easy to feel like you’ve known them for a lot longer. With only six posited issues in this limited run it’s important that we identify with these characters early, and Allison manages to get us onside with minimal fuss and exposition.

The key to the success of his storytelling is rooted in the realism of his dialogue. His characters stroll through their world bickering, sniping, and snarking their way through a Bechdel-Test-smashing number of off topic topics. All the while Allison, a creator who is used to writing and illustrating his projects himself, puts his trust in Treiman to move the narrative forward through a more visual style of storytelling.

And Treiman does not, in any way, disappoint. embracing the original style of Allison’s webcomic; simple and expressive, Treiman enhances Allison’s roster of characters with a more physically emotive bent, exaggerating their motions and poses in a way that lends itself perfectly to the melodrama of teenage life.

Treiman’s minimal backgrounds and facially expressive, slightly cartoonish, characters have drawn numerous positive comparisons to contemporaries like Brian Lee O’Malley and fellow webcomic superstar Kate Beaton. Both comparisons hold true, but her work in this issue could be just as easily compared to the more energetically and dynamic Shojo Manga that are popular both in Japan and on the western market. She channels a very specific kind of human energy through her drawings that means her characters always feel rooted in our world. While there is a current of slightly over the top, almost slapstick element to her movements in certain pages, it steers clear of being cheesy through Treiman’s execution and the cool, calm reactions of the characters.

This issue is a slow burner in terms of plot. There’s a narrative, a number of them in fact, buried in amongst naturalistic dialogue and charismatic characters, but it is by no means the focus of Allison’s attention. The bulk of the book is dedicated to developing character relationships, exploring the university campus, and delving into the potency of Esther’s ‘Drama Field’. While readers looking for a twisting, turning plot may find this book a little light on drama, there is a subtle intrigue that plays throughout, always spearheaded by the relatable faces of the characters. It’s warm, welcoming, and envelopes you in a world that feels just the right side of believable. There’s a consistent level of humour throughout, a light tone that is, at times, laugh out loud, but never feels mean-spirited or exploitative. Similar in tone to Cartoon Network’s superb Steven Universe, ‘Giant Days’ embraces the quirks and uniqueness of its characters, and uses them to its distinct advantage.

For a comic that has come from completely creator owned roots, the meshing of writer, artist, and colorist is so seamless that it’s difficult to believe this creative team has only been on the book for a single issue. Whitney Cogar adds a beautifully playful palette to this issue, keeping the more basic (in terms of background) panels interesting with a varied selection of watercolour style washes, and subtly distinguishing between fantasy and reality through colour changes.

This is an interesting comic in a number of ways. The initial inception – a webcomic commissioned by a significant publishers – is an aspirational tale for every young creator out there. The perfectly combined creative team helps demonstrate how much further a single artist’s vision can be enhanced with the help of like-minded contributors. But, most importantly, the story itself is a refreshingly accessible and relatable drop in a ocean of an industry that is currently obsessed with winks, nods, and references to previous timelines, chronologies, and alternate histories. The characters feel established without alienating any reader, and the world, while clearly more closely aligned with our own than most of the universes in other mainstream comics, is whimsical enough to be distinctly and enjoyably ‘other’. It may feel like it meanders more than most first issues but, just like the university life it seeks to portray, it values the journey just as much as the destination.

Final Verdict: 7.5 – While it’s lacking in the explosions and monsters department, ‘Giant Days’ is a smart, sassy, and confident debut that shouldn’t be missed.