Susan, Esther, and Daisy learn contemplate the slow march of growing older as a dinner party is planned. (Minor spoilers follow below.) 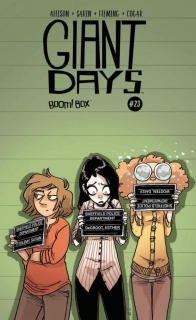 The next-door neighbor calls the police on what may be the most sedate dinner party of all time, causing Susan to deliver a furious and extremely unkind-but totally justified-opinion on the matter.

There are a lot of “funny” comics out there that really just make you, at best, smile and nod and think to yourself, What a clever idea. “Giant Days” is funny. Legitimately funny, actually laugh out loud funny. And its latest issue is a perfect example of how effortless John Allison and Max Sarin (with exceptional inks by Liz Fleming, verisimilitudinous colors by Whitney Cogar, and cracking lettering by Jim Campbell) make it all seem.

#23 finds Susan, Esther, and Daisy all in various states of distress. Susan’s ex is moving on, Esther is looking for a better job, and Daisy has just embarked on a relationship with a girl that is very out of her comfort zone. Like most issues of this series, a longer narrative continues but this story is perfectly self-contained. Esther decides to throw a dinner party, bringing all the aggrieved parties together: Susan’s ex’s new girlfriend, Daisy’s current girlfriend, and a few others besides. Allison does a great job of crafting crisp, hilarious, and authentic dialogue, all while building a compelling plot, replete with conflict, rising action, and a satisfying finish. Like most contemporary comedy comics masters (Your Chip Zdarskys or Ryan Norths) Allison’s work is also filled with heart. His characters can be hilariously loony, but you also feel for them in their frustration, or confusion, or heartbreak. In addition, after over 20 issues, the three main characters, and all their assorted co-stars, feel remarkably rich and established. You start to feel like you’re the fourth member in this circle of dear friends. (Like, if you were lonely and considered fictional characters your friends.)

John Allison is an accomplished and gifted cartoonist himself, so it’s no surprise that each character continues to feel wholly unique in this book, and that goes especially for recent additions to the series. Susan’s ex, Graham McGraw’s new girlfriend Emilia is a perfect rendition of the woman you want to hate because she’s dating the man you loved but you can’t because she’s just too sweet and wonderful. And Dean, McGraw’s (and Ed’s, whose relationship with our three protagonists is too long and drawn out to recap here) roomate, manages to elevate the tired and stereotypical geek trope to new levels weirdness and hilarity.

The characters of “Giant Days” are also distinctive visually, thanks to an art team that is one of the funniest and most skilled in comics these days. Sarin, Fleming, and Cogar manage the impressive feat of making the art alone capable of getting laughs even without the top shelf dialogue. This is never more present than when we get to see how Esther views the comic book wisdom Dean passed on to her at the dinner party which she must use to get herself a coveted job at a local comic book store. First, we’re treated to her blinding frustration that she will owe a debt to such a cretin in one of the all time best reaction faces ever drawn in comics. Then we get to see what Esther thinks of when she pictures characters named “The Hulk” and “Wolverine”. It’s a masterful moment of deep strangeness and undeniable comedy.

The issue is filled with similarly perfectly rendered moments. The art can stretch into caricature when it needs to, and hone in on key emotional moments as well. The drawings feel alive, and that just helps the characters feel the same. The panel to panel storytelling is also fantastic. In a dialogue heavy comic, you might expect pages to feel static, but the expressive work here draws the eye through the story without slowing down the kinetic pace. Sarin is also expert at designing believable clothes that help flesh out each character. When we see Susan, who usually wears a bulky sweater over a button down, wearing a smart dress, tights, and flats, we know she’s trying her best to be a grown up, and it makes her struggles with the role all the more believable.

“Giant Days” is a truly delightful comic. It’s dense without feeling overbearing, and funny the way your best friends are funny. Nobody feels like they’re trying too hard, and yet everyone is clearly at the top of their game.

Final Verdict: 8.8 – As always, spending 23 pages with Susan, Esther, and Daisy is a true delight. Their travails are identifiable, but somehow manage to feel like no one else’s. Allison, Sarin, Fleming, Cogar, and Campbell all contribute to an issue of dynamic and hilarious storytelling.