It’s a Very Special Episode of “Giant Days” as the Sheffield gang confronts the reality of death and grief. 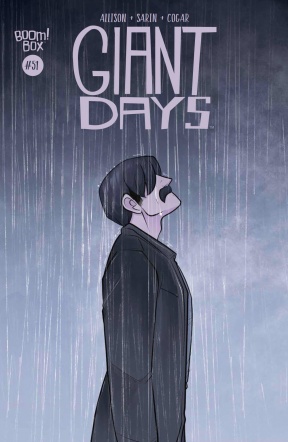 When McGraw’s father dies unexpectedly, the small friend group is shaken. Susan struggles to be there for McGraw, but his usual stoicism has turned into a solid wall. With McGraw at home and Susan in their empty apartment alone, Esther and Daisy have to help Susan deal with someone who doesn’t seem to be dealing. What do you do for someone you love when you have no idea what they’re going through?

No one tells you when you lose a parent that the hardest, most acute forms of grief come long after the ceremonial aspects of death are done. You’re left with a sense of “new normal” – – the desire and need to return to your standard routine, but you can’t ignore the holes in your life. Sure, I did my fair share of crying during the funeral services for my father back in August 2014.  But I also had moments of tears in the middle of the grocery store when I walked past a sale display of his favorite snack.  Or watching news reports of the 2016 U.S. Presidential election, wondering, “what would Dad think of this?” and longing to have him there to talk and debate politics as we did many times over the years after I finished college with a degree in political science. (He called it “we’re making sure we got what we paid for with your college degree.”)

This is the reality of the grief John Allison gives us in this latest issue of “Giant Days:” that grief that the bereaved feel while the world spins madly on, as well as the existential questions for friends and family on how to “be there” when you have no concept of what your loved one is feeling.

Rather than focus on a funerary tableau of scenes, we pick up shortly after the services for McGraw Senior, with university life returning to normal for the group: Esther has won a Major Award, Daisy immerses herself in everything but her love life. Yet Susan, McGraw’s better half, struggles with how to be best supportive when her partner isn’t showing what she thinks should be the “appropriate” response to burying one’s father. Why isn’t he crying? Why hasn’t he cried?  And why won’t he talk to me about all of it?

It takes a trip to the country and a game of checkers for McGraw to finally release the wellspring of emotion – – again, releasing the sorrow at what is on the surface the most mundane of times, but a moment where he felt most ready to do so. By the end of it all, the gang is wishing Esther off on a milestone of the end of college life: that first job interview. It is all life in the face of death.  As McGraw puts it: “Life has to get bigger to make death seem smaller.”

Life has to get bigger to make death seem smaller.

I love that phrase. In 50-plus issues of “Giant Days,” this may be the best piece of dialogue John Allison has ever written. It’s what I feel those that we have lost would say to us. It doesn’t imply that the hurt goes away, but that it will get smaller and smaller over time, easier to fit in around the comforts and celebrations of what makes life worth living.

Allison builds this entire issue around that concept, letting the life of our Sheffield Three remain normal, growing around this devastating life event rather than getting completely caught up in it. It’s a Very Special Episode of the series for sure, but not in the heavy-handed style that us GenX kids (and perhaps some older millennials) remember of our youth. There’s light, and laughter, and fun. But there’s an understanding of the gravitas of McGraw’s current situation, and the friends band together to come to his aid (perhaps some more successfully than others).

If there is any weakness here, it is lack of context. We only got to know McGraw’s family very recently, and hints of the relationship between father and son in the previous issue.  What was it about a game of checkers that had McGraw finally release his emotions?  When he and Susan finally have that talk, we do learn more about father and son (particularly that McGraw was a late-in-life baby, so the spectre of death and age always loomed over him), but it seems too little, too late. Yet, that is the nature of grief, the fact that it is unexplained and non-linear. It doesn’t need to make sense, because the grieving process itself doesn’t always make logical sense.

Based on the solicit, I was initially expecting a bit more explicit exploration around the question of “What do you do for someone you love when you have no idea what they’re going through?” The dive into this question certainly is there, not so much in words but in Max Sarin’s artwork on Susan. From her first entry back home after the funeral service to moments of confusion when she tries to get her better half to open up, you can see Susan is carrying the weight of her and McGraw’s world on her back in hunched shoulders, long, tired faces, and concerned eyes.  She wants that emotional dam to break and soon, but she isn’t ready to handle what will happen when it does. This makes the relief on her face when they do finally have that talk all the stronger and more profound. Sarin handles this cornucopia of emotions beautifully.

I can’t help but muse on the color choices throughout this issue. With the darker subject matter, one could initially expect everything to be bathed in a murky palette, but the perkiness of color that this series is known for remains present and perhaps taken to another bigger level.  It calls back to Allison’s theme of the largeness of life outweighing the largeness of death. There are a few places where color does run towards more stereotypical interpretations with monochromatic darker palettes, such as one moment from the funeral service with a stoic McGraw consoling his mother or Daisy’s attempts to console McGraw – – and in typical Daisy fashion, that ends up being more humorous than sad. The moments when Susan and McGraw work through his feelings with the background of the English countryside at sunset take their influence right from a romance novel or the closing moments of one of those Very Special Episodes: the presentation of the central lesson in a very exaggerated way. With roses, the warm tones of a sunset, leaves gently blowing in the wind, and Susan’s white dress, it’s so overly romantic and emotional that one almost expects the whole thing to conclude with a marriage proposal. It was out of character for a series that prides itself on irreverence and fun. Good thing that bird who had to heed the call of nature came by to break the illusion.

The Sheffield kids are growing up, with this being one of the first adult situations they’ve faced in all their years of university. They’re still themselves at the end of it all, but it’s the first visitor of adulthood knocking at their doors – – and with only four issues left, it’s not going to be the last.

Final Verdict: 8.4 – The first test of adulthood comes to the Sheffield gang, and they have certainly passed it.