Ed Gemmel’s leaving wintry Britain behind for the Land Down Under where he gets to (gasp) meet his girlfriend’s family for the first time in this year’s “Giant Days” holiday special.  Naturally, this isn’t bound to go smoothly — this is Ed Gemmel, after all.  You better run, you better take cover. 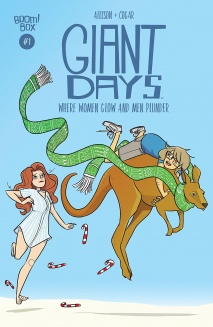 Stop the presses! Ed Gemmel has a girlfriend. With Christmas looming, it’s time to meet her family—in Australia. Which is fine. Who cares that they’re all Manly Men! Ed once… did something manly. That one time. It happened. It’s going to be fine.

It’s nerve-wracking meeting your significant other’s family for the first time. Now imagine you have to do this over the holidays. (Gulp.) In Australia. (Gulp.) On the other side of the world from home. (Double gulp.) Ed Gemmel may be trading in the bleak midwinter of Lewes for the sunny shores of New South Wales, but this isn’t going to be a walk in the park when your lady love’s father and brother are the Manliest of Men: not from Brussels, but definitely at least six foot four and full of muscles.

(I promise this entire review is not going to be a contest to see how much of that Men at Work song I can work in, but to be fair: with that title above, John Allison started it.)

Once Ed lands in Oz and has the initial meeting with Nina and her family, we find out one key detail about them Nina never mentioned: her father Alf Archer is mayor of their town, and host of a popular New Year’s Day regatta and sausage (aka “snag”) sizzle — this year featuring a record-breaking snag and an equally record-breaking grill. (Now we do not know which side of the sausage sizzle onion debate Mayor Archer falls on. However, John Allison did confirm to me on Twitter that events related to that debate played a part in one of the two main narratives in this issue.) Of course there has to be a foul plot afoot: Nina’s ex and his friends work for the Mayor’s main political rival, Digger Devlin, who wants to sabotage the grand plans for the Archer regatta by swiping the snag (not a euphemism) and “God-Grilla.” The boys don’t exactly have the brains to match their looks so they end up swiping . . . Nina’s grandmother instead. It’s up to Ed and Nina to save the day, just what Ed needs to prove his manliness to Alf and the family. Do things go to plan? Well . . . not exactly.  But Ed manages to find a way to redeem himself in Alf’s eyes before he heads back home.

Of the three “Giant Days” holiday specials, this one has to be my favorite, and it’s not just for the change in locale. Ed’s become a star of the series in his own right, and high time he deserved his own central story line (which he received earlier this year in meeting Nina while both were injured). One of the core trio does make a brief appearance here, but for once, Ed gets to be his own person, independent of Susan, Daisy, and Esther. And based on this, could he carry a spinoff series of his own? Absolutely.  The opening pages also introduce us to Ed’s parents, and in those short moments we get the perfect explanation of why Mr. Gemmel is the way he is. More of the Gemmels senior, please. The care and love given to Ed and his circle have me wondering if Ed is John Allison’s secret favorite.  The pride and joy for this character shows and shines.

While the core stories of this special are Ed’s desire to impress the Archer men and the kidnapping of a sausage (still not a euphemism), there’s still many slice-of-life moments from Allison’s pen in this one-shot that are part of what make the ongoing a joy to read. Ed’s flight from Heathrow to Australia resplendent with the allure of the duty free shop and customs and immigration woes. Awkward sexual talk from parents. The “is it a spider or is it a raisin” game. Just like in the regular series, Allison weaves these in without disrupting the main plot and taking advantage of the exotic locale.  These small moments are the beauty of the series, along with the gentle humor that aims for “lovingly tease” instead of “outward malice.”

Credit is also due to Allison for using just enough cultural touchpoints to let us know that yes, we are in Australia, without hitting you over the head with Crocodile Dundee, Steve Irwin, and Vegemite every other panel. (I will leave it to my Aussie colleagues Mark and Rowan to provide the final word on whether or not Allison has done their native land proud.) And like any good holiday special, the main plots of stolen sausage and Ed’s insecurities get wrapped up well before the final panel. As I said in my review of last year’s special, any holiday special that’s done right will “have a self-contained storyline for those who may be watching or reading for the first time, but enough familiarity for the established fans to enjoy.” That’s most certainly the case here. “Where Women Glow and Men Plunder” is comfort food comics, what you expect, need, and crave when the stresses of the world or the holiday season get to you.

Much ado has been made about John Allison on art duties with this special, as it is his first time both writing and drawing the series. Having not read any of the “Giant Days” predecessor webcomics with his artwork, I’m not in a position to say how it changes from web to print, or how it evolved over time. Ed does look a bit scrawnier, skinnier, and haggard than in previous “Giant Days” issues. A little bit of the effects of jet lag, perhaps, or a deliberate choice to flesh out Ed’s insecurities around all these Manly Australian Men.  And indeed, all the men — from Mayor Archer down to the Creek Boys — are fine specimens of Aussie masculinity, with sharply chiseled jaws and biceps for days. Allison has steered clear of overuse of stereotypical Australian slang in his script, but it’s evident in the artwork that these men come from the land of plenty. The women live up to the title and glow throughout, particularly Nina the Southern Cross goddess with wide eyes, perpetual smile, and mermaid-like hair. Whitney Cogar’s colors will certainly warm you up on any cold day; her New South Wales has nary a cloud in the perpetually blue sky, and vegetation is a lush green. It makes you want to hop on a plane to Australia post-haste. Jim Campbell also has fun with his lettering, animating everything from simple sounds to “escape” and “catch.”

Visiting a Land Down Under may not have been what Ed has expected, but it’s one holiday he’s bound to never forget.

Final Verdict: 8.0 — Just what you would expect from any holiday special worth its salt, with the added bonuses of exotic location and focus on a secondary character ready for the big leagues.  Smile and pass me a Vegemite sandwich, and let the beer flow and the men chunder.