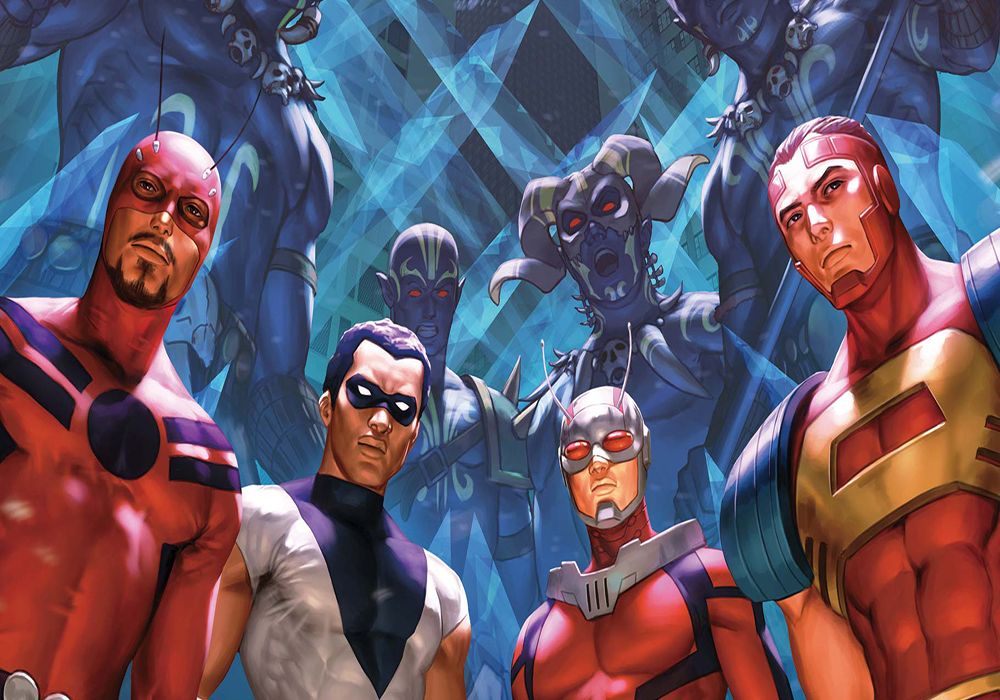 Ant-Man is pulled into The War of the Realms and he has some friends coming along for the ride. Agreeing to a task he doesn’t exactly agree with, but is willing to take on for the right reasons gets him into a mess of Frost Giants. This issue picks up after “The War of the Realms” #2. Some Spoilers Ahead. 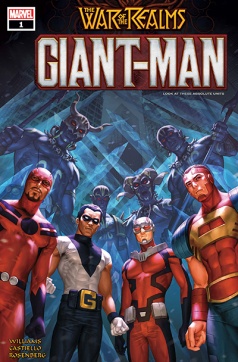 As the War of the Realms continues to wreak havoc on our world, the final remaining realm of the ten, the Dark Elf Malekith has begun his attempt to destroy Midgard. King Laufey has claimed all of North America has the new home of the Frost Giants and has murdered his own son who was raised as an Asgardian: The God of Mischief, Loki. Enraged by Loki’s death, his adoptive mother, Freyja calls upon Scott Lang aka Ant-Man to lead a force of super-powered humans with a very specific skill set to infiltrate the camp of their enemy and bring about their total destruction.

Freya asks Scott to assassinate Ymir, the first Frost Giant and the only one that can rebuild their population. While Scott has dabbled in the darker side of heroism, he isn’t exactly inclined to murder, even an evil being like Ymir. He reluctantly takes the job hoping that a better solution can be made while achieving the best results in this war. On his path to the Frost Giants’s camp, he finds his allies, some welcome, some not so much. All heroes and anti-heroes with the capability of radically changing their size, the team consists of Raz Malhotra, the current Giant-Man and good friend of Scott’s, Tom Foster aka Goliath, following in his uncle Bill’s footsteps, and Erik Josten aka Atlas.

With the team assembled, they must meet their first goal: impersonating Frost Giants to quietly make their way through the Frost Giant’s marketplace to get to their main New Jotunheim foothold. As Goliath is the only one in the group who can not normally achieve the minimum Frost Giant height of 65 feet, Lang gives him a Pym Particle booster. Once disguised they make their way into the marketplace, but of course, things never go as smoothly as our heroes have hoped, but I will let you read the issue to see how it all turns out.

With a dire journey in front of them there is still plenty of levity throughout this premiere issue. Leah Williams goes all in with making this side step a fun and worthy tale. Upon joining up, the characters compare sizes: an easy, and frankly, uninspired joke, but their banter comes so naturally to the story, it is forgivable. As Scott and Raz are the only two who are happy to see each other, the bickering between all four men comes quickly.

The artwork by Marco Castiello is fair, but feels slightly rushed at times, and does not achieve quite the epic scale that feels promised by the book’s premise. Some of the detail work early in the issue is very nice and his eye for filling out pages and how place the focus on characters and other points of interest in each panel is exceptional. That eye gives many pages a cinematic movement, especially in the action sequences and tightly framed conversations. Anytime a scene moves to a wide view or becomes densely populated with characters or set pieces, the detail does lack and that is where the rushed feeling comes in.

Rachelle Rosenberg’s color work is excellent as per usual. Her way of accentuating shadows and depth of field while filling out each frame with vivid colors is wonderful and it is what makes her such a fan favorite. Overall her work is what makes the art standout. Understandably, when it comes to Marvel Comics, there isn’t much wiggle room for any wildly changing styles or experimental work. Everything has to more or less play it safe, so while the art could be a little better or more engaging, what has been produced is still commendable. Joe Sabino gets a good amount of varied lettering work, between the exposition boxes, dialogue for main heroes, Freyja, the frost giants, and sound effects he does a killer job of changing things up for each. As the third part of the art department, he is up to the challenge and brings his A game.

Like a giant-sized “Lord of the Rings” these four superheroes take on more than they would typically want to, but go in full speed ahead. The dialogue moves between heavy exposition and fun banter, and that balance keeps the book moving. While this is absolutely meant to be read as part of the greater “War of the Realms” event, enough backstory is given that casual readers looking for their next Ant-Man/Giant-Man fix can comfortably jump right in. It might not be the best thing to come out of this event, but it is definitely a well-made tie-in that most fans will get a kick out of. The characters are what makes this issue work, even if the story is a little lacking. Sure the premise is a bit silly, but Marvel continues to use Scott Lang’s humorous heist motif, and for the most part it works.

Final Verdict: 7.5, A quite exciting, if not a little half-baked, start to the “Giant-Man” miniseries that brings some welcome humor to the ever-expanding War of the Realms.