As far as superpowers go, I imagine that growing in size is more flashy than it is practical. Regular-sized people can already be unwieldy and in the way. Giant-sized people? Forget it. How Hank Pym or Scott Lang aren’t constantly bumping into buildings or pancaking cars is beyond me. Thing is, the flashiness probably makes up for all that. Remember when Scott went giant for the first time in Captain America: Civil War? Remember Spider-Man’s instant reaction? Yeah. It’s just the most extra, theatrical superpower…I mean, it really leaves an impression. 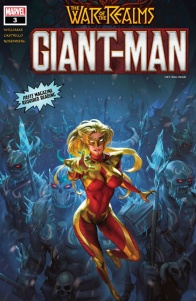 Written by Leah Williams
Illustrated by Marco Castiello
Lettered by VC’s Joe Sabino
Colored by Rachelle Rosenberg
WAR OF THE REALMS TIE-IN! THE BIGGER THEY ARE…Moonstone’s army of primordial Frost Giants is gaining in number with every passing moment. Only Ant-Man, Giant-Man, Goliath and Atlas can stop them! But an unseen enemy is about to get in their way… CAN YOU GUESS THE IDENTITY OF THE MOLE?

This ‘War of the Realms’ crossover has left an impression too. Nowadays, I’m definitely wary of these big events with their countless tie-ins. If the main event’s a mess, the rest tends to be too and there’s no escaping. Every ‘War of the Realms’ comic has been solid though. Some have been better than others, sure, but I can’t call anything outright bad. The “Giant-Man” tie-in has been a fun ride and now we’ve come to the end of our journey.

Giant-Man, Ant-Man, Goliath and Atlas storm Ymir’s stronghold and find that it’s full of surprises. For one, Ymir isn’t the ‘big bad’ but a prisoner. Scott’s been searching for his daughter, Cassie, and it turns out she’s been hiding within the stronghold, waiting for the right moment to take out the actual big bad, Moonstone, Atlas’s old Thunderbolt teammate.

While this is an enjoyable issue, it isn’t completely without flaws. For one thing, why is Moonstone here? Trust me, I’m more than happy to see her. I’m a big fan of Marvel’s Thunderbolts and have read pretty much all there is of the team, from the original Kurt Busiek run to the forgotten Fabian Nicieza Baron Zemo: Born Better limited series. Still, why is she in Florida and how did she even end up on King Laufey’s radar? If there was some foreshadowing in the previous issues, I must have missed it. Likewise, the talisman that turns the tide comes out of left field. The fight in Ymir’s stronghold was noticeably anti-climatic. It might be my own expectations that left me feeling a bit disappointed, but the series so far teased a high-risk suicide run into the heart of the Frost Giants and an epic, explosive showdown.

Marco Castiello’s artwork is pretty solid throughout “Giant-Man” #3. I like the nice, quiet moment that he draws in the final panel, the ‘Giant-Men’ standing on the beach and looking out over the horizon. It’s great that Cassie’s back in this issue, still in her new guise as Stinger. It’s kind of weird, in one or two panels, I could have sworn she looks exactly as she did when Jim Cheung, the original Young Avengers artist drew her. I mean, exactly. The panel where she finally reveals herself is no big surprise (it was telegraphed pretty heavily) but it is a standout ‘hero’ moment. The Frost Giant disguises that the ‘Giant-Men’ wear are a delight. I like how Scott just ties tusks and horns onto his Ant-Man helmet. Throughout the issue, you can see that the blue body paint is fading in some places. That’s very nice attention to detail.

While there are other intriguing features and/or characters, Ymir’s stronghold is pretty interesting to look at for example, Ymir is the most fascinating to see. The Frost Giants’s god catches the eye and demands the reader’s attention. He’s little more than a massive face stretched out across an ice wall. His introductory page is a marvel. Thanks to Castiello, we can clearly see that Ymir is in great pain and completely exhausted. The massive being is surrounded by flames and is slowly but surely melting. The panel where Ymir begs the heroes to kill him is just heartbreaking.

One of my favorite things about “Giant-Man” #3 is the spotlight that it puts on lesser known characters. We rarely saw the original Goliath, Bill Foster, we don’t see all that much more of his nephew. Raz Malhotra, for example, is a relatively new addition to the Marvel Universe. He first appeared in Nick Spencer’s run on Ant-Man and outside of issues penned by Spencer, hasn’t made many appearances. He’s a charming guy and could very well be the only gay Indian superhero at Marvel or DC. If there’s another, I sure haven’t heard of them. The decisive moment where he frees Ymir without hesitation was really great and speaks to his character.

I also appreciate the relationships between these characters. Moonstone, Atlas, Scott and Cassie were especially great this issue. Moonstone and Atlas were two of the original members of the Thunderbolts. These two have a very long history. Karla Sofen’s inclusion means mind-games and psychological warfare. It was fun to see her viciously expose Atlas’s many flaws, aspects of his character that have remained consistent since the original Thunderbolts run. For once though, Atlas dishes it right back. He knocks Moonstone down a peg or two and forces her to turn the tide against the Frost Giants. Erik pushes Karla to maybe, just maybe, be the hero. On the other hand, Scott and Cassie share a father-daughter relationship that is both ordinary and extraordinary. I admit, I have a special place in my heart for these two. Scott Lang is at his best when being a father to Cassie and his heroism has inspired her to be her best as well. I mean, what other father and daughter can argue about sneaking out past curfew while fighting Frost Giants? Only the Langs.

Final Verdict: 7.0 – The Giant-Men are large and in charge.