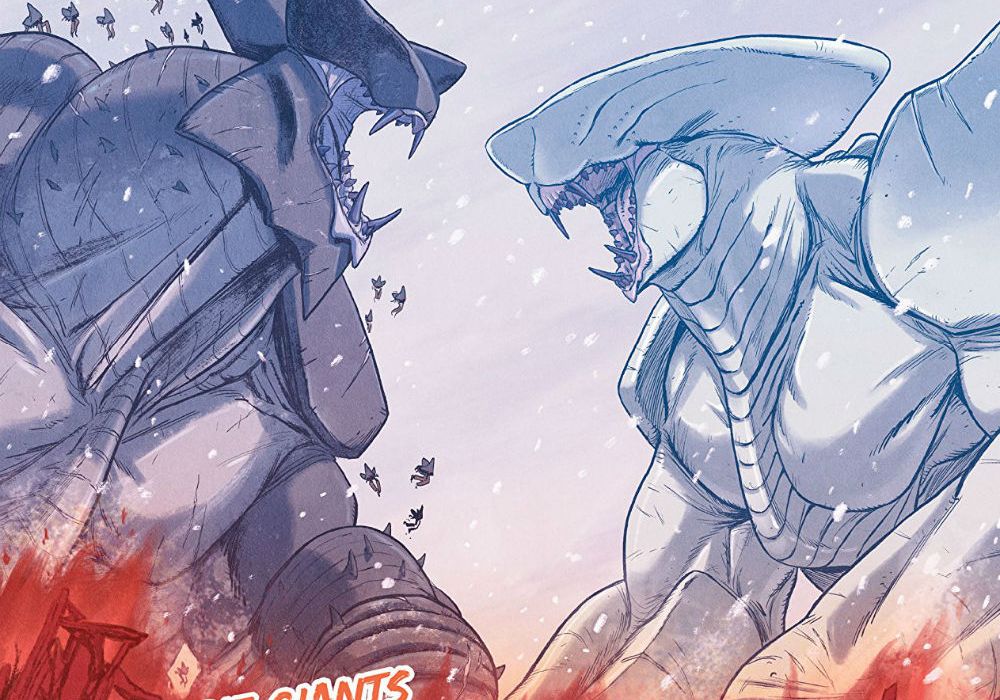 A Kaiju story five issues in the telling, “Giants” wraps up, leaving us with a world of questions. The world the Valderrama Bros. crafted has much more to explore but, for the scope of this mini-series, did it explore enough or is too much left unanswered? Read on and beware, spoilers lurk ahead. 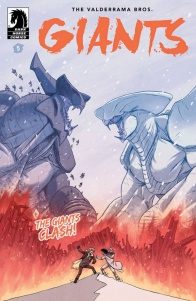 Cover by the Valderrama Bros.
Written, Illustrated, Colored and Lettered by Carlos and Miguel Valderrama

Gogi and his adopted family face his former friend Zeedo and the gang he now controls. Against the backdrop of two giant monsters battling for supremacy, Gogi and Zeedo must determine which is stronger—brotherhood or ambition!

The deadliest monsters live in the heart.

We need more “Giants.” This is a story with big ambitions made by two fiercely talented creators and it’s a shame that they only got five issues in which to tell their Akira-meets-Godzilla story. During the five issues we go the world-building, the lore, and the character work were all top notch and proof that you all need to keep an eye out for the Valderrama bros. in the future.

That being said, this issue was a disappointment for a number of reasons. The passion and talent of the Valderrama Bros. is no less apparent here at the end nor is the art anything less than spectacular. It’s the story itself, and the personal, emotional fight between Gogi and Zedo, that is weak. This by no means drags down the series’ quality but it does put pieces of the rest of the series into relief. Around issue 3 which I’ve previously reviewed, there was a distinct feel that the story’s pace was picking up.

At the time, I was under the impression that this was an ongoing and that the knowledge of a time-skip was the cause of the pacing issue. Issue 4, and this one, both put that to rest. “Giants” was too big a story, too intimate a story to be told in just five issues. There just wasn’t enough time to show the everyday lives of Gogi and Zedo in those early issues before their separation and then, after their separation, there certainly wasn’t enough time to follow both characters as they redefined themselves.

We got smatterings of it, sure, but not enough. Because of this, the blows the two brothers exchange throughout the better part of this issue is less impactful than it should be. We understand the stakes, true, but we didn’t spend enough time watching Zedo nursing his hatred for Gogi and his lust for the Ambernoir or watching Zedo interact with and grow with the surface crew. All the pieces are there but the time skip coupled with this issue being almost entirely climax battle means that we never got to watch the pieces get put together in an impactful way.

Despite this and despite a bit of stiffness in the dialogue, the artistry displayed more than makes up for the pacing problems. As far as showing the Valderramas’ artistry, I can’t pick just one example. However, the two I will pick are the two-page spread as well as this panel. 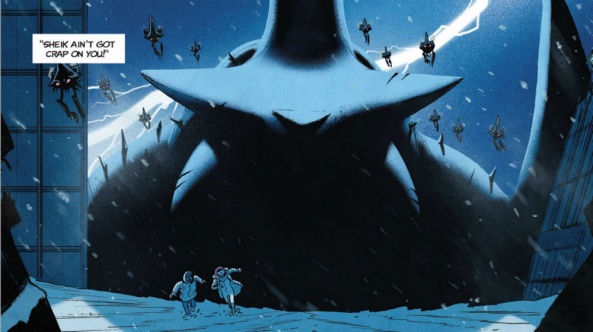 Art by the Valderrama Bros.
The menace of the alien creatures, while diminished in favor of the more personal menace of Zedo, is in full display in this panel. The sheer size of these creatures has never been in question but this panel drives home just how massive and threatening these creatures are.

It’s coated entirely in shadow and rendered differently than the rest of the page. There is something almost Miller-esque about the positioning of the lightning bolt and this shadowed creature. What makes the creature even more imposing is because we can use the bug creatures for scale. In this panel, the bugs, who are behind or just ahead of the creature, are the same size or smaller than Jol and Titia, who are presumably significantly closer to the camera than the bugs are. This means that not only are the bugs much larger than they are but that this creature is that much bigger.

You probably figured out from the previous four issues that the giants are, well, giant but it’s in panels like these that the Valderramas get to use that size to change the tone of a piece. This is no longer a monster akin to Godzilla. It is an unfathomable creature to which we are less than insects to.

The other page, the two-page spread, is a premium example of how Carlos and Miguel build the tension that is central to this issue and show off their understanding of the comic page. The whole page is silent, allowing the art and the action to take center stage. The top panel takes up a third of the page and shows Kara jumping onto one of the bugs in order to save Titia and Jol. What makes this panel fucking brilliant is that it’s not one moment in time/however long it takes someone to say words. It’s a series of burst shots that play out over a short but intense period of time.

Both the bug and Kara are repeated four times before she stabs it to hold on. If you follow their paths from left to right, the bug starts off very far away: small on the page, fuzzy, and less detailed. It then makes a large leap and grows more clear in its second image and so on. Kara, however, only changes in size ever so slightly, the gaps between her images much smaller than the ones for the bug. Once Kara is on the bug, we see Zedo, who’s turned his head, following their path as if he was just watching what we had just seen. The snow is kicked up, reinforcing the speed at which the bug is flying at.

I bring these two examples up because, as I’ve said again and again, “Giants” is a series crafted by two creators who understand comics and comic storytelling. What holds it back was the mini-series format. I’d even go so far as to say that, were this issue to have been issue 8 or 9 instead of 5, it would have been more impactful and the perfect end to a longer but still finite series.

The issue itself is paced as any fight should be – intense, fast, and when it gets personal, slow, and devastating. It’s the culmination of Gogi and Zedo’s story. If only that story was given the time to flourish and expand.

Final Verdict: 6.4 – We need more “Giants” if only to allow the Valderramas to explore a world they weren’t given enough time or pages to explore. As a conclusion, this issue felt rushed and underdeveloped but as a piece of comic art, it was beautiful and tense.