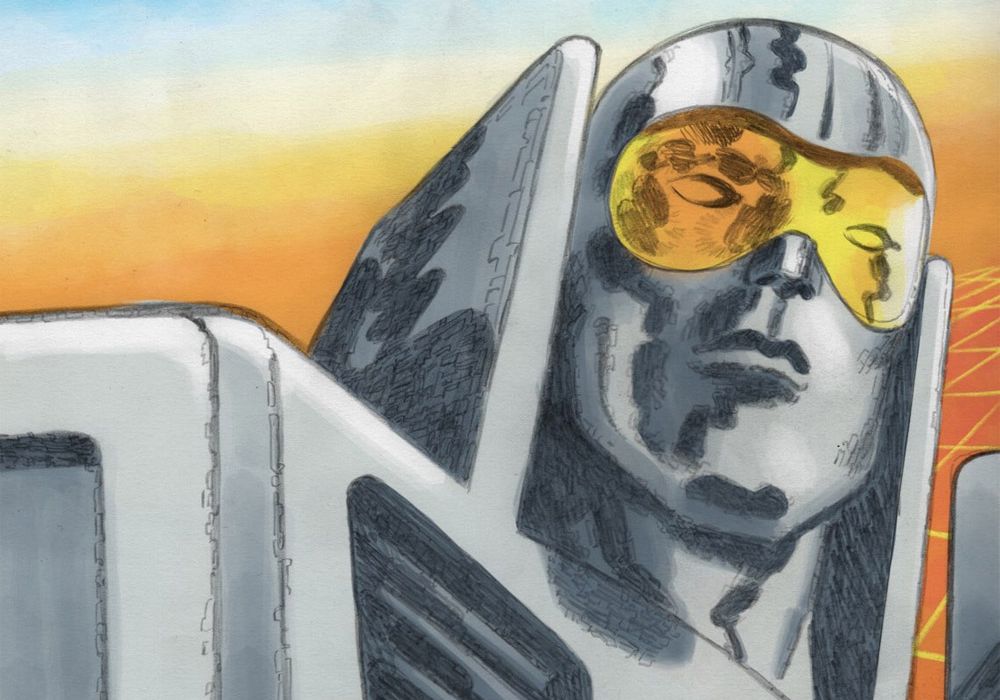 Tom Scioli is a fun creator. Having worked on nostalgia evoking stories before like his own property “American Barbarian” and property mash-up “Transformers vs. G.I. Joe”, he’s undoubtedly the go-to man for rose-tinted stories. Now he’s got his hands on the toy property “Go-Bots”, to revitalize in his signature style. Will he nail it like everything else, or has he finally gone too far?! 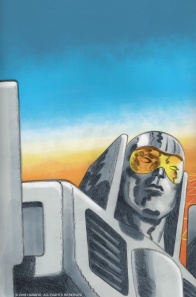 Go-Bots have changed our way of life. Leader-1 is a self-aware fighter jet on a hostage rescue mission with his partner, Commander Nick Burns. Scooter is the personal transport and best friend to undergrad A.J. Foster. Turbo is Matt Hunter’s transforming race car in the hottest sport in America, Go-Bot Racing. Cy-Kill is the champion of the illegal, underground Go-Bot Fighting League. They say they’re here to help us, but are they here to replace us?

As someone who didn’t grow up in the 80s, or who didn’t have any particular attachment to the “Go-Bots”, I’m pleased that Scioli has gone to such an effort to differentiate them from every other transforming toy franchise of the era. Almost immediately, we’re shown the Go-Bots in action, carrying pilots as opposed to say, “Transformers”. Scioli puts them in a very human and gritty setting with a Go-Bot being used to fight a man’s war. Scioli delves deeper into the lore and history of these beings, having gripped and enticed us with the high-stakes dog fighting and incognito action of the first scene. We get both sides of the Go-Bots: acting as military weapons on one hand, and as more domestic comrades on the other, but ultimately shown as creations born of a simple necessity – hilariously, an alternative to finding parking. And what does Scioli do then? Start to cleverly twist your nostalgia as we see Go-Bots in underground deathmatches. There are some fantastic ethical debates underneath the heavy action about the ideas of robotic liberty and slavery, as characters Cy-Kill and Turbo grapple at arm’s’ length. Scioli portrays the original idea of the Go-Bots superbly, before quickly taking it into new territory.

There are some surprisingly layered, human characters in places you wouldn’t expect in “Go-Bots”. This occurs when Scioli subverts the readers’ expectations on Go-Bot pilot Matt Hunter. Scioli at first portrays him as an alcoholic and a bad boy who craves attention, which he receives in spades from his racing career. Yet, when Hunter is taken to the underground fighting ring by T. Coriander Banks (TCB), we see him instinctively kick in a sense of right and wrong. When TCB tries to entice Hunter with the prospect of more attention and wealth within this shady competition, Hunter immediately refuses, before attempting to take his partner Turbo out of there with him. When we later see him discussing the matter with the police, many of the points he’s made are dismissed by the fact that he “REEKS OF BOOZE”, keeping him in character but creating a sense of sympathy with him for the reader. Aside from this, the other characters are likable, but decidedly by the book. A.J. is a fun teen P.O.V. character with a sense of adventure, but not much else is revealed about her at his stage. Likewise, Nick and Leader-1 are inspiring heroic types, but we haven’t spent enough time with them as of yet to get much else other than this perfect stereotype.

Scioli’s signature style works wonderfully at revitalizing older properties whilst giving them a modern sensibility. This is especially evident in his rendering of the Go-Bots themselves. Their build and composure are very much reminiscent of the old, 80s Marvel “Transformers” style, with the robots having more of a softness to their edges rather than looking like shiny, sharp boxes. Yet Scioli brings a level of depth and grandeur to them each time they appear on a panel, making them distinctive especially from the humans scattered around them. When we see Leader-1 first turn from jet to robot form, it’s done with a slow, deliberate sequence that not only shows the jet form transforming to a robot but the maneuvers it takes to do this through the air, lending a lot of believability and wonderment as the transformation occurs. And once he appears amidst soldiers in robot form, he’s rendered as a titan, commanding all the lighting and focus of the panel on himself and looking powerful.

One thing that separates Scioli from a lot of other modern artists is how he incorporates older methods of storytelling and manages to make them work with the medium’s current context. This is most obvious here with pages consisting of up sometimes up to twenty panels. In any other modern artist’s hands, it might seem overcrowded and cumbersome. However, this paneling works perfectly with Scioli’s simplistic art style and fast-paced dialogue. The first page we get a real sense of this is with the introduction to A.J. and Scooter, a sequence which could easily take up to eight pages in a more decompressed style. However, Scioli strips it down to the bare essentials. We get an example of a normal human with a Go-Bot in a more casual relationship, the Go-Bot with an agenda other than war, A.J.’s school which happen to teach Go-Bot history, and a quick origin rundown of Go-Bots and what makes them unique. As much as this more compressed style of storytelling works, we also get it operating inversely in the sequence involving TCB and Hunter. Scioli here chooses to use each panel to highlight how Hunter reacts emotionally to everything TCB is saying and the sights around him. It gives us a deeper, and subtler insight into Hunter’s character and slows the story down to hit more emotional beats, still without feeling like a drag.

Scioli’s crayon coloring style might be the biggest factor that evokes nostalgia in his work, and he handles it well to deliver a muted yet vibrant, neon style palette here. We get some beautiful, almost watercolor-like washes in the background through the scenery, from the very first panel depicting jets in the dusk sky to the prison spotlights reflecting against the blue and purple blend of the scene that Leader-1 first crashes into. Scioli uses coloring well her to convey a certain type of scene, too. When we see a panel covered completely in a red wash, we know that it’s Scioli showing us a scene from a Go-Bot’s viewpoint, almost like an infrared radar. Similarly, when we see Hunter showing the police the massacred bodies at the scene, there’s a great use of spotlight coloring to indicate a crime scene. It’s minimal and simplistic coloring, but uses semiotics well to convey a message to the reader.

“Go-Bots” #1 is the reboot that no one knew they needed in their life. Scioli cleverly distinguishes the franchise from other 80s properties, while exploring new story ideas and creating interesting characters. At the same time, Scioli’s art is as evocative as ever. The simplistic art style combines modern and classical storytelling methods to create a story unlike anything else you can find on the stands. If nostalgia, giant robots and general fun is your thing, look no further than here.

Final Score: 8.5 – “Go-Bots” #1 serves as a great debut to Scioli’s re-imagining of the 80s franchise, with interesting story concepts and characters, and a fusion of modern and classical visual storytelling.