I fell in love with Power Rangers when I was little, just like any other kid. Unlike any other kid…I wasn’t actually allowed to watch it. ‘Too violent’, according to my parents. It was forbidden fruit for me. I remember playing with my Power Rangers In Space walkie-talkies, having no idea who the characters actually were. I would learn details from my cousin second-hand. I secretly borrowed a VHS copy of Turbo: A Power Rangers Movie and watched it during my parents nap with the volume low. It wasn’t until my late teens that I watched the show in earnest. By then, it just wasn’t the same. 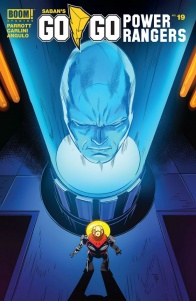 Cover by Marcus To

Written by Ryan Parrott
Illustrated by Eleonora Carlini
Lettered by Ed Dukeshire
Colored by Raúl Angulo
Rita Repulsa must go to war to obtain the Green Power coin. But there’s just one problem—there’s one magic user who may be more powerful than her—someone she had hoped to never see again.

Don’t get me wrong, Power Rangers is still fun. There’s giant robots, bright costumes and karate, how could it not be fun? The show is for kids though and if you aren’t in that demographic, you’re painfully aware of it. Most episodes are formulaic to a fault. It goes plain clothes fight, morphed fight, Zord fight. The comic relief characters, the Bulks and Skulls, are pretty irritating. I mean, there’s a season called Super Megaforce, I don’t even know what that means.

Now, I would highly recommend the BOOM! Studios comics. These are more geared to teens and adults, not dark and gritty but nowhere near as corny or cringe-worthy as the show can get from time to time. It’s the best of both worlds and I get to indulge in the show I was denied in my youth.

In the last few issues of “Go Go Power Rangers” from BOOM! Studios, both the heroes and villains have had to deal with people from their past. For Rita Repulsa, it’s the spirit of her mother. Lady Fienna tried and failed to keep Rita hidden from her evil villain father, Master Vile. Rita followed in his footsteps and brought her mother back in an attempt to access the Green Power coin. Fienna learned her daughter’s sinister intentions for the Power coin and stood to oppose her. In this issue, she fights Rita and tries to reason with the witch, but she’s a couple thousand years too late. Rita Repulsa doesn’t hesitate to imprison her own mother.

While that confrontation comes to a violent head in #19, trouble is still slowly brewing for the Mighty Morphin’ Power Rangers. The presence of Alpha-1, Alpha-5’s predecessor, is starting to cause a rift in the team. Trini thinks something is amiss with Alpha-1 but the rest of the team doesn’t buy it. This leads to a fight with Jason, her secret boyfriend. Alpha-1 also quietly takes issue with Zordon’s relationship with the team, believing his affection for the Rangers keeps him from doing more in the war against Rita.

One of my favorite things about “Go Go Power Rangers” is how it adds depth to its characters. On the show, Rita Repulsa’s character basically boils down to cackling super-villain. If she had a mustache, she’d be twirling it. In this issue, you may feel sympathy towards her. She was brainwashed over centuries after all. The witch also feels like a genuine threat, a menace to be wary of. Rita betrays her own mother which is a whole other level of villain. Even Vader loved his mama.

The Power Rangers are compelling leads too, more well-rounded than the always cheerful, color-coded martial arts enthusiasts on the show. We see Jason and Trini dealing with relationship drama while Zack and Billy bristle at being treated like children. Kimberly has the most interesting subplot with her parents’s divorce but unfortunately we see the least of that.

The plot is engaging too. Alpha-1 and Lady Fienna are some of the latest characters to be added to and improve upon the canon. I have no idea exactly what kind of threat Alpha-1 is going to present to the team but I’m definitely excited to see. The comic breaks away from the formulaic nature of the show while embracing the best parts of it. Rita has brought her mother back to try and access the Green Power Coin which means we’re probably building towards Tommy Oliver.

The art is solid throughout this issue. The colors are bright and fun, as they should be for Power Rangers. The fight scenes are kinetic and engaging. At the start of the issue we’re treated to the fight between Rita and Fienna, witch versus witch. I’m impressed by Fienna’s magical skills and can’t help but feel bad for her. Her expressions, drawn by Eleonora Carlini, make it clear how painful it is for her to fight her own daughter.

I also loved Billy doing his best impression of Iron Man in his prototype Triceratops armor. Why should the Red Rangers be the only ones to get battlizers? That was definitely a standout moment and the armor is so cool-looking. If I was a kid again, I’d definitely want that action figure.

Heck, I may want it now.

Final Verdict: 8.0 – This issue was Morphenomenal!