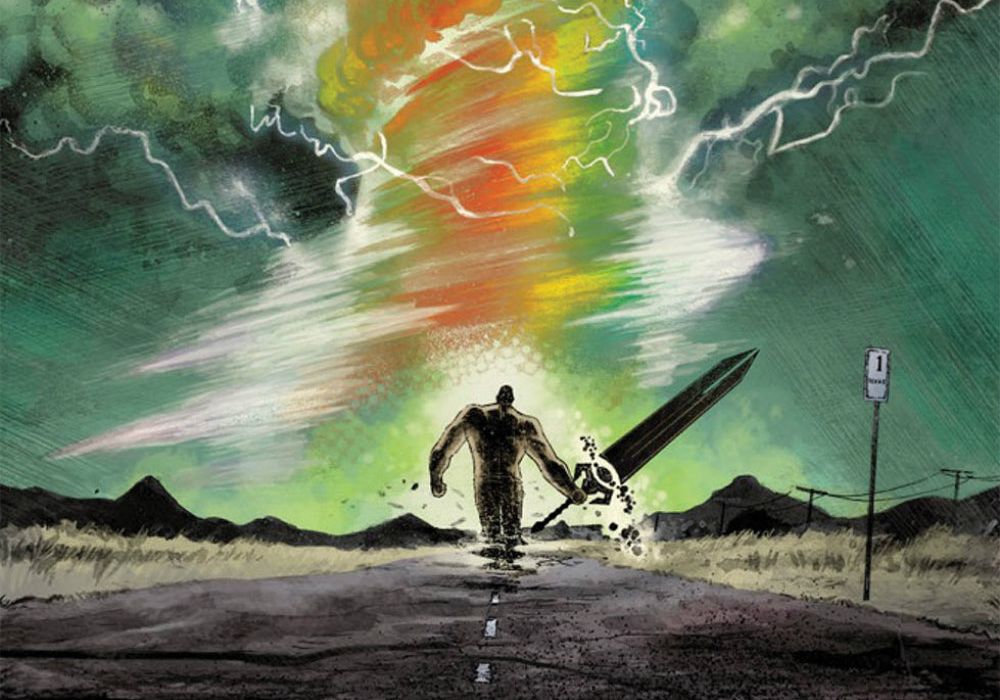 The team behind “The Paybacks” and”Buzzkill” return with a brand new series that is a positive departure from what they’ve done already. Read on for our spoiler free, advance review of “God Country” #1. 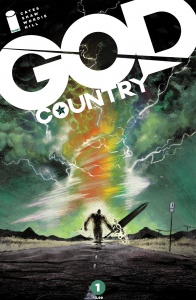 Written by Donny Cates
Illustrated by Geoff Shaw and Jason Wordie
SERIES PREMIERE. Emmett Quinlan, an old widower rattled by dementia, isn’t just a problem for his children—his violent outbursts are more than the local cops can handle. When a tornado levels his home—as well as the surrounding West Texas town—a restored Quinlan rises from the wreckage. The enchanted sword at the eye of the storm gives him more than a sound mind and body, however. He’s now the only man who can face the otherworldly creatures the sword has drawn down to the Lone Star State… “So much fun to watch creators find that next level. Go, Cates, go!”—BRIAN MICHAEL BENDIS

Texas, for good and bad, has a reputation. It has a long and contradictory history and because of this, it makes for a perfect fictional setting. With “God Country” #1, we’re taken deep into Texas for a modern day epic tale that, at its core, is very personal. “God Country” #1 is another winner for Image Comics thanks to a strong premise and a creative team that’s completely in sync with each other.

“God Country” #1 tells the story of the Quinlan family. Roy Quinlan, father and husband, has moved back to his hometown to take care of his father Emmett. Emmett suffers from dementia and has become violent and erratic to the point that law enforcement has had to get involved. During one incident, a massive, completely abnormal tornado simultaneously hits the region and destroys the town. What’s left is something new, something different and something ready to blaze a new path.

I’ve often complained that first issues as of late aren’t doing enough to hook people. They’re settling on their big premise and not giving us enough about everything else. Comic shop shelves are getting crowded so I need to get that hook from a #1 that will keep me around and make me want to expand my pull list. “God Country” #1 is structured so well and uses each and every page to its potential. “God Country” is framed as a tale being told to us and we are thrown right into the meat of this without any time wasted. Not only is the premise clearly laid out with a great cliffhanger but we have plenty here to connect to emotionally. It becomes almost impossible not to want to come back.

“The Paybacks” and “Buzzkill” dealt with some exaggerated characters but they were still complex. With this team up, Cates and Shaw get a little more grounded despite the fantasy elements that come into play later. Shaw, in particular, has the luxury of visually going bigger as the plot progresses. “God Country” #1 features a relationship that a lot of people will undoubtedly connect to. Roy and Emmet are facing a situation that many have been through themselves as Emmet begins to lose himself to dementia and Roy is left with the burden of it. Roy gets put in a place where he has to decide if it’s worth keeping him out of a home and the way Cates handles this is not at all exploitative and that’s what makes it hurt so much.

Geoff Shaw and Donny Cates have worked together a few times in the past and because of this, I usually know what to expect from Shaw’s work. However, “God Country” #1 is the start of something very different for this pair. Shaw’s art is simply amazing. I’ve never been to Texas so I cannot vouch for true authenticity but the setting is exactly the kind of small town, middle of nowhere look the story needed. Shaw’s landscapes are vast and detailed with each panel having a true sense of place instead of a rushed, colors only background. Shaw’s characters have a perfect simplistic styling to them and, with that, there’s some charm. What starts off as a calm, composed quiet town quickly turns into chaos as the storm comes. Shaw is basically drawing two storms – the one outside and the one in Emmett’s home. Each are drawn wild and unruly and Cates gives him the space to make all that happen. This and the expressive characters are doing heavy lifting and I found myself drawn to this world almost instantly.

Towards the end of the issue, Shaw really gets into the fantasy elements that will come into play. I won’t spoil what those are but Shaw’s work is damn near flawless. These elements are huge and will contrast with the Texas setting a really fun way. Colorist Jason Wordie is a great fit for Shaw’s pencils. He brings a nice mood to the setting and when we enter Emmett’s house and get to the storm itself, he plays with shadows and lighting in a really meaningful way. Emmett’s house becomes something almost out of a horror movie which matches well with the awful things dementia does to people. The dustiness of the outdoor shots have this eerie, quiet feel to them but with Wordie’s colors, there are layers and it doesn’t become just a mess of brown.

“God Country” #1 is a strong debut from a team with a past that continues to push forward to get better. I’m eager to see all the different direction this story can go in because I’m genuinely rooting for this family.

Final Verdict: 8.5 – “God Country” has the potential to be truly great. This story will be special.