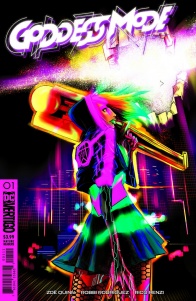 Don’t miss the start of a new series by Hugo Award nominee Zoë Quinn and Spider-Gwen co-creator Robbi Rodriguez! In a near future where humanity’s needs are provided for by a godlike A.I., it’s one young woman’s horrible job to do tech support on it. But Cassandra Price’s life changes forever when she discovers a hidden digital world beneath our own, one where a group of super-powered women are locked in a secret war for the cheat codes to reality.

Is cyberpunk still a thing? I mean, don’t we already live in a world where “algorithmically curated” news and social media feeds work overtime to target our own highly specific tastes and interests so that corporations “can squeeze as much money as possible out of us and keep us working bullshit jobs until we die?”

That last bit is a direct quote from the fictional Cassandra Price, self described “code janitor” and protagonist of “Goddess Mode” #1, but it could just as easily be pulled from a statement by Occupy Wall Street or the disillusioned observations of a feisty young “new media” commentator. It’s definitely not wrong, I just don’t think it’s nearly as radical – or even jaded – as writer Zoë Quinn thinks.

Stated another way, the genie is out of the bottle. Artificial intelligence and machine learning are already here and get exponentially more powerful all the time. The Singularity approaches. And I don’t think anyone truly believes that the corporations and researchers driving this change are entirely altruistic. Quinn’s story may be set in a near future dystopia, but the world she creates isn’t exactly a stretch and doesn’t break any new ground.

At least it’s colorful as hell. There’s a lot of text to work through in the form of backstory and worldbuilding, but in the meantime, Rico Renzi’s rave-worthy neon palette will have you waiting for the bass drop. This is definitely not the stereotypically gloomy, monotone grey-green-black of so many near-future aesthetics. In fact, it’s the opposite, especially when Cassandra finds herself within the sprawling A.I. machine. Garish colors abound in this version of cyberspace – from bright yellows to screaming pinks, blinding purples to lime greens – and it’s a welcome, refreshing change from what we’re used to seeing in this context.

Unfortunately, Quinn’s script doesn’t quite keep pace. Spider-Gwen co-creator Robbi Rodriguez’s art is incredibly dense, packed with information, multilayered and unique – the definition of eye candy. The story, on the other hand, is pretty much a remix of all-too-familiar tropes and played-out beats: the young woman in search of her father, seemingly ungrounded and directionless without him; the hacker who breaks into the system, only to be promoted rather than fired; the ghost in the machine whose true intentions remain unclear; and a mysterious disease, known as Tucker Brady Syndrome, which may or may not be curable for the wealthy elites who remain hermetically sealed in containers awaiting their ultimate fate.

To be clear, story structure and plot points aside, Quinn definitely gives us a strong, likable and relatable protagonist in Cassandra Price, as well as some smart dialogue. For example, when it’s revealed that Cassandra has committed perhaps the biggest sin by hiding her metadata and bypassing advertisements WITHOUT a premium subscription, her transgression is described this way: “Instead of delivering branded, curated content directly into HER MIND, she has reprogrammed me to substitute pictures of HER CAT, conspiracy theory feeds, and a playlist of late 20th century ska music videos.”

Honestly, that sounds pretty dope. More of that attitude, please.

Final Verdict: 7.0 – As a first time comic creator, writer Zoë Quinn stumbles into the all too familiar trap of trying to cram way too much into the debut issue. So far, the art keeps things going, but a simpler script would be nice.