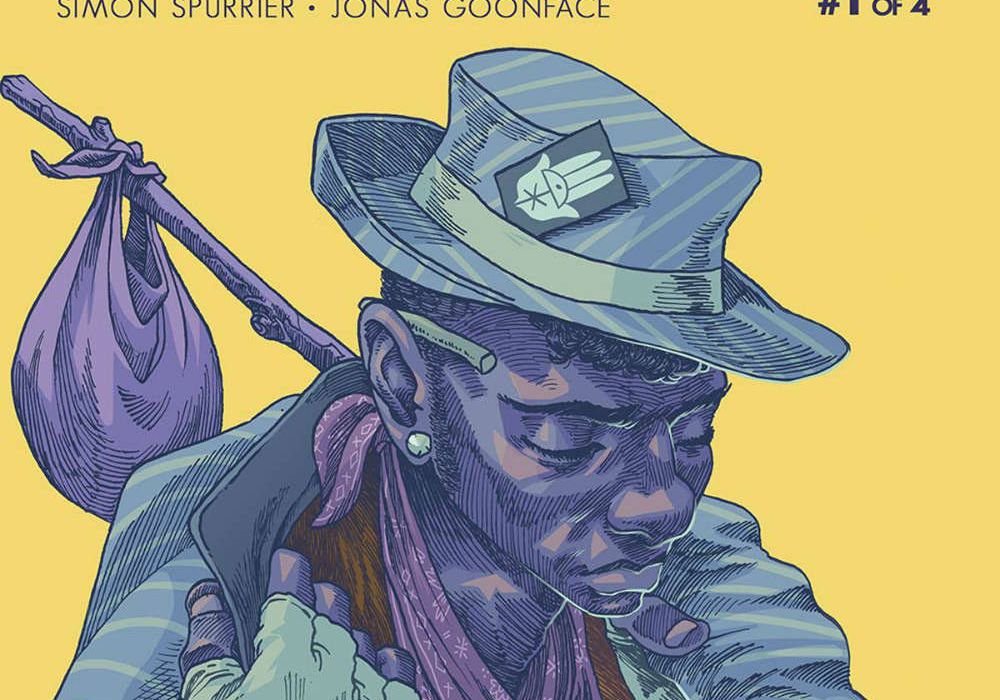 Simon Spurrier is no stranger to giant, immersive worlds as evidenced by his critically acclaimed works, “The Spire” and “Cry Havoc”. His latest series with collaborators Jonas Goodface and Colin Bell, “Godshaper”, looks to hit all the same worldbuilding notes that Spurrier is known for, with a unique religious context and brilliant art. But can it succeed in pulling all this off? 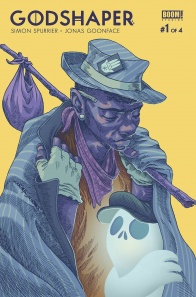 Written by Eisner Award-nominated writer Simon Spurrier (The Spire, X-Men Legacy) and illustrated by breakout talent Jonas Goonface, Godshaper introduces a vast world where there’s a god for every person and a person for every god…though for Ennay, unfortunately exceptions may apply.

People like him are Godshapers, godless social pariahs with the ability to mold and shape the gods of others. Paired with Bud, an off-kilter but affectionate god without a human, the two travel from town to town looking for shelter, a hot meal, and the next paying rock’n’roll gig.

Spurrier is a master of working otherworldly concepts into a seamless, pleasant read, and his work here is no exception. In the world of “Godshaper”, almost every person has their own god which acts as a sort of swiss army knife-pet – save for the ‘one in ten thousand’ who didn’t get so lucky. Spurrier’s protagonist Ennay, who just so happens to be one of these scant few, is a likeable character leading an exciting double life. The first sequence involving Ennay as a vagrant-shoe shine type character is charming and very compelling to read. But then the setting changes, and Ennay shifts from this to an unforgivingly flamboyant popstar personality. It’s dramatic, and I love that it’s challenging stereotypes and representing queer communities, but the change feels a little drop-the-mic to be convincing.

The setting here is going to be the biggest pull for readers, and Spurrier goes all out in making this world full of pre-established rules and fantastical creatures. I love his method of introducing us to new concepts through Ennay’s interaction with the world: we’re never bogged down by masses of exposition explaining this new toy, but rather trusted to understand through clever visual storytelling. This is best exemplified with how he depicts the nature of a Godshaper’s trade. The only thing Spurrier directly tells us is that a shaper is a rare occurrence and they possess the ability to shape ‘godflesh’. What we learn from Ennay’s experience shaping a rich man’s god is much more enriching than simple dialogue though – we see that he can change their powers, appearance, plus shown that shapers are despised by general society.

The momentum that Spurrier builds to hit the endpoint is another great aspect of this issue. Once our characters and conflict is established, Spurrier writes a sequence that simultaneously shows Ennay wrestling with his inner morals and Smudge (someone who has come to Ennay for help) confronting the boss Bogg who’s god is a colossal beast of a thing. Spurrier has Ennay describe what will happen as it actually does happen to her, as he tries to repress the feeling to go and fight for her. The moment finally comes and feels like a huge emotional payoff, leaving readers exhausted and eager to consume more.

Jonas Goonface has a very loose, anything-goes approach to his work in “Godshaper” and it fits in wonderfully with the overall tone. The opening scene sets up the context beautifully here thanks to Goonface’s style. He draws wide-open hills and shanty towns with a touch of dystopia and mess to give it some real charm. The nature of the person god concept works in well with this also – each scene is made more crowded and lived in by people having their deities crawl and cavort all around them.

The art here is immediately immersive in action scenes too. In the shaping scene towards the start of the book, Ennay essentially wrestles Bogg’s god into submission before shaping it. The sequence that takes place following this is highly kinetic – Ennay is flung about by the god as he shapes and moulds its skin. Goonface draws the onlooking Bogg as sort of voyeuristic – watching with a mix of intrigue and disgust as he tells Ennay what to do. It’s a great contrast of the two classes of people in this book – the hard workers who take on the grizzly jobs with little to no acknowledgement, and the fat cats that reap the rewards in the foreground.

What I really love here is how surreal the fantastical elements are in comparison to the crowded lived in settings. Every now and then, Goonface draws a panel that features one of these scenes – for instance, Smudge’s god losing its power. It occurs amidst their conversation during the crowded bar scene, yet stands completely isolated on its own as Smudge kneels, holding her god in a moment of desperation as his power spirals and arcs out of him. It’s a great way to contrast the fantasy from the mundane, and gives moments like these a great boost.

One problem I have with Goonface’s art, however, is that it can be a little inconsistent. This is unfortunately at its worst with his rendition of Ennay. The Ennay that introduces himself on the fourth page with the charm of a local peddler looks like a different person to the Ennay who only a few pages later, rolls up his sleeves to wrestle Bogg’s god. It works better when the contrast is between Ennay’s public and private personality, especially as he flies adorned with kick-ass make up and a lute through a packed-out club. But it’s just breaks the immersion a little to have these inconsistencies so blatant that it’s shell-shocking.

It’s worth noting that Goonface manages to handle colors on top of his art duties, and his palette is perfectly suited for this fantasy/alternate reality world. The colors pop in every scene, not only for aesthetic but also to denote mood. One subtle use of this is when Smudge talks to Ennay about her backstory. The scene flashes back from the club atmosphere to Smudge crumpled on the ground attacked by men and dogs alike. The color shifts from a mellow purple to an uneasy green, which really compliments the dialogue alongside it: ‘War. Sucks in any world.’ On a surface level as well, it’s clever how the gods contrast the muted backgrounds with vibrant color schemes. Generally, they also reflect the mood and personality of the person they’re attached to – Bogg’s new god is a proud, aggressive yellow while the god hanging around Ennay is a placid, hopeful blue.

Overall, “Godshaper” #1 sets up an intriguing and beautifully layered world. The characters are dynamic and interesting, and the setting works instead of alienating the reader. It slips a few times from inconsistencies in both art and writing, but they don’t do much to harm the story quality. If you’re looking for the next big fantasy to invest yourself in, Spurrier and Goonface’s “Godshaper” looks to be worthy of your time.

Final Verdict: 7.8 – “Godshaper” is a solid debut that introduces us to a vast alternate world with great art and visual storytelling.