With his complicated and intricate cartooning style, James Stokoe brought pure gravitas and spectacle to the 2012 miniseries, “Godzilla: The Half Century War.” Now, he returns to the Toho world to send that big lug to the pits of despair in the inaugural issue of IDW’s “Godzilla in Hell.” Does Stokoe have anything more to say about the character, or is he just comfortably treading in familiar territory? 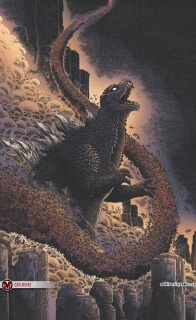 Written and Illustrated by James Stokoe
Godzilla meets his greatest adversary of all time-the impossible tortures of Hell! Each issue of this special miniseries will see Godzilla enter a new level of the underworld to do battle with the impossible.

More than anything, you’re going to grab “Godzilla in Hell” #1 for James Stokoe’s art. Insane and intricate, yet nevertheless animated, Stokoe stuffs his page with details. His rendition of Hell is simultaneously empty and claustrophobic. Enormous, insurmountable rock formations with red eyes rise up in the distance, surrounded by an endless stretch of barren land that implies empty hopelessness, only opening to an occasional pit or ominous factory. Stokoe doesn’t use solid blacks, preferring instead a scratchy crosshatching technique, so it never feels like there’s an escape from this setting. He colors with muted orange and red gradients, almost as if he’s teasing our expectations of Hell, but never letting the location become vibrant or lively. It approaches that feeling of overwhelming isolation that Alfonso Cuaron evoked in Gravity and it speaks of Stokoe’s skills as a cartoonist to be able to deliver such a conflicting atmosphere and still let it feel eerie and unsettling.

Often, and best, used as an unstoppable force of nature, Godzilla isn’t really strong enough to carry a story on his own (and many of the Godzilla stories with him as the ipso facto protagonist often fall flat, and we’re only rooting for him because his name is in the title). Since they made it through that other series together, Stokoe has this confidence and assurance with the world’s most famous kaiju, and he’s actually able to use the creature as a fun way to explore this nether realm. There’s this practically existential beat as Godzilla wanders through the Lust circle of Hell and encounters tentacle demons, a wave of souls (from the places he’s demolished maybe?), and even this anti-Godzilla.

This is a book with little words, driven mostly by its illustrations. Our only face to empathize with is Gojira’s, and Stokoe captures every bit of anger, irritation, and fear. He keeps Gojira on constant guard, ready for attack at any moment, defensive. After a lifetime of battling other monsters, Gojira knows not to stomp into any given situation.

As a writer, Stokoe never struck me as one who likes to map his narrative out before he launches into it. His stories often are crazy and fun, but the scripts never come off as tightly as the artwork. He approaches “Godzilla in Hell” #1 with a sort of episodic structure, letting Godzilla wander through the circle and encounter three obstacles and we, as readers, are left to sort of form our own questions. (What is Gojira even doing down here? Does he have, like, an eternal soul or something? Is Hell just an empty place that you could fall through?) This, though, allows him to truly kill it in the artwork. Panels expand and compress down the page; double page spreads make you take a step back. Sure, it feels like Stokoe makes it up as he goes and the script exists only to move us to another setpiece, but his delivery is impeccable and his handling of the radioactive lizard engaging.

“Godzilla in Hell” #1 kicks off IDW’s latest kaiju series and each issue will supposedly feature a different creative team handling Gojira’s journey into the underworld. It’s bombastic and entertaining, exploding with memorable imagery and clever staging. Stokoe has set the bar high for the rest of this series.

Final Verdict: 8.5 – “Godzilla in Hell” accomplishes so much without have to say a single word.