The Biblical story of Goliath is usually understood as an underdog’s tale, with David, of course, acting the underdog. He doesn’t have brute strength on his side, but he has God, and he’s all set. Flipped around, though – run through “Moon Cop” creator Tom Gauld’s disarmingly minimal aesthetic – this Drawn & Quarterly publication is something different, a quiet nightmare about workplace politics. 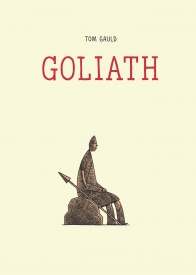 Written and illustrated by Tom Gauld

Goliath of Gath isn’t much of a fighter. Given half a choice, he’d pick admin work over patrolling in a heartbeat, to say nothing of his distaste for engaging in combat. Nonetheless, at the behest of the king, he finds himself issuing a twice-daily challenge to the Israelites: “Choose a man. Let him come to me that we may fight. If he be able to kill me, then we shall be your servants. But if I kill him, then you shall be our servants.”

From one of Britain’s most popular cartoonists, Goliath displays a sensitive wit, a bold line, and a traditional narrative reworked, remade, and revolutionized.

As a short person – and one of the only short people in a family of giants – I’m fascinated by tallness. I know it’s lame and reductive. But the second you clear 6’3” I am just made of questions. How do people treat you? What’s it like to look down on everybody, everywhere? Has anyone ever asked you to be a bouncer at their club?

I never ask these questions aloud, because I’m not an asshole, but they’re there, and they may have informed my decision to take on “Goliath” as a review. They also make me complicit in Goliath’s demise.

In Tom Gauld’s vision of the Biblical tale, Goliath is a quiet tall guy. He works in admin. It’s a nearby patrolman who seizes on Goliath as the most imposing figure around; and, with his own promotion in mind, sets Goliath up as the challenger to the Israelites. Goliath only reluctantly agrees. Like most workplace requests, it’s not so much a request as an order.

The landscape is desolate, sepia-toned. Goliath waits every day in a spot with a view of some piled-up rocks – apparently where the enemy is hiding. And if it’s plot you’re worried about – and we all know how this story ends – that’s pretty much it. It’s the stilted dialogue and the understated art that sets this piece apart, driving home not so much a moral as an oppressive feeling.

Gauld uses squarish panels and a straightforward storytelling style, having the simplified characters and the textured landscape do the heavy lifting. Although even the texturing is simplified – hatching upon hatching, darkening the contours of rocks or implying some haze in the air.

Goliath’s oval face and patchy beard don’t give us much, except that he’s not thrilled by his assignment. His shield-bearer, a boy, is even flatter, usually mouthless. He has no end of tall-person questions for Goliath — “Did you punch a camel and kill it?” — and it’s at this point that we get a bit of a furrowed brow from the tall guy.

The landscape, in all its simplicity, still manages to surprise, with the weather offering a point of variation. Smooth fog shapes shroud the end of the book, coming right after some bold, unforked lightning.

The crispness of the aesthetic, far from minimizing the impact of the book, makes it punchy – the cardboard-toned pages are lovely to look at, and they give a spacious, hopeless feeling. Goliath’s plodding, reluctant journey through the book takes on a feeling of inevitability as well as a vaguely Monty Python-esque existential dread.

The bits and pieces of dialogue take it all further, emphasizing Goliath’s apartness and the conventionality of his colleagues. In this department, our clues to Goliath’s personality come in the first few pages, where he gives his preference for admin, and takes an odd, prophetic interest in a stone.

The man who fits his armour, meanwhile, makes the dumb tall-guy joke you’d expect – “I should have brought a ladder, haha.” And in the middle of it all, there’s a delightful example of a protracted meeting with a superior that could have been an e-mail. Or, um, a scroll. A tablet?

The workplace feeling of this story comes through strongest when it’s clear that Goliath is only a proxy for the ambitions – and the brutality – of the people around him. And it’s here, of course, that the story is saddest. What part of tallness makes Goliath a warrior? Why not let him do his thing in admin? And why can’t anybody, for a second, put themselves in Goliath’s place – and if they have to use him, use him for the skills he does have?

All right, so “Goliath” isn’t an uplifting read. You might not want to get it for your tall friend who was just promoted. (I don’t know; I don’t know your life.) But it’s a striking example of what can be done with even the most worked-over of source materials, and it’s a visually charming journey that’s hard to forget.

If you cast your mind back to 2013, we lived in a world where hardly anyone knew the Guardians of the Galaxy. Hardly anyone was “Hooked on a Feeling,” but that didn’t worry Feige and co.. Not resting on their laurels following their record-breaking box office success that saw the Avengers assemble for the first […]

Merge actual, physical hearts with a hefty emotional one in the extant arc of Stjepan Sejic’s “Death Vigil!”Written, Illustrated, Colored, and Lettered by Stjepan SejicGifted? Join the Death Vigil in their ongoing war against the ever-growing power of the Primordial Enemy! The only catch is you have to die first. Become a corporeal immortal Death […]

“Blue is the Warmest Color”

Ten years after its publication, Julie Maroh’s “Blue is the Warmest Color” (“Le bleu est une couleur chaude,” lit. “Blue is a warm color”) remains a poignant and moving love story that’s been overshadowed by a controversial film adaptation. Be aware that there will be spoilers, even if you have seen the film version.Written with […]