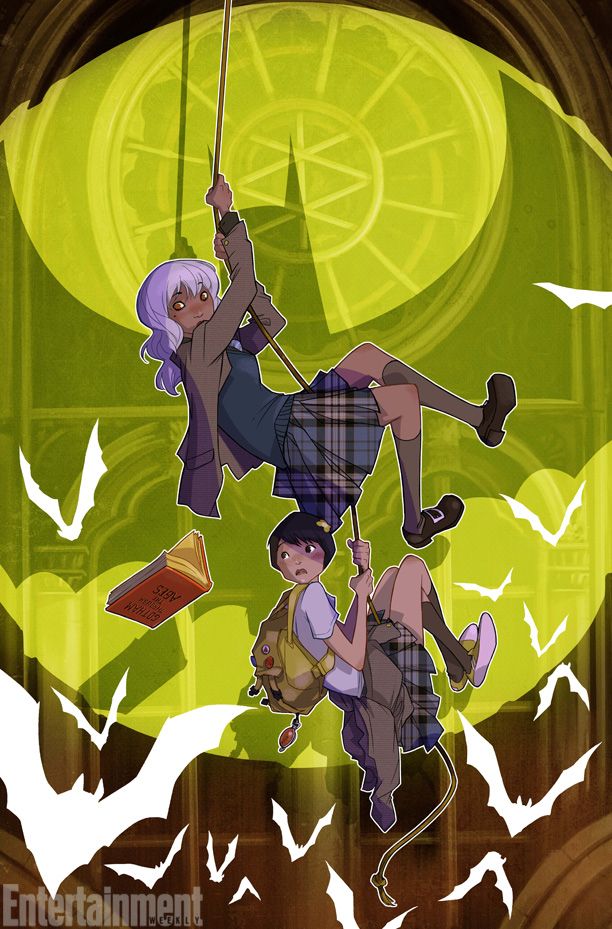 “Gotham Academy” #1 isn’t just DC’s most anticipated debut of 2014 for me (sorry “The Multiversity”!), it’s the start of a hugely important month for the publisher, with several major titles launching and one big book getting a new direction. So how does this book start the month out? Does it live up to the immense expectations readers have for it? 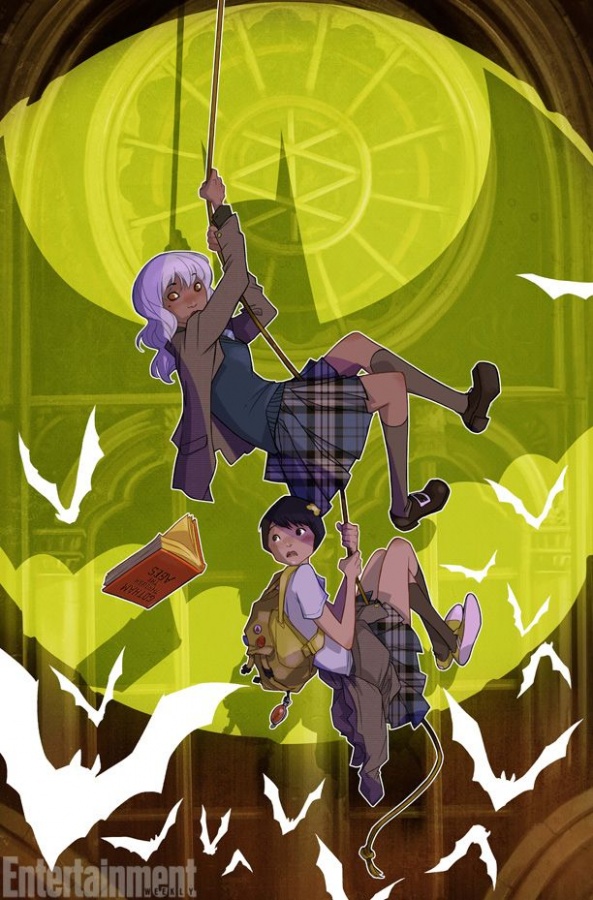 WELCOME TO GOTHAM ACADEMY! Gotham City’s most prestigious prep school is a very weird place. It’s got a spooky campus, oddball teachers, and rich benefactors always dropping by…like that weirdo Bruce Wayne. But nothing is as strange is the students!

With the sheer amount of debuts that arrive on a weekly basis in comics these days – Multiversity will be looking at nine such titles in full-length reviews this week – I often think about what it takes to create a successful first issue. It’s hugely important to comic creators and storytellers of all varieties to start strong, as you only get one chance at a first impression, and if you don’t impress, you might not be long for this world.

In the first issue of a comic series, I look for the book to introduce me to the world and its characters in an effective and entertaining fashion, and to give me a good idea of what it is the book is all about. Of course I want it to be a good comic, with art that conveys the story well while being attractive to the eye. But a big thing that many debuts miss is the hook. That one thing that makes you say, “I need the next issue”, or if it works really well, “I need the next issue RIGHT NOW.” It’s a hugely important characteristic that can make or break a book, yet sometimes sadly is missing.

“Gotham Academy” #1 doesn’t have that one hook.

That’s only because every single page and element is a hook, each one sinking deeper into you than the last. By the time it closes, you realize that the only thing crueler than your inability to have lunches as good as they have at the Academy on Brunch Day is that you can’t have the second issue as soon as you finish reading it.

The first and maybe greatest attribute I’ll talk about with this comic is the art. Karl Kerschl is someone I’ve always greatly appreciated – his Eisner winning webcomic “The Abominable Charles Christopher” has long been a favorite of mine – but what he accomplishes in this book with colorists Geyser and Dave McCaig is something I’ve never really seen perfected so well in comics. The art of “Gotham Academy” has a look and feel that’s more similar to cel shaded video games like the old Dreamcast game “Jet Set Radio” or certain animated films and TV shows, and it gives the art a level of depth and texture that makes the story resonate more deeply for me as a reader, while giving the book an aesthetic that is truly unique amidst its peers.

Comics may be a two dimensional medium, but the art team uses this method to give the book’s characters and environments a more fully realized feel, and that makes both small character moments and big action ones even more impactful. 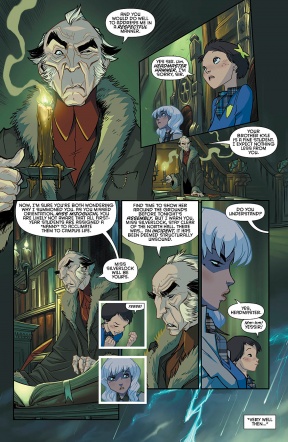 Kerschl’s storytelling is absolutely brilliant too. His page design is exceptional, and the way he uses inset and circular panels to pace the story and zoom in on details doesn’t just tell the story, it helps define our relationship with it. The real highlight though is in how he uses panels to create interaction between multiple elements, like the diagonal rectangle panel on the fourth page you can see on the right. That gives us a real time reaction from Maps and Olive as fear is struck into their hearts by the just arrived Headmaster Hammer. Kerschl may not have invented delivering a story in such a way, but his execution of elements like that is comic book storytelling at its finest.Continued below

This is all not to say that co-writers Becky Cloonan and Brenden Fletcher are the undercard to the art team’s headline performance. This is a book that feels greater than the sum of its parts because of how seamlessly they all work together, and Cloonan and Fletcher’s script is hugely inviting and engaging. Their ability to make us adore the lost but good soul of Olive Silverlock and unrestrained enthusiasm of Maps Mizoguchi is paramount to the success of the book, and in the process, they build real depth to these characters in just one issue without hammering us with it.

Olive clearly has a complicated relationship with Gotham, Batman and Bruce Wayne, and her familial relationships seem likely to be a big reason why. Is any of that overtly said? No, not at all. But Cloonan and Fletcher deliver the story and character interactions with real nuance, intriguing us enormously in the process. Not all is as it seems with any of these characters or their current home, but the way they tell the story doesn’t wither our desire to find out why that is, instead putting gas on our curiosity fire.

Kerschl excels with his character work as well, and in moments like a quiet one when Olive offers to take Maps on a tour of the old chapel on the school grounds instead of going to their assembly, he sells the scene perfectly with subtle expressions and small, warm smiles.

More than anything, the whole team partners to make this a look at Gotham that isn’t just good, but fun. Whether it’s ghost hunting in the Belfry or sensational rescue missions, this is a book that can’t help but make you smile, and that’s something I actively look for from my comic reading experience. That’s not to say that this book is a laugh a minute, as series lead Olive is going through a tough time, where it’s clear her brooding goes beyond typical teenaged drama and into real personal tragedy. But Cloonan, Fletcher and Kerschl deliver a story that achieves that perfect alchemy of comics; that blend and balance of elements that creates a story truly worth telling.

“Gotham Academy” #1 might be the single most enjoyable comic I’ve read in 2014. It’s an absolutely gorgeous and unique adventure, and an adventure that can and should be enjoyed by everyone. It doesn’t matter who you are – a first time reader, a long time reader, a man, a woman, young, old, whatever – Becky Cloonan, Brenden Fletcher and Karl Kerschl’s “Gotham Academy” #1 probably has something for you to love in its pages.

Final Verdict: 9.5 – a very legitimate contender for my favorite comic of the year