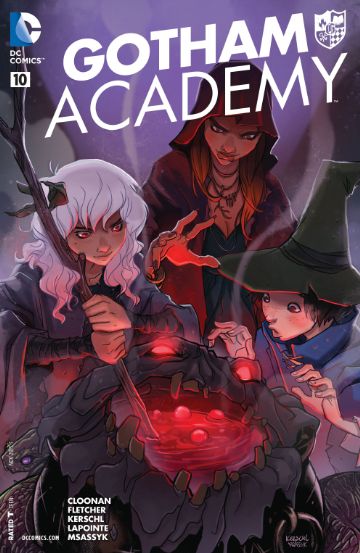 It’s more that just the return of Calamity that the Mystery Club have to deal with as Good and Evil face off in a Shakespeare Duel (Yes, I said that). 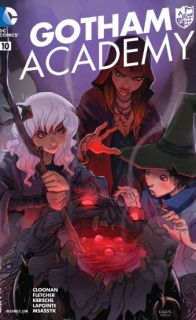 “Bubble, bubble, toil and trouble!” To investigate a suspicious student, Olive and the gang join the school production of Macbeth! But is the play haunted?

Note: There will be some minor spoilers to the issue here.

Cloonan, Fletcher and Kerschl are nerds and I love it.

They are not afraid to wear the influences of this book on their sleeves. Whether it is the open fondness of Billy Shakespeare or their love of Batman: The Animated Series (one episode in particular, but I won’t give the title because it would spoil the twist of this issue) or the feel and tone of Harry Potter in its sense of adventure, “Gotham Academy” is one of the most confident books at DC. But it was none of these that I fully thought of when I completed the issue. What I thought of the most was the manga Soul Eater. Why?

Because Katherine, a character that takes a more prominent role in this issue, is so much like Chrona I was waiting for her to squawk “I don’t know how to deal with this!” The gloomy looks, the being ignored, the incredibly screwed up relationship with a certain character (won’t say who because like the above, would immediately spoil the twist) all reminded me of one of the most depressing characters in all of anime and manga that you just want to wrap up in a blanket and say “it’s okay”. And I mean this all in a good way, I thought she was a well-done addition to the cast.

But of course, that’s not all with this issue. What I also enjoyed about this issue was that it put the overlying arc dealing with Olive’s mother to the background and allowed for a done-in-one story that is still tied into the bigger picture. In this case, the potential haunting of the Academy’s rendition of “Macbeth”, directed by thespian Simon Trent (eagle-eyed fans knowing him as the Grey Ghost. Again, the creators of this book are colossal nerds). The inevitable revelation here is well thought out and has been cleverly seeded over the previous nine issues, which just makes me want to go back over and re-read them.

While we do get some development on Calamity and Olive (in particular a scene with her and her therapist), the ones that get the really good scenes in this issue are Maps, Colton and Katherine. The duo of Maps and Colton continue to show their investigative and scientific prowess and it did make me smirk to see Colton lampshade how ridiculous the premise is. It are these character moments that I enjoy the most, which kind of makes me all the more happy to know that the major arc involving Calamity will be ending by years end. I do like that plot and Olive, but it is nice to see the other characters take the spotlight.

Yes. A Shakespeare Off. It is at once hilarious, awesome and incredibly head-tilting. When reading it, your mind is going “What did I just read?!” followed by “Oh wow this is great!” It’s a true laugh out loud moment.

A majority of why such a whacky premise works so well is Kershcl’s (with assist from Massyk) skill with character expression. Characters like Trent and the villain of this issue are beyond over the top and as such require not only facial movements and body language to go alongside it. They are also able to show heartbreak as well when Maps learns that Olive had told Pomeline about Calamity before her. I never want to see Maps make the sad face she did in this issue ever again, you monsters.

The colorists, Serge Lapointe and Massyk as well, are a massive boon to this issue as well. Being that it is Shakespeare and theatrics being a big component in this issue, the lighting and “pop” in the color schemes during the dress rehearsal and the aforementioned Shakespeare Off. It manages to be as overly dramatic as needed without losing the more moody and sometimes eerie color style that has become synonymous with the book.

I talked about “Gotham Academy” in our Comics Should Be Cheap column earlier this week when I declared the book DC’s best Young Adult book and I meant it. The big reason behind that is it remembers that its protagonists are teenagers unlike certain other books (*cough*TeenTitans*cough*). Perhaps it benefits from none of the characters being superheroes and being only semi-connected to the Batman universe? Maybe. But we talk about certain books in terms of how “important” they are, whether it’s in the context of the greater DC universe or in terms of greater social representation. And while it very much falls into the later category, I would make the further argument that it’s important because it has a variety in the cast that feel like people.

Final Verdict: 8.0- An over-the-top one-shot that you will love.