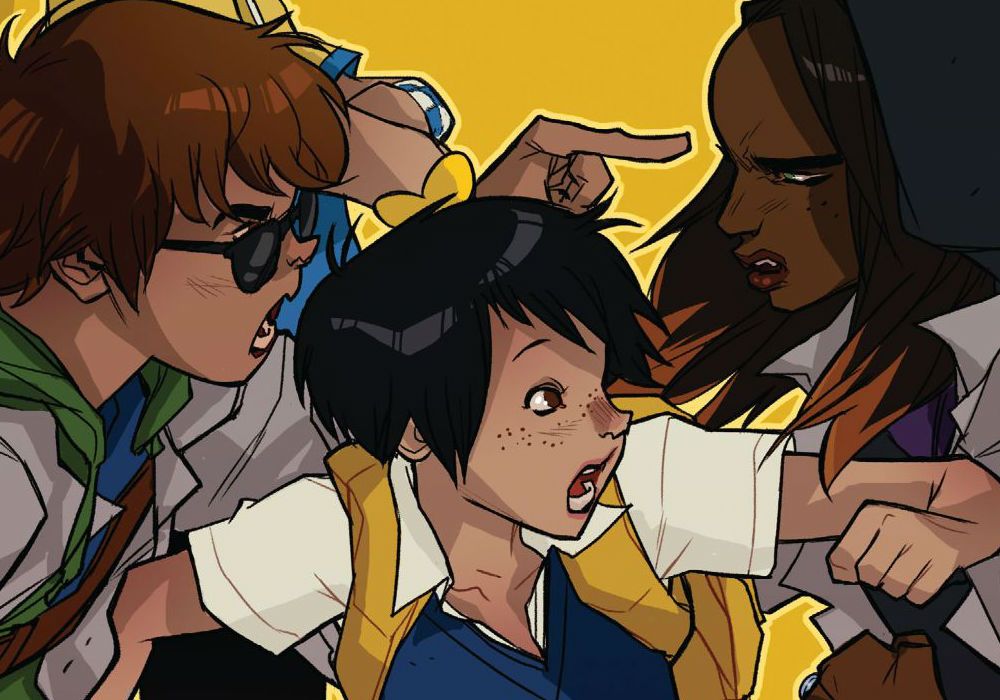 A mysterious illness at the school, creatures from the past and future and volatile personalities all collide as the Pizza Club have another case at their mysterious school. How does it go? Let’s find out in our mildly spoiler-filled review. 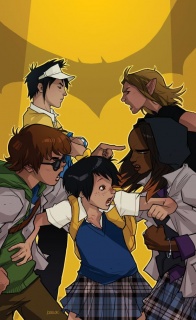 When the Gotham Academy student body comes down with a mysterious disease, Pomeline and Colton disagree on the origin of the threat, causing a fissure in Detective Club! The team fractures to get to the bottom of the case…but who will solve it first? Will Maps be able to reunite her friends? Will they ever eat pizza together again?! Join the search for clues in the first ever Gotham Academy Annual, precursor to Gotham Academy: Second Semester!

As I have discussed before, the last several months of Gotham Academy material has been rather lacking for me. Three issues into the “Lumberjanes/Gotham Academy” crossover, I have found it to be in that hard to categorize realm of “just fine”. Whereas the last arc, “Yearbook” had some good moments but, like any anthology, was mixed in its quality and kept giving me the impression of a creative team and a company that was shuffling its feet a bit with the upcoming “Rebirth” initiative. Yeah, we had new “Gotham Academy” it just didn’t fully feel like it.

With that said, this felt like a major return to form. This is a story that actually has very little to do with Olive Silverlock, which I feel like is a good thing. Her story with her mother dominated the first year of the title, so seeing the rest of the Pizza Club take center stage for this was a real good treat. If there were any two characters that were the “main” characters, then it’s Pomeline Fritch and Colton Rivera. When a new mystery is at hand involving both a mysterious illness plaguing the school (including Olive) and a mysterious unknown person escaping from a lightning-struck tower, the Pizza Club is struck down the middle as to what the answer to these mysteries are. Pomeline’s solution is of course based in supernatural whereas Colton’s is more grounded and scientific. It isn’t long before the group is in its own civil war, with Tristan going off with Pomeline and Colton taking Kyle.

This is where we’re going to have to take a bit of a discussion: Throughout Gotham Academy it has been very implied that Colton has a mad crush on Kyle and Pomeline is aware of that fact. Well, it’s here that the subtext has gotten very text-ey. Like, only the most blind and homophobic couldn’t see it at this point. And there are some… let’s just call them what they are, taunts, Pomeline makes towards Colton about this. And yeah, they are kind of problematic. I am -as of right now- kind of okay with them and here’s why: Pomeline is an asshole. I like her as a character but I would never actually hang out with her in real life. And the reason I am somewhat okay (if uncomfortable) with this is because it can set up an arc for her, like Colton is being set up for an arc. An arc where she’s called out on her shit and showing the reader that her behavior is not okay. Basically, if this isn’t addressed in “Second Semester” then I’ll retroactively condemn this scene more. It could be a real good story, but now I’m just going on “what could be”’s.

On the other hand, I kind of appreciate when Kyle inquires to Colton on how strange he’s acting and Colton’s all flustered. It’s just presented like a normal crush. There’s a great feeling -for me- in presenting queerness as “Oh okay. It’s normal.”. And this of course is coming from someone who has crushed on other guys in High School and College and seeing this as just part of the narrative -with no need for soapbox and such- is refreshing.

Because it’s Cloonan and Fletcher back together again, of course there are a load of Bat-in jokes and nods, not only to a well regarded segment of the Batman animated history but to one of the most obscure Batman villains in his entire history. Seriously, I thought some of there other references were uncommon, but this one takes the cake! I also have to appreciate how seamlessly the variety of plots here are sewn together as well as into the overall continuity of the seriesl. Go back and read issue #1. There is a panel there that completely foreshadows how the antagonist is defeated here. It’s a clever and subtle nod and gives a sense of book-ending this part of the overall story.

The art duties here are split in a very interesting way. One would think that each of the three art teams would handle a third of the book, but that’s not what happens. Instead, the art is split in accordance to the characters we are following at the time. Adam Archer and inker/colorist Msassyk handle the parts featuring the Pizza Club as a whole but after the split of the group, Wildgoose and colorist Serge Lapointe follow Colton/Kyle where Michael Dialynas follows Pomeline/Tristan. One would think their styles would clash more (especially Wildgoose’s more sharper characters with Dialynas’s more intentionally rougher looking artwork) but they do manage to pull it off. It helps that those two were some of the more noteworthy artists during “Yearbook”.

I have to make a particular note with Adam Archer, since he’s going to be the ongoing artist once “Second Semester” starts. I had to admit that his art in “Yearbook” was not hitting me and it was when this I realized why. In “Yearbook”, he was coloring himself but here Msassyk took on the role and to the massive benefit for the book. Color is incredibly important in “Gotham Academy”, more so than a lot of other books because I can’t think of this particular style in any Big 2 book (heck, even a great deal of indie books as well). It’s a very hard color style to describe. There’s a softness to it without making the art look soft. And there is this contrast of light and dark that’s very unique because it’s not typical dark and light. It’s like sunlight peering into the windows of a dim classroom, it gives a sense of history to the Academy. Seeing that here, and with the knowledge that Msassyk will be on “Second Semester” opened me up a lot to Archer’s pencils.

At the end of this, the big takeaway you (and to be frank, the creative team) should have from this is that this series doesn’t have to rely on Olive (and, to a lesser extent, Maps). This book shows that these characters do have stories to be told. Colton and Pomeline have potential for incredibly important arcs here. Kyle and Tristan have been scoffed as just being eye candy, but we even get little tastes here of things going on under the surfaces that I really am hoping Cloonan, Fletcher and Karl Kerschl take advantage of. The first few solicits make it seem like the first couple issues of “Second Semester” will be Olive/Maps-focused and I really hope that doesn’t happen in the long-term. I am so on board and this issue was a great return to form, I just want to see more expansion and growth.

Final Verdict: 8.3 – A fun mystery showcases the potential of the Pizza Club members as individuals.