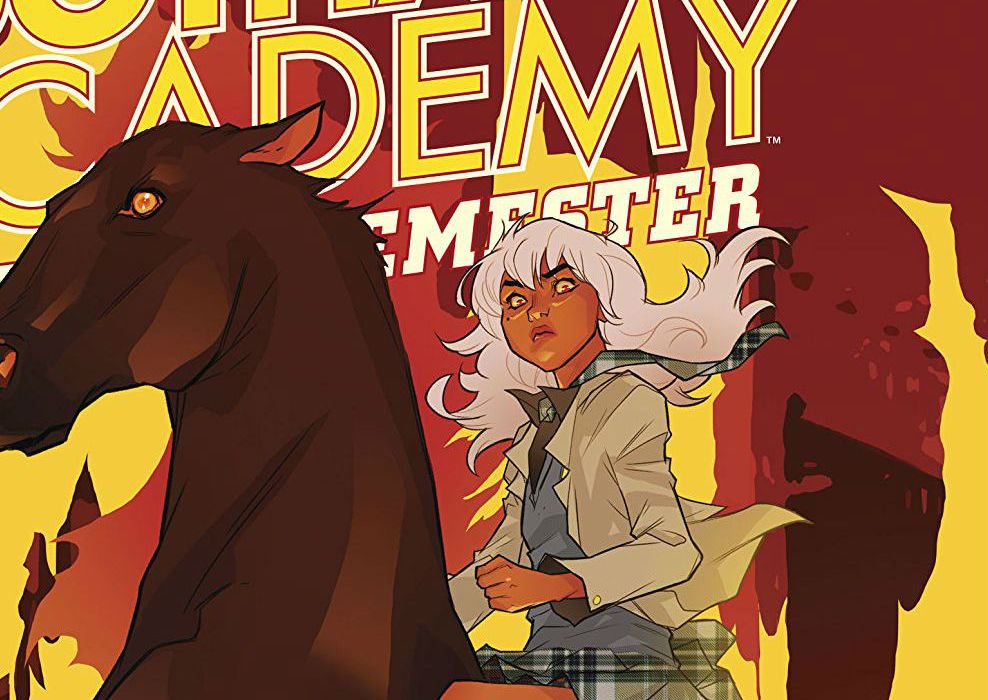 Gotham Academy’s Detective Club receives a devastating blow in the closing out issue of “Second Semester”’s penultimate arc. The tale of Olive Silverlock, her family’s history and how it ties in with the school and her friends is coming at a breakneck speed. Let’s check it out. 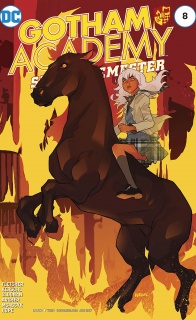 In an epic climax to this storyline, Olive faces her true destiny as the fate of Gotham Academy hangs in the balance. Will her friends be able to reach her in time…or will the Academy be lost forever?!

So, as you may have heard, the bells are ringing for “Gotham Academy: Second Semester”. The upcoming arc, The Ballad of Olive Silverlock (#9-12) will be the final arc of a series that lasted a lot longer than I think many of us expected. Thirty issues, annuals, specials, a mini-series. Quite impressive for a series that utter fools said there’s no market for. But we still got time with these characters left, as secrets of the Silverlock family reach the surface and is going to leave the Detective Club irrevocably changed.

First things first, I wanted to talk about an overall plot point this arc: Amy. And the reveal that Amy was not Olive’s new roommate and was a figment of Olive’s imagination this whole time and a further exasperation of Calamity. Now, I want to say this about the reveal: the writing team telegraphed it a good deal throughout the arc and it wasn’t a surprise when the reveal happened. That’s not a bad thing. Why am I talking about this? Well, I have to compare it with the recently concluded “Superman Reborn” storyline over in “Superman” and “Action Comics”. Where the setup of this “Fake” Clark Kent made it seem really apparent that it was actually Superboy Prime. That was not the case, and the true identity, Mr. Mxyzkptlk, felt like an out-of-nowhere cop out. My point is: Just because a twist is predicted doesn’t make it bad, and the twist here wasn’t.

This issue follows up on that twist as Calamity comes back in near full force in this issue. Mental illness, and in particular hereditary mental illness, has been a prevalent theme in the form of Calamity and it’s back here in full force. We see a look into the history of how Calamity came to be and bringing up the history of persecution that people would experience, in this particular case, the witch hunts. History ties the Silverlocks, the Arkhams and the Fritchs, Pomeline’s family, together for a conclusion that leaves you really feeling for Olive.

That being said, for all the plot and history being filled in with this issue, it’s all about the character interactions and bonds that hold this group together. The bond between Olive and Kyle, Maps and Olive, Olive and Pomeline, Pomeline and Colton and so many more. Even Katherine Karlo (who feels like she’s become an unofficial member of the Detective Club) gets a great moment to shine and help people who have brought her into their little weird family. It’s those bonds of friendship, keeping each other’s heads above the water, that has always been the best parts of this series and seeing those bonds pulled to the near-breaking point here is heartbreaking.

Now I have to talk about the incredibly weak part of this issue, and this arc: Professor Scarlett. Listen, I know that Bookworm was a villain from the Adam West Batman series and if Cloonan/Fletcher/Kerschl have shown anything it’s that they are incredibly massive nerds for obscure Batman and characters from other media and they’ve shown it throughout “Gotham Academy”. Killer Croc’s “I hit ‘em with a rock”, Blight and Warren McGinnis, and of course, Bookworm. That being said, while he had been a quirky background character, his reveal that he’s a villain here just feels kind of forced, further snapping belief when he tries to kill Pomeline and Colton. On top of that, based on what we’ve seen of Scarlett, I refuse to believe he planned all of this just to acquire Amity Arkham’s book. I started this review praising the careful foreshadowing of Amy’s true nature, but this is where I feel like the creative team fumbled.

The massive team pencilers, inkers and colorist continue to do a stellar job with this book. In this issue, we see Olive’s psyche being brought to the brink and the art had to be able to convey that and she looks positively haggard in this issue. Sometimes, I feel like artists in the Big 2 can overuse the whole “white of their eyes” sclera-only depiction of eyes (probably since a good chunk of them use domino masks) but it worked to great effect to convey Olive’s anger. Combine this with Msassyk’s great use of coloring for the flames that Olive is summoning up only further enhances the danger and tragedy happening. But it’s not just the doom-n-gloom parts the art team excelled at; Katherine’s clay form she uses to sneak around to rescue Pomeline and Colton is adorable.

I once said that I was kind of over Olive’s story and that I was hoping other characters would take a spotlight in the series but apparently I was wrong. The whole team brought the story of Calamity and the Silverlocks back to the forefront and instead of being bored by it, I’m surprisingly reinvested by it. While there were some parts that felt very aggravating in believability, the Detective Club’s bonds are what have pushed this series on longer than expected and I’m really hoping these last four issues of “Gotham Academy: Second Semester” aren’t the true end.

Final Verdict: 8.0- The penultimate arc of the series have left a lot of characters in bad places and I love it.