Writer Ray Fawkes focuses on two members of the GCPD’s midnight shift in “Gotham by Midnight Annual” #1 as they confront the phantom conundrum that is the Gentleman Ghost. Artist Christian Duce and colorist Lee Loughridge lend a simple beauty to a deliberately paced story that is both mysterious and atmospheric in its execution. 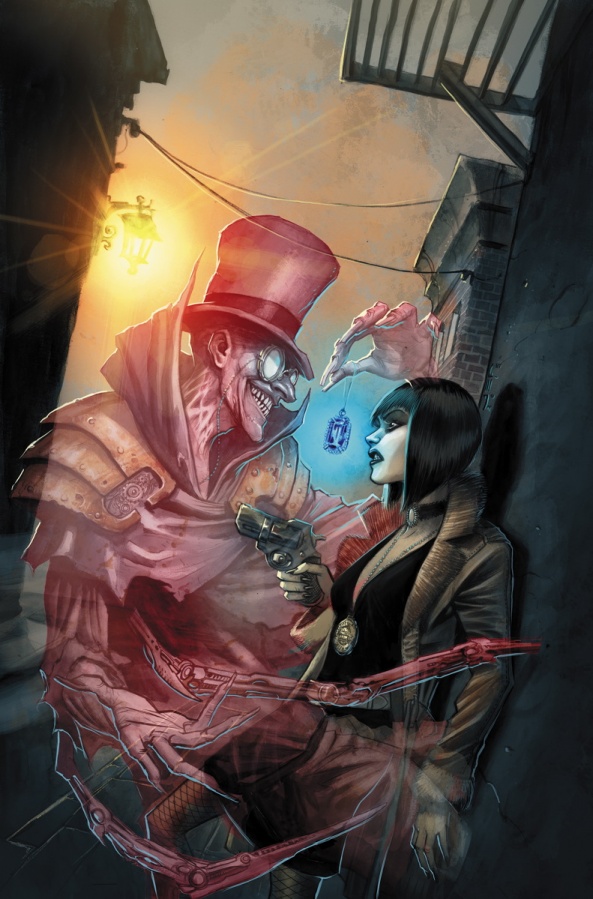 Get set for a tale of love and vengeance in this centuries-old mystery for the Midnight Shift – and the Gentlemen Ghost!

Many readers’ expectations for an annual usually include surprising revelations or qualities that differ from the main title. “Gotham by Midnight Annual” #1 may not be exciting in those particular aspects, yet it still feels like a special story. The simplicity is effective, with Ray Fawkes introducing a mystery involving the classic character of the Gentleman Ghost and a necklace bearing the awesome name of Tears of Eurydice. Plus we get an origin story of the Ghost himself. All these elements manifest into an old fashioned yarn that can be read on its own without continuity constraints while also featuring an interesting and fun character that readers would gladly welcome in other corners of the DC Universe.

Fawkes’ wit, snappy dialogue, and natural pacing appear effortless from page one until the satisfying and open-ended conclusion. Detectives Jim Corrigan (a.k.a. the Spectre) and Lisa Drake are the only two members of the midnight shift who are spotlighted in the annual. In two scenes where both interact separately with the Gentleman Ghost, Fawkes demonstrates nuance in his writing. Sly seduction, quick-witted dialogue reminiscent of classic Hollywood films, and character ambiguity all combine to produce a fun reading experience. Like the monthly “Gotham by Midnight”, Fawkes is able to bring his horror expertise to excellent use. The stakes, however, are lower and the plot is less grand and is instead more personal because it focuses on just three individuals. Fawkes is regaling us with an old-time ghost story instead of writing a terrifying tale.

Artist Christian Duce is an appropriate choice for the annual’s story. The simplicity of his art melds wonderfully with Fawkes’ script. The intense facial expressions and tight close-ups add suspense and character work that bring much more depth to a straightforward story that would be stale in a lesser artist’s hands. During the conversation between Corrigan and the Gentleman Ghost, the squint of Corrigan’s eyes imply what words cannot convey. Most importantly, Duce generates complexity in his interpretation of the Gentleman Ghost. One example of this is in the expression of the Ghost’s use of his sexuality. In the opening scene, it’s used in a sensual and seductive way. With two other characters, it’s used in a forceful or hypnotizing way. The deceptive simplicity of Duce’s art betrays layers of meaning and expression that evolves throughout the entirety of the annual.

Lee Loughridge’s color palette provides a preternatural air to the annual’s proceedings. The blue hues of the night sky in the book’s opening scenes contain a thick texture that appears rough and claustrophobic. Loughridge’s skills are so powerful that the reader feels compelled to touch the page (or screen) to see if any tactile sensation can be gleaned on one’s fingers. Shades of purple and pink color the night sky as two characters remain in a hospital room. Once again, the supernatural invades the color choices and brings a sense of unease. Loughridge is not only a master at setting the tone of the book, but also imparts diversity to Duce’s art.

That diversity is strikingly visible in the flashback scene that reveals the Gentleman Ghost’s origin. Black and white mixed with extremely muted hues of color transforms Duce’s style of art into something unrecognizable from the rest of the book. Loughridge’s coloring brings a crispness and realism to the nineteenth century scenes that is absent in Duce’s other pages. The importance of a colorist’s skills cannot be stressed enough. Loughridge, like all great colorists, is an integral component of a comic book’s success as a piece of art. These scenes show just how important his skills are to the success of the book.

The only complaint I have about “Gotham by Midnight Annual” #1 is the brevity of the book despite its extra length. Fawkes’ story is intriguing enough, yet it is the art and colors that transform this annual into a pleasure. Duce brings Fawkes’ mystery to life while Loughridge’s colors are dripping with atmosphere and unease. This annual is unlike much of what has transpired in the “Gotham by Midnight” series and only demonstrates the diversity of these characters and the various types of tales that can be written around them in the future.

Final Verdict: 8.0 – “Gotham by Midnight Annual” #1 is a break from the fast-paced bombast of the series and is a ghost story that only leaves us pining for more tales featuring the suave Gentleman Ghost.