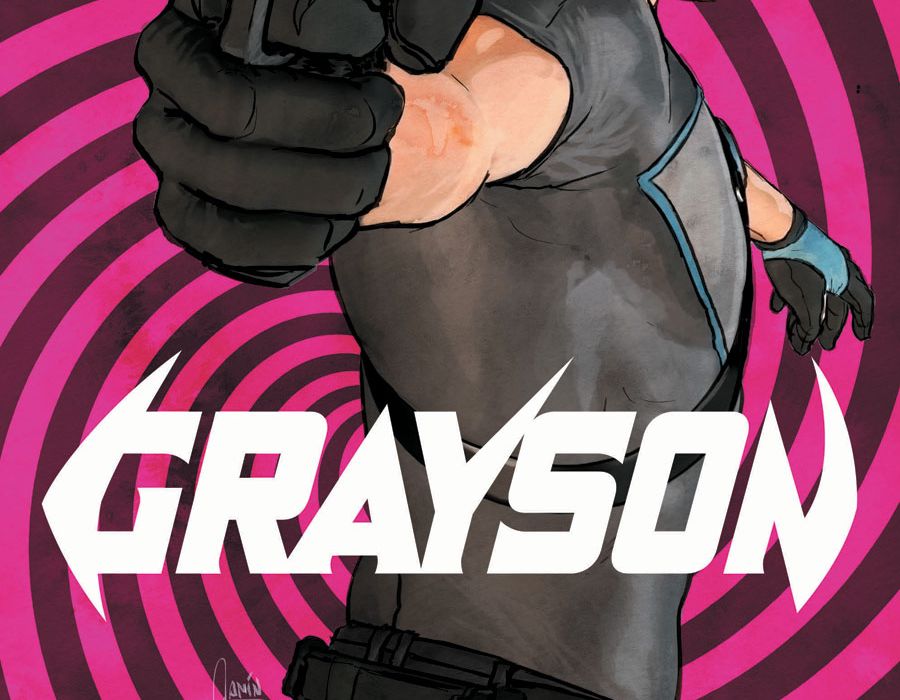 With “Rebirth” well under way, it’s time for Dick Grayson to tie up some loose ends on his espionage career. But how will Grayson reflect on the last few years of his heroic career? Read our review below to find out. 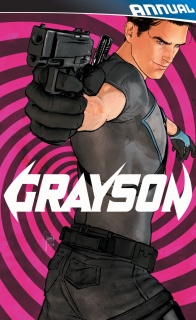 Determined to find out the identity of Spyral’s Agent 37, detective Jim Corrigan gathers a collection of heroes who have seen the swirl-faced spy in order to hear their accounts. With guest appearances by Harley Quinn, Azrael, John Constantine and Green Lantern Simon Baz, get ready for some of Dick Grayson’s greatest hits!

“Grayson” was kind of a game changer wasn’t it? I mean sure, we’ve always loved ourselves some Dick, the first Robin taking over for Batman during Grant Morrison’s run is one of the things that got me into comics, but he kind of lost his footing when The New 52 came out. He wasn’t Batman anymore but he wasn’t exactly the Nightwing of old either. It’s not that “Nightwing” is a bad character to be, but it still feels a bit like a downgrade once you’ve spent two years as The Caped Crusader. Things looked pretty bleak when “Forever Evil” came around and Dick Grayson ended up on the crossover chopping block when his identity was made public and he died. For like a minute. Taking a page from the Winter Soldier textbook (which isn’t a bad thing since the Robins and Winter Soldier have been borrowing from each other since Bucky came back), Dick Grayson used his public “death” to go undercover and wrap up one of the biggest loose ends from “Batman Incorporated”, the espionage organization Spiral.

Over the next few months, Tom King, Tim Seeley, and Mikel Janin established Dick Grayson as the coolest guy in the DC Universe. He got to do his own thing and stand out from Batman, got himself into some heady adventures with the likes of Midnighter and Helena Bertinelli (with whom he had the best “Future’s End” tie-in issue), and had gawk over his booty. It’s a fair observation, Mikel Janin draws a mean booty.

So with Grayson heading back to Gotham and picking up the Ol’ Black and Blue again as part of DC’s “Rebirth”, “Grayson Annual” #3 serves as a farewell to this strange sexy period of Dick Grayson’s life. As Dick Grayson’s cover became more high profile during his tenure with Spyral, regular DC characters began having more and more run-ins with the faceless spy. Spiral has these hypno things that let people hide their faces. I don’t know. Anyway, Grayson AKA Agent 37’s activities cause John Corrigan, John Constantine, Simon Baz, Azrael, and Harley Quinn to get together and share what they know about the spy with no face. It’s basically that “Almost Got ‘Im” episode of Batman: The Animated Series but 30% about Grayson’s juicy butt.

Really, the four stories serve as a reflection on the top of adventures Dick’s gone through and the type of man he’s grown into. Constantine’s story finds him meeting a near-naked Grayson as he’s being sucked to death by an English vampire and his three wife-daughters. It’s an extended way to get a in a joke about someone eating spotted dick, but really highlights Dick’s role as a charmer who can throw down the quips with Hellblazer himself. Likewise, his adventures with Baz, Azrael, and Harley Quinn highlight his facets as a superhero, savior, and gymnast. That’s not an incredibly deep analysis of this comic, it’s all right there in the titles for each chapter. Still, these vignettes, as told by people who knew Grayson back when he was Nightwing or even Robin are a kind of assessment from people in Grayson’s past viewing how he’s grown. Except for Simon Baz. Baz never met Grayson, is confused and kind of done with everything throughout the entirety of this issue, and might just now be my favorite Green Lantern.

“Grayson Annual” #3 isn’t exactly the final nail in Grayson’s coffin. There’s no big revelations or gigantic stakes to cap off Dick’s career in Spyral. Instead, this annual serves as a kind of memorial to the kind of hijinks that Dick himself up to when he joined the spy game. And with his reversion back to “Nightwing” around the corner, it’s a funny, almost sentimental look on a period in this character’s life that’s inevitably going to be cited as trivia in #4 of some Cracked.com listicle.

Final Verdict: 7.2 – A strong epilogue to a strong direction in one of DC’s best characters.