And there came a day quite similar to many others, when earth’s not so mightiest heroes were re-united through a legal loophole! On that day the Great Lakes Avengers were reborn! — To bicker, and generally make a nuisance of themselves, but to provide some great entertainment while they did it! 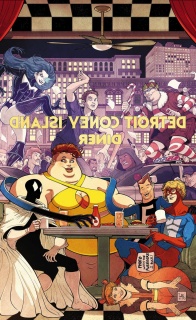 Written by Zac Gorman
Illustrated by Will Robson

“All New, All Different?” No, thank you! New things are bad and different things are scary! Instead, why not join everybody’s least favorite super-hero team, the Great Lakes Avengers in their brand new — but not too brand new — ongoing series, Same Old, Same Old, Great Lakes Avengers! When the team gets reinstated as permanent members of the Avengers and uprooted to Detroit, the GLA has one more shot at super hero glory…but can they answer the call? Do they even have 4G coverage here? Find out!

The GLA are a fantastic example of just how weird, wacky, and oftentimes unfathomably convoluted comic books can be. Made up of a group of decidedly d-list ‘heroes’, and played up as a parody both of multiple heroes and the genre itself, “Great Lakes Avengers” has always been a comic book for comic book nerds. And this newest incarnation, helmed by “Rick and Morty” and Over the Garden Wall writer Zac Gorman, and illustrated by Will Robson of “Star Lord” fame, has fully embraced the in-joke comedic elements of the original series, while managing to root the first issue in a relatably misanthropic malaise that should resonate with anyone who feels like they’ve never quite reached their full potential.

Val Ventura, AKA Flatman, is slowly sinking into comfortable irrelevance when a loophole regarding the ‘Avengers’ legal name gives the GLA alum a legitimate claim to the title once again. After hastily brokering a deal with an exasperated member of Tony Starks legal team Flatman and the Great Lakes Avengers are back in business, with a direct line to the (strictly low priority) Avengers distress calls. There’s only one problem, he’s still not actually got a team. But a series of increasingly desperate text messages eventually manages to net him back old friends Big Bertha and Doorman, as well as a couple of new and unexpected faces. The team relocate to Detroit, at the behest of The Avengers, and settle in to start fighting low level crime. But they’re not the only supers in the vicinity, so their task might not be quite as simple as they first thought.

Gorman’s comedic pedigree is on full show in this first issue, and the disillusioned, downtrodden Flatman doesn’t feel too far from the disgruntled scientist Rick, albeit far less nihilistic. Gorman’s ability to write compelling, humorous dialogue means that we quickly find ourselves attached to this group of misfits, and their relationships feel real and lived-in. Gorman’s dialogue-heavy script does mean, however, that while this issue flows quite quickly, it doesn’t really gain much ground in terms of narrative. By the final page we’ve had a few character introductions and a change of location, but nothing really concrete in terms of storyline and no clear ‘big bad’ in sight. This is by no means a bad thing, and the lackadaisical pace definitely feels like more of a conscious choice than any kid of oversight. This book isn’t in a hurry to set up any Hickman-esque world-ending trauma, but with a collection of delightfully discordant heroes like the GLA, it could be just as enjoyable to watch them bicker or self-destruct as it would be to see them save the universe.

Robson’s art feels fully realised and fits the self-aware stylings that the GLA have had since their inception. his character design is great, and the whole cast read as just the right side of cartoonish. Re-reading this issue I was surprised at quite how many characters were non-standard shapes. From the two-dimensional Flatman to the shape-shifting Big Bertha, through to the highly-muscled human torch Firebrand, there are a lot of difficult to imagine designs in this issue, but Robson manages to blend them into a street-level setting, flanked by civilians, without it seeming completely farcical.

Conversely, His work on the costumes really highlights quite how out of place superheroes would be in a more real-world setting. Fully embracing the wacky stylings of weird and wonderful characters from the eighties and nineties, Robson gets to play with Doorman’s darkforce dimensional suit, Bertha’s shrinking and extending two-piece, and some scandalously uneven boots on henchwoman Shriek. These suits are played up to absurdity, and as the issue is relatively light on action, with most of the panels much more heavily skewed towards conversation, we get a real chance to imagine just how silly some of these superpeople would look if they fashioned their costumes in real life. If you ever needed proof that not all ‘comics-accurate’ costumes need to be ported to live action heroism, this book definitely provides the ammo.

“Great Lakes Avengers” #1 is a delightfully bizarre jaunt that feels like the result of a studio with decades of ridiculous history acknowledging the hidden gold in their less-than-heavy-hitters. It’s a great superhero book that doesn’t really feel like it’s about superheroing, and that kind of narrative diversity is key for Marvel if they’re going to keep involving readers with a wide variety of interests in their world. While some of the conversational set-ups and throwaway gags might be a little too rooted in Marvel lore for the casual reader, they feel more like easter eggs than anything to hang the story on. Overall, this book reads like a fun first issue for Marvel fans and curious superhero newbies alike. I’m excited to see where it all ends up.

Final Verdict: 9.0 – My new favourite Avengers team might just be the worst version ever put to paper.