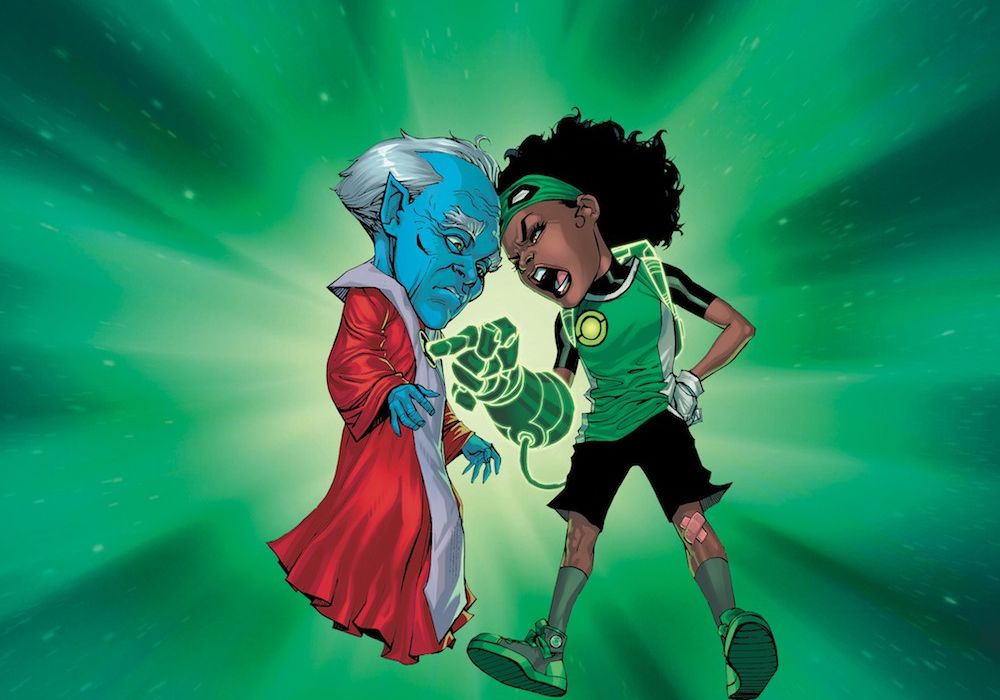 Last month, we saw what the future of the Green Lantern Corps looked like in “Future State.” Now we’re back to the present, with a new “Green Lantern” ongoing. Teen Lantern is brought to Oa, so we can see where her powers come from, but Oa itself is undergoing some big changes. How big? Let’s take a look and see. 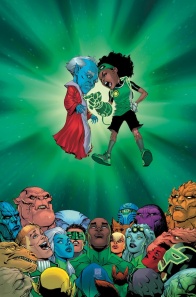 THE SOURCE OF PEACE
As this new Green Lantern series begins, the newly formed United Planets and the Guardians of the Universe hold an intergalactic summit to decide who can best serve and protect the cosmos from danger. With the majority of Green Lanterns called back to Oa, John Stewart arrives alongside Teen Lantern Keli Quintela, whose powerful gauntlet could be one of the most powerful and unstable weapons in the universe. With the entire landscape of the universe in flux, is this the end of the Green Lantern Corps…or a new beginning?

In spite of being a new #1 issue, this issue of “Green Lantern” ties into the continuity of multiple other comics. Its focus on Teen Lantern means those who missed “Young Justice” might be confused as to who this lost, sassy child may be. The formation of the United Planets might come as a surprise to those unaware of what Superboy has been up to lately, although the vote on whether or not to include Oa is a foregone conclusion to those who have read “Future State” comics like “Superman vs Imperious Lex.” There’s even discussion of the omniverse, which has recently been introduced as what can be described as a multiverse on an even grander scale (and before anyone asks, there are currently no plans for us to change the website’s name to “Omniversity”).

In short, this is tied into recent continuity pretty strongly. Yet that is to the comic’s favor. As amazing and insane as Grant Morrison’s “Green Lantern” run was, it came at the tradeoff of feeling disconnected from the DC universe, even when characters like Superman were brought in. This new run by Geoffrey Throne goes in the opposite direction, although of course, that’s not to say either is “better” or the “right” way to do a “Green Lantern” comic – it’s just two different takes on the series, and I love how we can get runs with such different takes and styles within the same title.

With continuity established, we can look at the comic itself. The story has a few plot points that are brought together nicely. We have the formation of the United Planets and the debate over Oa’s place in it, leading to the Green Lanterns acting as a security force while butting heads with the United Planets Brigade challenging them every step of the way. At the same time, John and Simon are helping Keli, AKA Teen Lantern, as the Guardians test her abilities and they try to determine how her gauntlet works. These set up key plot points we’ll get to explore as the “Green Lantern” comic continues (as long as Oa and the power battery don’t suddenly all vanish, as “Future State” indicated they will).

These plot points allow us to switch between scenes set on multiple scales, from the more character-driven moments with John and the Guardians to large set pieces with the United Planets and their debates. As there’s always a Green Lantern in the scene, we’re never without viewpoint characters to follow, which allows for better pacing even when the comic jumps back and forth. Artists Dexter Soy and Marco Santucci do a fantastic job with both styles, whether they’re focusing on the emotional states of individual characters or highlighting a wide array of alien species in debate and turmoil.

Even the voting scenes are made engaging by the dialogue Geoffrey Thorne writes for it. Sinestro’s speech, for instance, is compelling and written with all the gravitas one would expect from a man like Sinestro. It helps that the artists present this in a panel that takes nearly the full page, showing off various members of the Sinestro Corps and their snazzy new uniforms. The Sinestro Corps members we see all feature unique and interesting (but clearly intimidating) character designs, and their outfits are no longer just yellow versions of the Green Lantern outfit.

Of course, the conflict in “Green Lantern” goes beyond the political, as the issue begins in media res with a battle against a destructive force. The issue builds up to its appearance, which kicks off some tense action.

In spite of “Green Lantern” being more focused on the science fiction side of the DC universe, the threat is still one tied into magic. This helps further connect the comic to the overall universe it’s set in, as both magic and science are important elements within the DCU. So when the science fiction side focuses on a meeting of multiple planets, of course those more cemented in magic will get involved as well, and that leads to more interesting conflicts.

Now while I’ve talked about the story plenty, there’s still so much to say about the art. As mentioned, Dexter Soy and Marco Santucci share art credit for this issue, and they blow it out of the park.

From the very first page, we’re treated to excellent illustrations, showing the lanterns in battle. That quickly leads us to huge crowd scenes around Oa, filled with unique alien designs. There’s a huge amount of creativity put into the various species we see throughout this comic, whether they’re taking center stage or milling around in the background. We get the representative from New Colu, the various members of the Sinestro Corps, the elemental beings that kick off the conflict, and even a floating creature Teen Lantern describes as like “a wedding dress, but alive.”

Much credit needs to be given to their panel composition as well. Even when characters are just talking, the artists make full use of the panel sizes and angles to add to the power of each moment. We get a lot of shots viewed at an upwards angle, emphasizing the importance of the characters involved (or sometimes just indicating that they’re flying) while allowing the artists to show them off in all their detail.

Each page is packed full of visual treats, from the beauty of space to scenes filled with monitors showing the history of the universe to dramatic group shots. Each one is amazingly detailed, while utilizing the panel sizes to control the pacing, flow, and impact of each moment. When we get close-ups, we can feel the emotions from each character, and the larger shots bring us into the comic’s world.

All the while, Alex Sinclair’s color work keeps things bright and focused. While green is, of course, the most common color in the “Green Lantern” comic, it’s complemented and contrasted nicely with the dark blue night sky, orange light of evening, and bright yellow glow of the creature attacking. The vibrant colors bring each scene to life and help make each image pop off the page.

In short, this new run of “Green Lantern” has everything I hoped for. Even if not every Lantern appears, it still lets us know what they’re up to, while bringing in multiple elements from the DC universe to make the world feel alive and the stakes feel real. I’m very excited to see where this goes from here.

Final Verdict: 9.0 – Thorne’s story brings key elements of the DC universe together with an exciting narrative, backed up by excellent artwork by Soy and Santucci, with vivid colors from Sinclair. An excellent start to a new “Green Lantern” adventure.