It isn’t hard to tell why Mark Russell was nominated for an Eisner Award for Best Writer this year. He is a talented writer and his work on Hanna-Barbera properties for DC has been top-notch. His take on the Flintstones was fresh and classic all at once. He actually added depth to Snagglepuss of all characters. It certainly seems the “Green Lantern/Huckleberry Hound Special” is another success. 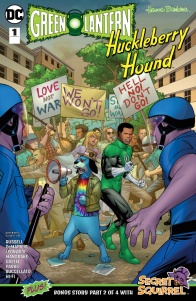 Set against the turbulent backdrop of the early 1970s, Green Lantern and Huckleberry Hound join forces to take a stand on the issues of that era. Returning from recent duty in Vietnam, veteran Marine John Stewart—now a member of the Green Lantern Corps—contemplates what, if anything, he should do about the issues tearing his country apart. Meanwhile, Huckleberry’s comments against the Vietnam war have left him a celebrity outcast, and a visit back home to Mississippi puts him face to face with the Civil Rights Movement. What can one man—and one hound—do? Plus, part two of a Secret Squirrel backup story written by J.M. DeMatteis.

Russell excels at humor but that’s not his only strong suit. He has proven to be adept at providing social commentary and examining history. “The Flintstones” explored religion. His Snagglepuss mini-series analyzed McCarthyism. Social commentary in comics can be especially tricky. Even if a creative team goes in with the best of intentions the results can be tone deaf. Take Ironheart for example. Brian Michael Bendis certainly meant well when he introduced a new black female superhero. Her tragic origin, her stepfather and best friend dying in a Chicago drive-by shooting, seemed over the top and cliche though.

This comic manages to touch on history, race-relations and society without ever feeling forced. The special follows John Stewart as he returns to Earth after completing his Green Lantern training. He is given one command and faces one test. Do not use the ring. The comic poses an interesting question: when is it appropriate to use one’s power? John struggles with this throughout the issue. The Detroit he returns to is rife with social unrest and police brutality. It would be so easy to step in and fix the problem with a wave of his magic ring. Where is the line though? Katma Tui is sure to warn John not to go down the path of Sinestro and abuse that power. It is easier for power to destroy than protect.

Sometimes though, one has to disobey. It is important to know when. Though the comic is set in the seventies, this message is especially timely with the current political landscape. African-Americans being scrutinized and over-policed by white Americans is also, sadly, still relevant to our lives today.

One of the reasons the comic feels so natural is because of the Green Lantern the story focuses on. Since his rebirth, Hal Jordan has been the go-to Lantern but the others can be just as compelling. Mark Russell writes a great John Stewart and he fits perfectly in the story. John dealing with crooked cops in this comic is reminiscent of when he had to do the same in his premiere issue in 1972 (the very year this story is set in). Today, John is more introspective and stoic while he was originally more outspoken, brash and socially active. Russell strikes a nice balance here while also touching on his past as a Marine and architect, as well as his relationship with Katma Tui.

Make no mistake, this is a good Green Lantern story. This is a good John Stewart story. One of the problems though is that it isn’t a good Huckleberry Hound story. Though the two share equal billing, they are by no means equal in the story. Huck acts as an audience surrogate for most of the story, soaking in the details of John’s story with the odd reaction here or there. He has some comedic moments but the comic does not give him much else to do. Huckleberry Hound is not even necessarily crucial to the story. Katma Tui arguably plays a larger role.

Another issue is the artwork. When the panel is tight on the faces, there is plenty of detail. If not, eyes are devoid of pupils or just black dots. Noses and mouths are simply lines. The look of the Green Lantern ring changes over the course of the story. On one page, the Green Lantern insignias are present and on another, they are missing. John served in the Marine but wears a U.S. Army jacket. All of this definitely adds up. Fortunately, the story is told so well that it doesn’t hinder it too much.