“Green Lantern: Legacy” is not only a fun and satisfying DC Kids remix. It’s also an affirmation of Vietnamese American cultural legacies. Writer Minh Lê (author of Drawn Together and Let Me Finish) and artist Andie Tong have created a beautiful exhibition of superhero story as cultural sustenance. 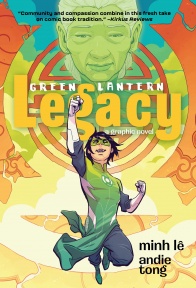 Written by Minh Lê and Illustrated by Andie Tong

Twelve-year-old Tai Pham lives in the apartment above his grandmother’s store, where his bedroom is crammed with sketchpads and comic books. But not even his most imaginative drawings could compare to the colorful adventure he’s about to embark on.
When Tai inherits his grandmother’s jade ring, he soon finds out it’s more than it appears. Suddenly he’s being inducted into a group of space cops known as the Green Lanterns. Meanwhile, his neighborhood is being overrun by some racist bullies, and every time he puts pen to paper, he’s forced to realize that he might not be creative enough or strong enough to uphold the legacy of his ba.

Now Tai must decide what kind of hero he wants to be: Will he learn to soar above his insecurities, or will the past keep him grounded?

As I grew up as an immigrant Chinese American in the 80s and 90s, the Asian American literature I read, while too rare and quite rich, dwelled too much on generational rifts and cultural conflicts, as if explanations (and perhaps apologias) to white America were our main concern.
In contrast, “Green Lantern: Legacy,” a DC Kids graphic novel about new Lantern ring wearer Tai Pham, a 12 year-old Vietnamese American, demonstrates the regenerative power of superhero stories. The ability to be reborn is the comic book superhero’s greatest superpower. I’m not referring to a superpower on the page, but the superpower that stories and mythologies can have, outliving their tellers and taking on fresh meanings.

Teenager Tai is the protagonist of “Green Lantern: Legacy,” but its hero is Kim Tran, Tai’s Bà Nội (grandmother), a Green Lantern of Earth. Tai’s grandmother is an inspirational leader, whether as refugee from Vietnam, pillar of family and community, or guardian of space sector with the likes of John Stewart and Queen Iolande of the Green Lantern Corps. Her demise at the beginning of the graphic novel sets the stand for an uncommon (in Green Lantern world) passing of the torch: her jade Lantern ring chooses as its next wearer her own grandson, Tai.

Tai is a pretty typical teen, brash and brave, artsy and sometimes arrogant and sometimes anxious. Losing his cherished grandmother, he’s comforted by loyal friends Serena and Tommy, who also work on school projects with him and ward off the school bullies from new classmate Hamid. The plot revolves around the intrigue of an Elon Musk-like entrepreneur who knew Tai’s Bà Nội, who is buying up Coast City property like the family’s Jade Market to build a Gold Coast superdevelopment (gentrification alarm), and who becomes the subject of Tai and Serena’s school project to interview an “innovator.” You can guess where the story goes from there.

What makes this book a stunner is not its never-before-seen plot twists (training sequences, costume try-ons, small villains to bigger villains, etc.). It’s not its really solid craft, although the book deserves cheers for craft– the humor is crisp, the characterizations lively, the sequential art both attractively stylish and graphically legible. (More on the craft below).

What astounded me in reading “Green Lantern Legacy” is how perfectly Lê and Tong’s rendition of Vietnamese American experience infuses these familiar superhero tropes and Green Lantern elements with new, particular significance.

For example, new light is shed when the story aligns Tai taking up his grandmother’s legacy and identity with the “brightest day, blackest night” oath. Some of the images of Kim Tran, both as grandmother and as Green Lantern, elicited gasps of awe and joy from me. The set up of Vietnamese-American, multi-generation family business owners having to resist tech-money corporate interlopers speaks to America’s multiethnic identity.

And though we get precious little time with Lantern Tai’s eventual costume, seen on the cover, its blend of Vietnamese tunic and Green Lantern garb visually melds image-memories of nobility and strength that will both mirror and project the meeting of superhero and cultural mythologies that so many of us yearn for.

That’s the beauty– and also maybe the disappointing thing– of these DC Kids graphic novels: they have the task of refreshing these superhero mythologies to reflect young readers. Many have accomplished that task remarkably well, from Mariko Tamaki and Steve Pugh’s “Harley Quinn: Breaking Glass” to the other new DC Kids title of this month, Shannon and Dean Hale and Victoria Ying’s “Diana: Princess of the Amazons.” For my money, I’d put “Green Lantern: Legacy” up there in quality and inventiveness with any of these offerings.

The disappointment that accompanies my excitement is that I wish I could read a monthly DC comic with Tai Pham and Kim Tran Lanterns, or that they might pop up in a Hal Jordan or Jessica Cruz book, and that what makes these creations so powerful wouldn’t be reserved or relegated to kids-aimed graphic novels. It’s not that DC Kids is some minor leagues or second-class outfit, just that it feels shortsighted for DC to let such great storytellers and culture-creation heavyweights run with their imaginations and sensibilities on brilliant takes on characters, and not open the doors for permanent impacts on the DCU. Then again, based on history, no amount of Multiversal or Elseworlds cordoning will keep a popular and influential story or character from eventually making their way in to continuity-laden DC.

Related to that disappointment, though, is my one complaint about the story of “Green Lantern: Legacy,” that it so richly establishes the character, culture, and conflict, but ends it so abruptly, as if it had run out of pages based on some rule of how long kids graphic novels should be. Maybe a young reader won’t mind the length of the climax or how quickly it resolves. But count this as another compliment to how meaningful the story felt, that I was left wanting another fifty pages for the fates of Xander Griffin and Tression, the Jade Market, and Tai’s classmate Hamid to play out.

With all this novel has going for it, my main question for “Green Lantern: Legacy” is, when do we get more? Until we get treated to more of Tai and Kim, until we get treated to Lê and Tong doing more comics, I for one will be passing out many copies of this graphic novel to the kids, Asian American and otherwise, hungry for this kind of superhero story.