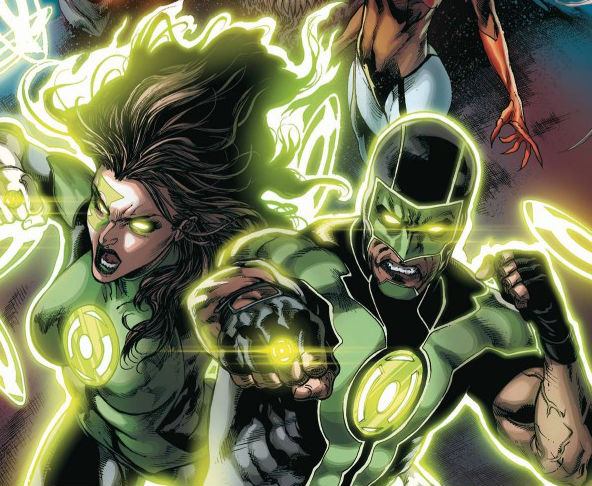 Two of DC’s newest lanterns get a debut that feels less like a rebirth and more like a retread. 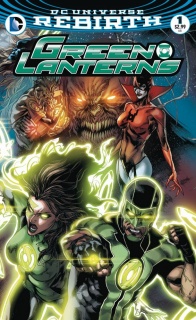 New Lanterns Jessica Cruz and Simon Baz promised to protect others in brightest day or blackest night, but as “Red Planet” begins to rise, the partners find themselves confronted with an unimaginable threat from Bleez and the Red Lanterns!

DC’s latest soft-ish reboot is well and truly upon us, and there’s no shortage of stories on offer for prospective readers. That being said, such a vast slate of potential books does represent a daunting task, especially when you’re being asked to pay $2.99 an issue, sometimes at a rate of twice a month. So I thought I’d dive into a book that, on the surface of things, offers up a perfect mixture of both the old DC and the new: “Green Lanterns”.

The first of two Corps-based ongoing titles to be released, “Green Lanterns” follows the escapades of Simon Baz and Jessica Cruz, the two newest representatives of sector 2814, as they come to terms with their powers and their newly established position in the world. As with almost every Lantern-based title ever put to page, this first issue starts by paying lip-service to the spectrum based origins of the universe – out of darkness came light, out of light came conflict, beings attempted to bend light to their will, bada-bing bada-boom, rings of power – before jumping forward to Baz and Cruz answering a standard extra-terrestrial callout in Arizona. The two rookies stumble across an enraged shut-in with a shotgun who bears the mark of the Red Lanterns. They make short work of the guy, before discovering a Red Lantern plot in its early stages on Earth. However, given that the two lanterns are both nearly as green as the rings that give them their power, they don’t quite manage to stick the landing with regards to containment, and they’re dismissed by an A.R.G.U.S. representative back to their own lives. Jessica finds herself unexpectedly caught up in ‘the rage’ of the Red Lanterns, while Simon suddenly experiences the ’emerald sight’, a chilling vision of a scarlet future that sees the Red Lanterns returned to their former, gory glory.

“Green Lanterns” #1 is writer Sam Humphries’ first foray into the world of DC, and it’s great to see him making strides in that respect, but this first issue doesn’t feel particularly representative of his narrative voice. Green Lantern Alum Geoff Johns helped co-write the “Rebirth” one-shot for this series, and the opener to the series proper still bears many of the hallmarks of his trademark galactic bombasticism, even when it feels almost directly at odds with the more grounded, buddy-cop style that this book is leaning towards. The initial conceit being set up, that a secret power created by a hitherto unknown guardian is about to make its way to Earth, is something that we’ve seen a fair few times before, as are Atrocitus’ rage-fuelled machinations to try and rebuild the Red Lantern Corps.

Humphries’ script does offer up a number of enjoyable buddy-cop moments in the opening of the issue, and this exchange shows he’s got a strong handle on the two distinct personalities of his protagonists that will clearly offer up the brunt of the playful conflict through this first arc. Rocha assists in this section with some playful pieces of mirrored panelling in the opening double-pronged attack that highlight the ways in which our two lanterns are the same, but different. But this lightness of touch  quickly gives way to a more melodramatic style of scripting that reads much more like thinly thought-out caricatures shouting at each other simply to move the narrative along rather than actual conversation. For now, it feels as though there’s little in this issue that hasn’t been previously explored with these characters in their original origin stories. It’s understandable, given the nature of “Rebirth”, but it doesn’t exactly make for gripping reading.

As I mentioned previously, Atrocitus is up to his old tricks again, and he ticks all the boxes of a villain with a cookie-cutter plan designed to spool out with minimal difficulty for our heroes.  Also, oddly echoing ‘that’ controversial X-Men Apocalypse poster, Atrocitus’ introduction shows him choking out Bleez as he chastises her for allowing the Green Lanterns to uncover their ‘Hell Tower’ prematurely. While I’m sure the images were completed months apart, the similarity is undeniable, and the vagueness and moustache-twirlingly ‘evil’ nature of both Atrocitus and Apocalypse’s plans does mean the parallels are there in more than one way.

Rocha’s art is, for the most part, pretty serviceable, but doesn’t stray much beyond that. His well-paced panels are given room to breathe, meaning that for the most part, the story is visually coherent and straightforward. There are a couple of questionable moments during the exposure of the Red Lantern’s latest weapon where Rocha’s backgrounds seem to drop out almost entirely, making it difficult to decide what exactly is happening with the Red construct, but it’s nothing unforgivable. However, much like the script, Rocha doesn’t really offer anything we haven’t seen before in one Lantern story or another. His rendering of Ysmault, the Red Lantern homeworld, is a pretty standard lava-loaded, barren wasteland, and there’s a panel towards the end that shows Jessica in peril as a horde of Rage-fuelled people pin her down that just feels like a scene we’ve all seen before. His fight scenes are pretty dynamic, and he knows how to angle panels to really add a sense of heightened movement to a punch or energy blast, but the two rookies he’s drawing have a limited enough grasp of construct creation that there’s nothing too complex for him to really sink his teeth into yet.

Ultimately, while this book is relatively inoffensive, it seems like a bit of a waste for two newish characters with a strong fanbase and solid potential to explore new stories. Falling back on the trope of ‘old guardian MacGuffin is unearthed and it’s a race against time to stop it’ feels like exactly the kind of safe, slightly cliched storyline that this new, more character-driven universe was promising to distance itself from. However, with a new Lantern book showing up next month, as well as both Baz and Cruz making an appearance in the “Justice League” title billed for July too, their place in the new DCU will hopefully become more interesting as they mature a little.

Final Verdict: 5.4 – If you’re looking for a book to get you all excited about “Rebirth”, you’re going to have to look a little further afield.