You guys remember “Deadhorse”, right? The comic I wouldn’t shut up about? Well, its writer and its colourist have come up with a separate series, this time with Action Lab. And while its premise is less wacky and more straight-up sci-fi, “Planet Gigantic” is still a fun read. 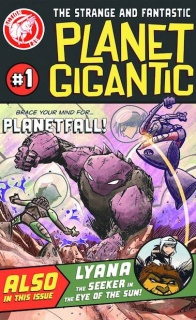 When two genetically-engineered teenagers crash-land on a strange planet, they must learn to rely on themselves and their still-developing powers as they face down a giant rock monster. Also in this issue: Lyana the Seeker braves a cursed tomb in search of the fabled Eye of the Sun.

As the solicit indicates, you get two stories in one here; an installment of the ongoing adventure, and a stand-alone. It’s a versatile format, with both sections gesturing toward the mythic world that is Planet Gigantic itself. At this early moment, though, we don’t learn much about the planet, or how – in the case of the first half of the issue – these genetically-engineered teenagers got there.

Designed to collect data about the universe, and cut off from their protector when their spaceship crashes, siblings Yuri and Valentina are left to negotiate this new world on their own. Grissom’s dialogue gets their personalities across in quick, deft strokes: you’ve got the impulsive one, eager to take his helmet off, and the careful planner, who tests the composition of the air first. As you might expect, this big planet holds plenty of surprises, and they follow an appropriately twisty course as the planet throws different obstacles in their way.

The tone is all-ages without feeling condescending; the perils are serious enough that you feel the danger of Yuri and Valentina’s situation, and the fact that they’re made to suffer a serious loss lends the story a little (PUN ALERT) gravity. But the fast-paced action scenes pick things up again, setting an energetic pace and keeping the focus on the forward progress of their adventure.

All the while, David Halvorson’s work is a little uneven. The weakest moments involve broad skylines and explosions; the compositions don’t quite hold together, and with regard to the planetfall itself, it can be difficult to figure out what you’re looking at. When Valentina and Yuri land, we’re on surer ground. The environments are understated but effective, hanging on solid compositions and straightforward layouts. And the characters are bobble-headed, expressive, and likable, if a little samey.

Of course, as Halvorson’s work on “Deadhorse” would lead us to expect, the colours are wonderful, picking up where a lack of background detail leaves off and adding a dose of atmosphere. The thin, watercolour-like washes make for an interesting effect, and the hint of paper-texture behind it all has a vintage feel.

The short story that rounds off the issue features some of the best art. The dragon that our heroine Lyana faces down manages to be both fearsome and adorable, getting a lot of personality across despite its reptile form and single eye. The monolithic Guardians that kick the story off set a dire tone, and the floating island this creature lives on is imaginatively designed, adding another touch of intrigue and mystery to this planet.

Lyana herself is a bit easier to glom on to, as a character, than Yuri or Valentina – her purpose is bit clearer and she gets to display more direct agency in the context of her story. Plus, her surly steed Syd gets some good lines in. And while the conclusion takes a second or two to figure out, and feels a little hasty, the story stands well enough on its own.

Overall, this first issue of “Planet Gigantic” is pretty good, putting together a mythic world and setting up some main players. Keeping in mind the unpredictable plot of “Deadhorse”, I wouldn’t be surprised if this series followed a similar course; but as it stands, it’s a bit forgettable. The comic engages while you’re reading it but doesn’t give a lasting impression as of yet, and it’ll probably take a look at the second issue to decide things one way or the other.