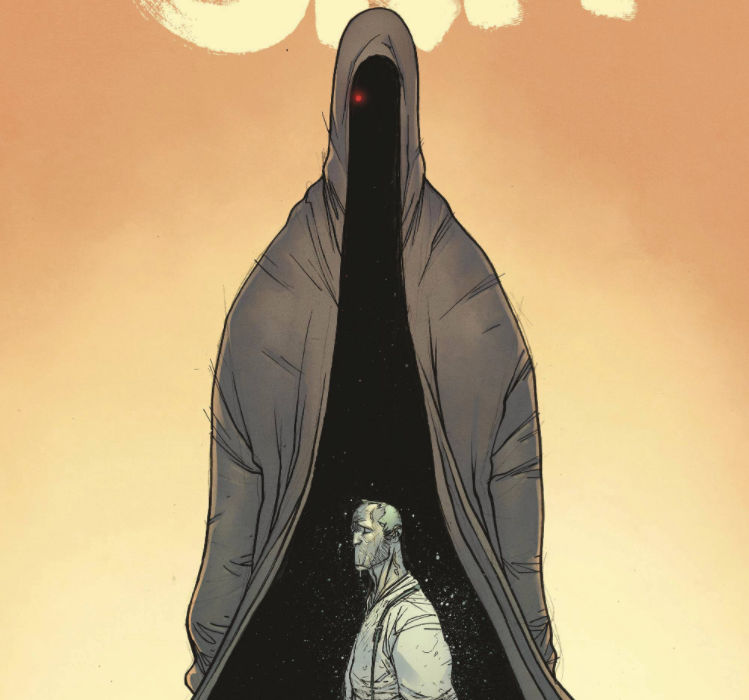 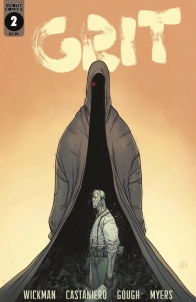 Cover by Kevin Castaniero
Written by Brian Wickman
Illustrated by Kevin Castaniero
Colored by Simon Gough
Lettered by Micah Myers When a mysterious wanderer comes across a mound of slaughtered goblins, she wants answers, and all signs point to Old Man Barrow. Unfortunately for him, she decides to mount her interrogation while he’s knee deep in the swamp, hunting a dream hag. If there’s one thing Barrow hates more than a witch, it’s two witches. Things ain’t looking pretty for our hero, y’all.

“Grit” #2 sees Barrow knee-deep in a swamp to tackle a witch, and a mysterious woman on his trail. Barrow’s not the most brilliant man in the world, but Ari arrives to set him straight – sort of. Wickman, Castaniero, Gough and Myers work seamlessly in this book to create an immersive visual experience heavy on style and humor.

Humor in horror, fantasy and pretty much anything genre these days can be a hard sell. Whedon’s set an unfortunate precedent of quippiness, and almost everything cape and cowl-oriented tries to follow that model. Indies aren’t immune, either. “Grit,” per its title, doesn’t sacrifice its grimness for light banter, and the jokes are blessedly dark. Instead, Wickman incorporates sarcasm and zippy details in a style reminiscent of Eastern European folklore: violence first, levity second. Given the bent nature of Barrow’s reality we should fully expect the crows in this universe to be mouthy jerks, but we may not have known we expected it until they are. Castaniero’s ability to keep the action clear and steady means these one-offs have the punch they need to land, but there’s not too much time spent forcing us to revel in the cleverness of it all. We’re off to the rest of the story after a laugh, and that timing is exactly what we need for the gag to be effective.

Wickman gives “Grit” a narrow scope and each issue has a short timeline, which means Castaniero gets to dig into the action to great effect. Castaniero’s expressive style means we get a hero whose broad chest, thick neck and perpetual scratchy scowl say a lot about who he is as a man, and yet there are subtler details to pore over. The pratfall in the swamp is followed by a few panels of tense exploration, highlighted by the light outlines of sweat on Barrow’s shirt. The full bleed swamp backgrounds mire us just as much as Barrow, but those tiny details are what give the page loads of texture and interest. Castaniero’s cartooning is also extremely effective. Ari’s shorter than Barrow, and the final strip on one page features two panels – one on the left that frames Barrow’s head perfectly, and one on the right that cuts Ari off mid-mouth. She’s berating him (rightfully so, no doubt) and the comedic effect, again, is just right for the moment. The gore that follows isn’t bad, either.

Gough and Castaniero work very well together. Castaniero’s line is a difficult one to highlight, but Gough works hard to add a ton of additional texture, grit and depth to the page. This issue features perfect swampy hues, a nice blue-grey for the swamp witch to set her apart from the backgrounds and a return to the viscous, gushing red of issue #1’s main action. Castaniero also favors the occasional action line or dot texture that breaks the panel borders, and without Gough’s keen attention to detail, they’d feel out of place. Slick digital coloring would sink this book, and Gough delights with clarity, subtle light sources and great washy colors in the flashback sequence. Of special note here are the black marker strokes framing the hovering candles’ spectral blue and orange flame puffs. Gough also shines in action scenes with near-perfect highlighting of Castaniero’s impressionistic blur of limbs and, of course, all those ropy blood bits. “Grit” is a well-wrought book, and the visual acuity here comes from Gough and Castaniero’s combined efforts.

Myers’s lettering is clear but adds a load of style to the book. The left-slanting font feels oppressive, odd and distinct without sacrificing readability, and Myers adds an unsteady stroke to the hag’s balloons and a scratchy font that, done in bold and orange, pops from the navy backgrounds and otherwise dim swamp. Myers’s work on “Grit” showcases good attention to detail, with lots of meaty sound effects and a few subtler ones, like the “SHUNK!” of the dart and Barrows’s earlier “PTEW!” as he tries to spit out swamp sludge. The lettering in “Grit” is expressive but complimentary, and hits the exact level we need to blend with the art but maintain the book’s overall aesthetic goals.

Overall, the only shortcoming in “Grit” might be its overall story scope for some, but that’s hard to clock when the action is so good and the tone is just right. We might want more about Barrow and the world but his is also an intensely personal point of view, and Ari’s introduction gives us some tension to play with, too. It’s easy to sit back and enjoy the small details, chuckles and impressive mood built by this creative team. And, there’s always something to be said for a well-wrought world that doesn’t need to be explained on the page. “Grit” might not be expansive in its in-story world-building, but it’s clear the work has been done behind the scenes. If your taste ranges more toward a tight book done well, this one’s definitely for you.