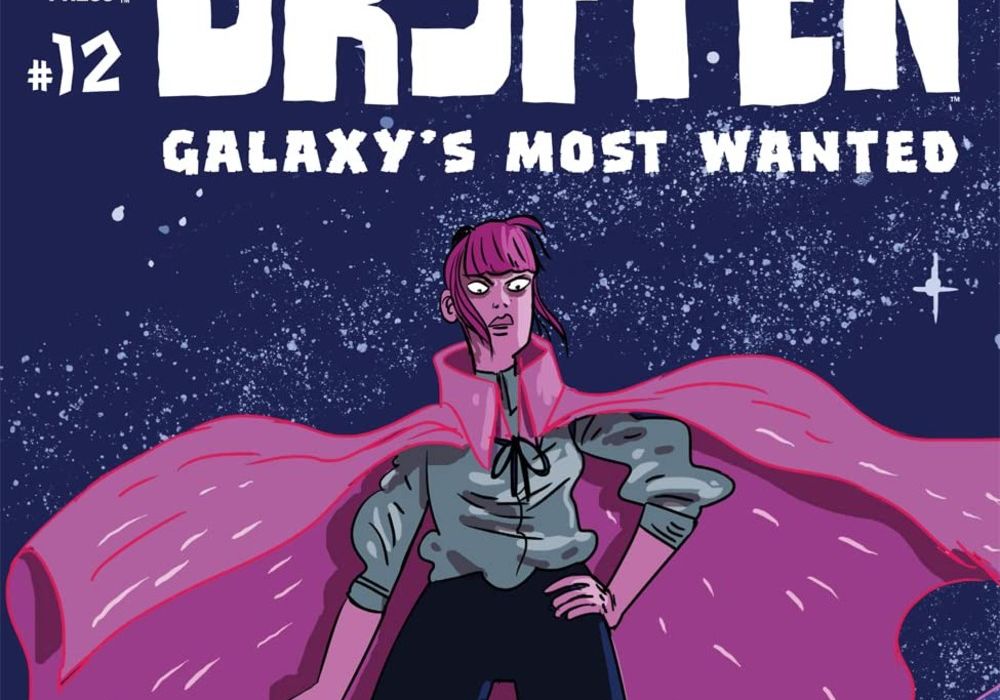 These intros are supposed to be a certain length but this issue contains the line “Cool Motive… …Still Genocide.” and nothing I can write can top that. 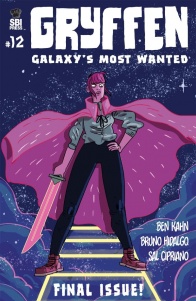 Gryffen vs. Hunter! Telika vs. Davika! Dao and Seti vs. science! The galaxy catches up with the galaxy’s most wanted in the conclusion to Gryffen season 1! Will hilarious anarchy reign, or is the future a Sovereign Reach boot on the universe’s throat forever?

One of the ideas at the heart of “Gryffen: Galaxy’s Most Wanted” is a phrase from the early days of the internet (think 80s): Information wants to be free. Taking place in a techno-cratic, facist space empire (yeah, yeah, I know, facist empire, an oxymoron) where scientific research is banned and kept under lock and key by the ruling body, the tension between our desire for knowledge and the forces at work to artificially constrain and control it takes center stage. Fighting on the side of pure anarchic freedom of information is Lyla Gryffen, the genderqueer, erstwhile captain of the Al-Haytham who gives no shits and wants to watch the whole thing burn to the ground because fuck facisim. After a long journey, it’s time for the final confrontation between them and their ex with the fate of science at stake. There’s action, romance and a fair bit of gratuitous head-expolosions, all while remaining true to the core missions of the series: fuck shit up, free the science, look good doing it. This is where we find ourselves in the final issue of Kahn, Hidalgo and Cipriano’s anarchic space adventure.

Clocking in at 14 pages, “Gryffen” #12 moves at a brisk pace but it never feels short. The fight scenes between Lyla and Hunter are short but meaty, starting and stopping in concert with the motion of the plot. Hidalgo’s fight choreography is kept simple and effective, conveying the weight of each punch and leaving any extraneous motion on the cutting room floor. Hidalgo has a very good grasp of how to make a page read clear, keeping the direction of action consistent throughout. Fights are also an area where Hidalgo’s somewhat loose approach to proportions comes in handy for emphasizing the squash and stretch nature of the fights, heightening the impact of punches and dodges without muddying the panel.

I also particularly love the way Hidalgo draws anger and Lyla’s smug face but faces are also where the art struggles at times. For example, on page 12, Hunter’s hands and body have a solid definition but her hair and eyes seem penciled in and limp. Other times, eyes and mouths are nothing more than lines, or not there at all, breaking with the established lexicon of the series. While a little of this is part of the style of the comic, and is often used as a way to sell a joke, the lack of consistency in figures and faces does become noticeable as the pages near the end of the issue.

This doesn’t detract from the enjoyment of the comic nor the quality of the story being told. There are plenty of times that the stylization is to the comics’ benefit, such as anytime a character’s head is blown off. There’s something darkly funny about the way Hidalgo draws them. Maybe it’s the googly eyes being surrounded by a splatter of bloody. Additionally, Khan’s scripting is fantastic and more than makes up for any artistic hiccups, especially in the humor department. The humor of “Gryffen” might be my favorite part of the whole series.

This is an angry book, but not an unpleasant one, and it channels its anger into a manic, dark humor that laughs in the face of evil, holds up two middle fingers, blows their shit up and then genetically modifies itself to have another middle finger just so it can flip evil off some more. Khan’s scripts are dripping with sharp lines, delivered in a furiously grim, bleak, but ultimately hopeful tone. Every page has at least one moment that will have you laughing or cheering or yelling “fuck you Hunter” along with Lyla.

None of this would be possible without the impeccable lettering of Sal Cipriano. Effortless in its integration onto the page, Cipriano uses all the tools at his disposal to simulate the ebb and flow of conversation without overdoing it. The mix of bold and italics over the slightly slanted font is kept balanced so we don’t have a Frank Miller every other word situation while he maintains control over the letter size to let it breathe when necessary. It’s uneven and rough at times when things are uneven and rough, and clearer in times of calm. Plus, they merge well with Hidalgo’s wonderfully playful SFX.

All that said, there really isn’t much to this issue beyond the fight scenes and the ride off into the sunset after, story and plot wise. . .but that’s what we’re here for. We’re here for the desperate comedy and fuck-the-power-structures-that-hold-us-back attitude. It would complicate the issue, and the series, to try to do more here at the end and the focused, streamlined nature of “Gryffen” #12 is to its benefit, leaving you satisfied but desperately craving more.

Final Score: 8.8. Biting and always funny, “Gryffen” #12 is a fantastic conclusion to a fantastic series. Some art hiccups hold the issue back but the rest more than makes up for it. Plus, the issue is, like, .99¢ digitally and you can get the whole series for less than the cost of 3 Marvel comics. Go pick it up now!